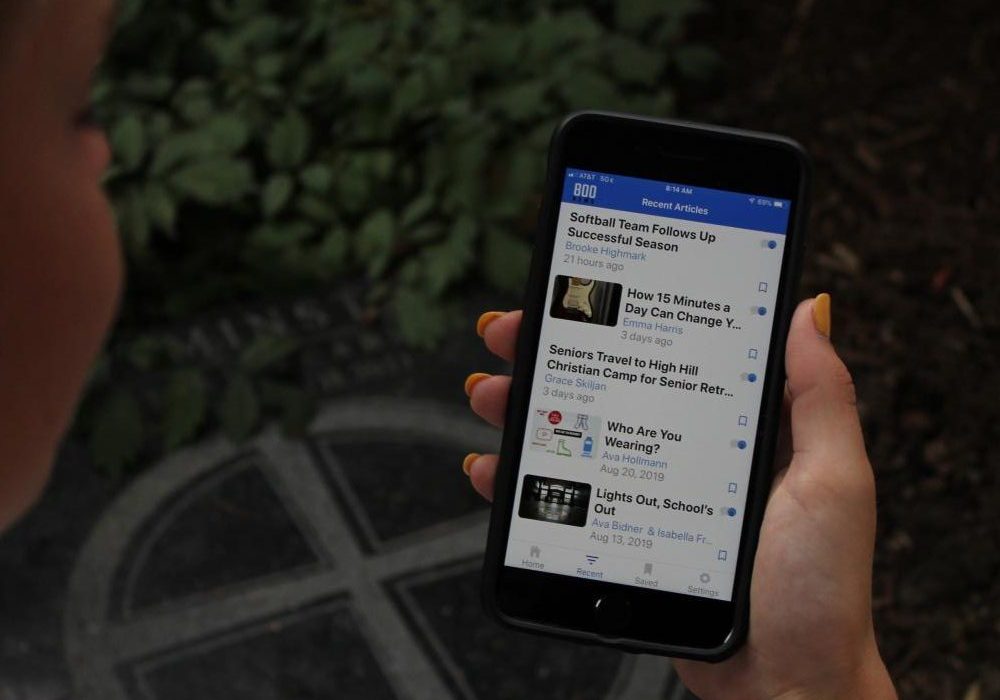 Students using their phones at school is a key issue that has been addressed this school year. (Ava Bidner)

Students using their phones at school is a key issue that has been addressed this school year.

As Westminster students were welcomed back into the building this year for the first week of school, they were confronted with several new changes. From all of the new faces to the presence of a student council to new leaders and teachers, Westminster is prepared for a fulfilling upcoming 2019-2020 school year. Another new change? The new phone policy — a topic that has filled the halls with conversation, opinions, and complaints. But before making up your mind, let’s listen to the reasoning behind the new phone policy and consider the change from the administration’s point of view.

“The problem is really two-fold. One, we want to eliminate distraction. The second thing is we want to improve and enhance our community. I think all of us have walked through the Hub or the Cafe or the hallways and seen how many students are staring down at their devices rather than engaging with their classmates and friends. We are very intentionally framing this as an academic issue, not a disciplinary one,” said Micah Gall, Head of Academic Development.

In past years, most teachers expected students to have their phones turned off and put away in their backpacks during class. Phones would be taken out occasionally to take pictures, play games like Quizlet or Kahoot!, or simply communicate when necessary, but in general, phones were not intended to be a frequent tool in the classroom. But after phones were taken out, even for a quick activity, it was often difficult to reel students back in and bring the focus back on the teacher and the discussion or task at hand. Some teachers combatted this dilemma by placing a cell phone holder by the door, asking students to put their phones in the pockets and to give their full attention for the whole class period. But this loose rule was only implemented by a few teachers, and administration, as well as the wider Westminster community, believed a more universal policy was necessary in order to solve these focus issues and cultivate a better learning environment filled with fully engaged students and teachers.

“The two main goals are fostering community and creating focus. It’s really those two things. Over the past few years, we have seen the classroom, and the community get a little disjointed, and I think there was enough talk and consensus that we needed to do something about this issue. Many schools around the country are in a similar situation, and we felt like this was a policy that would definitely point back to what we are about here anyway. We wanted more consistency in our values and policies,” said Chris Pederson, 11th and 12th grade principal.

As Pederson explained, the reasoning behind the new phone policy was not solely academic-based. The Westminster community has begun to perceive a disconnect between students and their peers, teachers, and administrators, and the overuse and over-reliance of technology have been determined to be the culprits. Not only were cell phones often a distraction in the classroom, but they also often caused interruptions during lunch, study hall, and even passing periods, hindering students from interacting and engaging in conversation.

Recognizing these many concerns, our school did not want to continue to simply observe the problem without taking action and making every effort to restore a safe, effective, and fulfilling learning environment and the overall community. Although the decision and policy may have seemed sudden to many students, the discussion was actually in the works for months.

“There was a committee of teachers and administrators that met last year. They considered technology use in general with student and parent feedback. As the year went on, there was growing clarity of what they wanted to change. By spring of last year, they made a recommendation,” explained Pederson.

Although the policy has been developed and thought through extensively, this does not guarantee in any way that the transition will be easy. Students already have worries about how they will contact their parents and coaches during the day, whether they will be aware of important information regarding their extracurriculars, and how they will stay in the loop about their job schedules, family matters, and essential texts or calls.

All that being said, no one ever claimed this new policy would be easy — just that it would ultimately leave a positive impact on our community and lead to greater rigor, relationship, and restoration, three key aspects of Westminster’s academic approach. And in general, changes are almost always difficult, and there will be an adjustment period before the school begins to fall into a routine with this new policy. 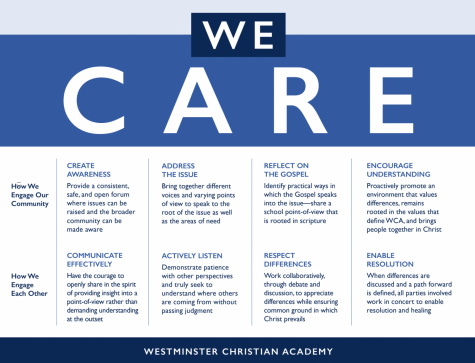 Ava Bidner
Westminster’s stance on the phone policy from the student-parent handbook.

“On the positive side, I have already seen some of the benefits. There is a different demeanor and tone in the classrooms now. As I drop in and walk through the classrooms, I think there is a layer of focus that has traditionally, in the past few years, not been there. We are also hearing this from parents and teachers alike. There just seems to be a different tone in the room without the constant reminders and the awkward situations that were prevalent so often in the past couple of years,” said Pederson.

Unfortunately, as teachers and administrators have already seen, this new policy will undoubtedly be accompanied by disciplinary actions when necessary, which is not fun for students or those in authority. However, as Gall stated, the premise of this new policy is to improve the academics and community, not to increase discipline.

“The negative is that it increases the opportunity for hard conversations. It’s uncomfortable for a lot of people to be put in a situation where a phone is out, and now they have to act. But on the flip side, [the policy] is supportive of a good, healthy community. So, I think there are two sides: the reality of it leans into hard conversations, but at the same time it supports the community and the focus aspect,” said Pederson.

In order to truly obtain results from this policy, enduring the challenging start and difficult conversations is necessary. Like most great achievements in life, achieving successful outcomes usually begins with dedication, struggles, and perseverance through uncomfortable or adverse times.

“I hear from kids a lot that they’re thankful, even though there is an understandable resistance to it. I think all across the board teachers have been working for consistency in this like never before, and I think they are starting to see the fruit of [these changes]. The kids who talk to me personally have affirmed that it is [helpful] even though it’s difficult. I just want to thank the community for working through the hard stuff. It’s a complicated thing because you have people willing to recognize that [technology] gets in our way. It’s a benefit, but it also gets in our way, and we have to figure out how to navigate the temperance of the use. And a lot of times, there is a disciplined nature that has to come in. There is a discipline to taking time [away from technology], putting things down, shutting down screens, and saying ‘I’m just going to focus right now.’ And I’m thankful to the community for being willing, by and large, to move through this discomfort,” said Pederson.

Overall, this policy will require patience on all sides, frequent guidance and reminders from teachers, and flexibility and willingness to engage from the whole community. One piece of life at Westminster has changed, but the hope is that as a result, this year will bear tremendous fruit — academically, relationally, and spiritually.