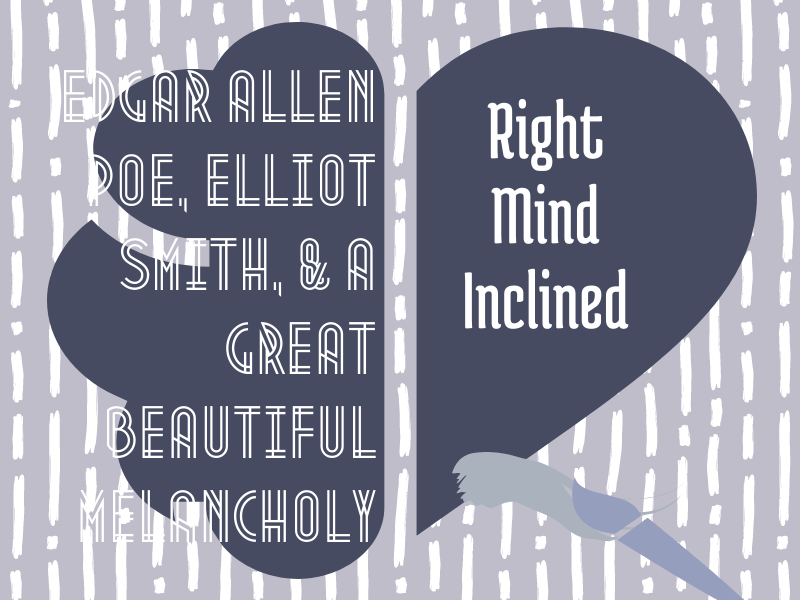 Melancholy is beautiful, and it seems most every poet is attracted to the dismal, passionate, dreamy, musical, lonely personality of it. The infatuation for sadness and melancholy has been present in poetry and music since poets first picked up a pen and musicians sat down to an instrument. Take the most famous example of a melancholy poet: Edgar Allen Poe, known for his macabre, atmospheric, darkness laced poetry. He often dwells upon melancholy and sadness, expressing his deep fondness for them within multiple different lines: “And being so young and dipped in folly, I fell in love with melancholy,” being an example (I’m aware the irony of using this specific quote, but it still makes the point of his love for melancholy). I can’t help but feel the exact same liking towards sadness, and Elliot Smith felt the same way too- which, in turn, is why I also love Elliot Smith.

Tragically, Elliot Smith died at the young age of 34 after two stab wounds in the chest, one of them piercing his heart in a fitting, incredibly depressing poeticness (although it was originally ruled a suicide- which was so easily believed because of his history with addiction, depression, and suicidal thoughts- many have come to the conclusion that it was murder. I mean, his own name was spelled wrong on his two-line-long ‘suicide note,’ for Pete’s sake). But before his death, Elliot Smith was a singer-songwriter known for his melancholy, depressing songs (earning himself the moniker “Mr. Misery,” a play off of ‘miss misery’) and was once pegged as “the unhappiest man in all of the land” by newspapers. His music and lyrics are, as you would guess, a perfect, melancholy paradise, especially for outsiders and wanderers. They’re absolutely gorgeous and captivating, and I’d highly recommend listening to Smith (my favorite songs are ‘Waltz #2 (XO)’, ‘No Name #1’, and ‘Between The Bars’ at the moment). Though Smith never directly stated it as far as I know, there is a clear attraction towards melancholy that stands out in his music.

But why is melancholy so enthralling? Why are Edgar Allen Poe and Elliot Smith so enchanted with it, and why is their love infectious? Why is melancholy so addicting and beautiful? Why do some continuously return to an emotion that makes the heart ache? Is it mad to do so? Perhaps, my friend, perhaps. But it is beautiful nonetheless (or perhaps even the greater).

Here’s why both I, many poets, and many musicians love melancholia so incredibly much.

Melancholy is the happiness of sadness. It’s pensive thoughts, existentialism, a philosophy, gloomy yet passion infused rain, an infinite mystery novel that forever carries my curiosity. It is a complex existence, encompassing many- and often paradoxical- emotions and states of beings (though in varying intensities); sad with a small little dash of happy or hopeful, discontent and yet somehow satisfied, satisfied and yet somehow discontent, detached, too attached, restless, mellow, pensive, lonely, curious, lost and found. It’s an entirely unique emotion and aesthetic. It’s not looking to change you, nor will it judge you. Melancholia is an incredibly accepting place to visit, one where everyone fits in and can relate to, a place where people can turn their painful emotions into poetry or art. It knows what it’s like to be a loner, so it doesn’t want to make anyone else feel like one. It has a comforting ‘come as you are’ air to it, an atmosphere that says “let’s wallow in the tender sadness together.”

What more, melancholy inspires thought and introspection. It’s not a type of sad you try to avoid or ignore, it’s one you explore and ruminate upon, which is why it’s so heavily linked to poetry, an introspective, thoughtful, and emotional process and being. Melancholy is the result of an eclipse of emotion and thought, and the great spectacle it creates is the perfect poetry fuel.

And here is the final beauty of melancholy, or at least one of the last I can think of (which is certainly not all of the reasons). In sadness, in darkness and pain, we can relate to others.

WHY I WALK INTO THE ARMS OF SADNESS

In the vastness of despair,

I can sit quite comfortably there,

Because I know it will pass soon enough,

The storm on the ocean will blow over,

And underneath it’s retreating waves,

It will leave behind a bed of clover,

Slender ferns made of paper,

And new stories that beg of me to write,

And though the waves left me shivering,

From a blend of frost & fright,

All that was sorrowful is now beautiful,

And the ocean is deep azure & calm,

The duty I have been divinely tasked to fulfill,

To help those hurting & lonely feel they belong,

To give understanding & hope through poetry & art,

That rests in the depths of my heart,

Has been made possible by the dark,

For I become a sufferer to relate to,

So that no one may feel alienated,

For I become a survivor to inspire people,

To give hope for soldiers fighting despair,

And I know when the ocean calms,

And the horror subsides,

What was miserable is now the most beautiful sight.

With a fondness for melancholy,
Emma Harris