When a Multibillion-Dollar “Death” Industry Captures the Living

Behind the bright promise of an end-of-life industry, hospice care masks a darker truth leading you to question whether it’s truly worth the risk. 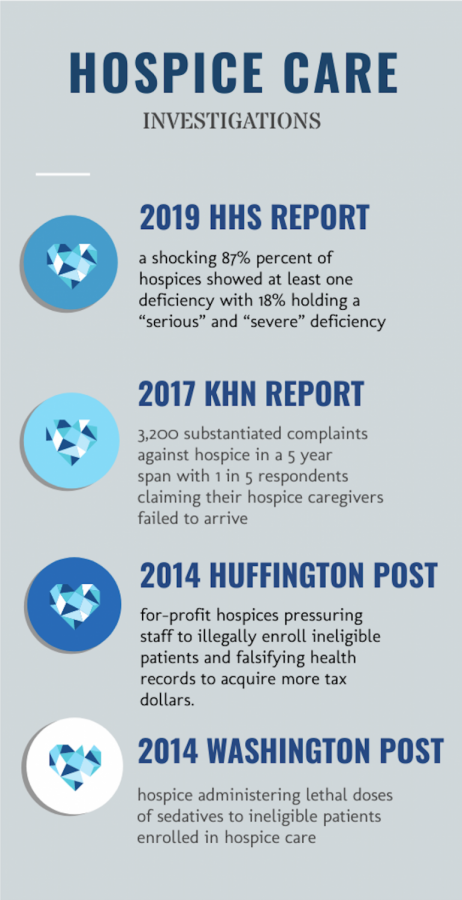 When a Multibillion-Dollar “Death” Industry Captures the Living 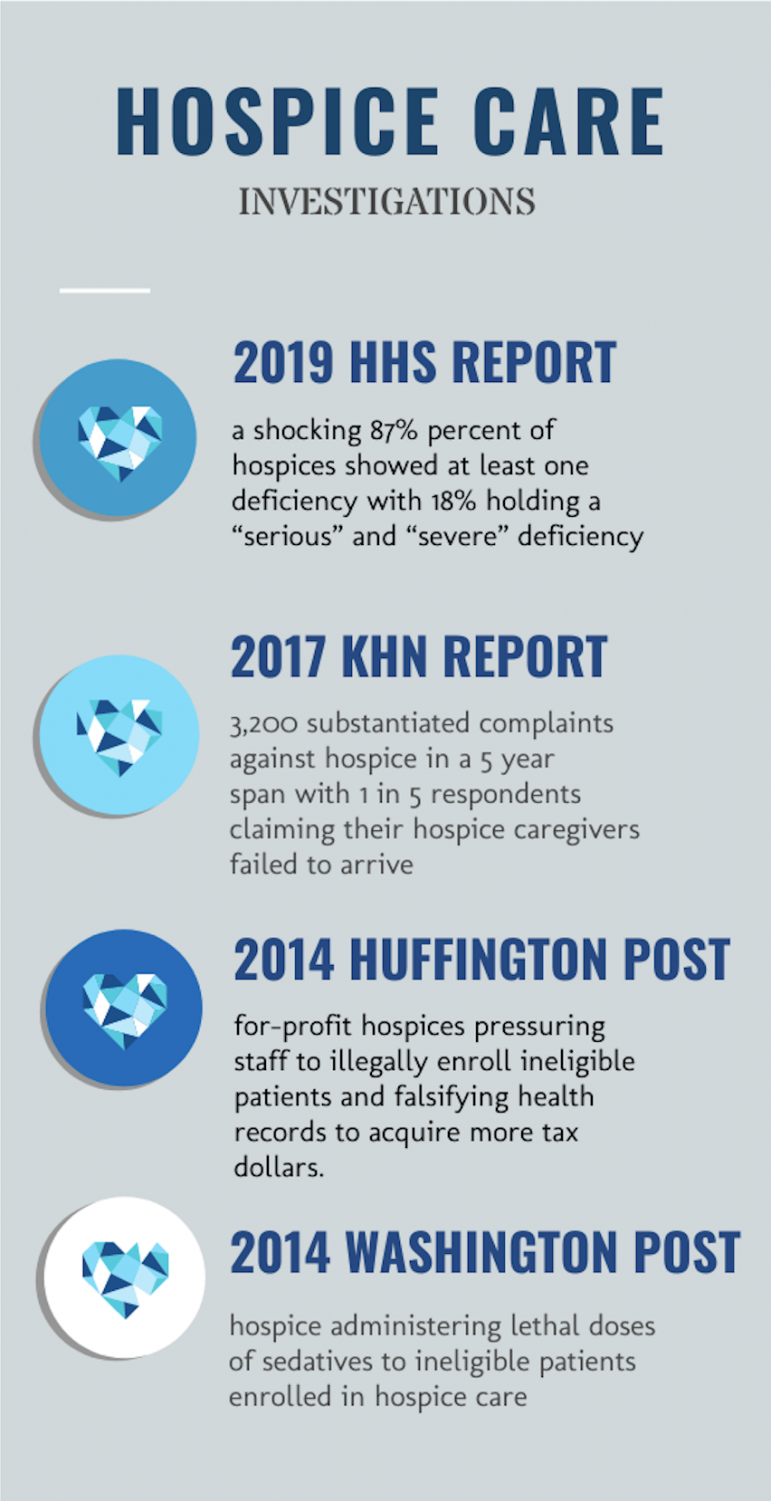 In a gripping anecdote published in the New York Times, reporter Karen Brown exposed the heartbreaking account of her father’s death: the story of how a supposed painless exit was countered by a devastating reality. Stricken with terminal pancreatic cancer, Brown’s father sought in earnest a “good death”—a peaceful, humane passing surrounded by loved ones and caring professionals—that trained experts in hospice care promised.

But as the patient confronted a sudden spike in pain, hospice failed to live up to that promise in the moments that counted the most. At 7 p.m. on the first night, Karen Brown anxiously awaited unanswered calls, only to receive one later cavalierly stating that doctors were unavailable. By midnight a hospice nurse finally arrived, without painkillers to alleviate the protracted suffering. Next in line, a “crisis nurse” was scheduled to arrive at 8 a.m. the next morning. The hours 12 p.m., 1 p.m., 3 p.m. passed without a nurse in sight. It was not until 4 p.m. that aid appeared, but by that time, there was little left to do. Brown died an hour later—in pain, turmoil, and utter disappointment.

As an aging society, most people carry an awareness of this “innovative” type of assisted death that enrolls over 1.4 million patients each year. As the refined model for terminally-ill candidates, hospice offers home-based, palliative focus as opposed to aggressive treatments, largely the byproduct of the push against the over-medicalization of death. It places great emphasis on the family, pledging around-the-clock service to tend to patients’ physical, emotional, and spiritual distress. What more can someone ask for than compassionate, attentive care rather than a sterile hospital room under the impersonal watch of shift employees?

While the hospice philosophy appears laudable at surface level, deeply embedded in the layers rests a grim actuality. Near the end of life, one’s fateful departure undoubtedly precludes the guarantee of a straightforward outcome. But at the very least, a kind-hearted, tender-minded, person-centered hospice industry assures the companionship of palliative nurses by their side.

Yet, there were none to be found—for the Brown family and countless others. Horrifying reports reveal hospice employees abandoning patients at their deathbed, met with delays, no-shows, and unanswered voicemails, according to a 2017 Kaiser Health News investigation. The KHN report uncovered a total of 3,200 substantiated complaints against hospice in a 5-year span. Furthermore, a national Consumer Assessment of Healthcare Providers and Systems (CAHPS) hospice survey indicates these instances remain relatively common, with 1 in 5 respondents claiming their hospice caregivers failed to arrive. From labored breathing, severe dehydration, and unexpected seizures, patients and families all too often find themselves facing death’s door alone.

However, accountability for such inferior service remains negligible. Little—if any— of the cases provided recourse for the irreparable harm. Once again, hospice failed to deliver, forcing some to grapple with the sobering reality of placing their loved ones in questionable hands.

Alarming reports such as these spawned the discovery of further gross negligence and patient abuse contaminating hospice centers across the country. In recent news, the hospice crisis garnered attention as the U.S. Department of Health and Human Services’ inspector general released two scathing reports in August 2019, specifying the “significant vulnerabilities” and “deficiencies” that “jeopardize safety” of patients in hospice care.

Horror stories abound, including instances of finding maggots in stomach feeding tubes, failing to clean wounds resulting in leg amputation, and providing inaccurate treatment that led to multiple hospital visits. In fact, the HHS study found that a shocking 87% percent of hospices showed at least one deficiency with 18% holding a “serious” and “severe” deficiency, suggesting the need for immediate intervention. In these cases, hospice declined to comment.

But the organization cloaked in mismanagement, inadequate assessments, poor quality control, and marginal staff vetting offer only a glimpse into the larger, systemic problem. Sadly, it gets much worse.

As for-profit hospice providers invaded the originally intended-nonprofit agencies in the 1980s, the death industry burgeoned into a lucrative business, receiving nearly 18 billion federal dollars annually. Now, the 4,000 certified hospices exist within the larger healthcare framework of Medicare, collecting a flat daily rate of taxpayer money regardless of treatment or time spent with patients.

As history demonstrates, big business inevitably foreshadows behind-the-scenes corruption—and hospice has become one of them.

In the growing end-of-life movement, we assume that hospice operates with the patients’ best interest at heart. But with the stakes high for a billion-dollar industry, this reality is far from the truth. If suffering as a result of incompetency is not disturbing enough, some unsuspecting victims met their fate through intentional deception as well.

Because Medicare currently accepts vague definitions of “terminal conditions” including “failure to thrive” and “debility” as qualifications for hospice, a porous threshold opens the door for abuse. In one of the top Huffington Post exposés by Ben Hallman, mounting evidence points to hospice care providers imperiling patients in a drive to boost revenue. The 2014 investigation discovered for-profit hospices pressuring staff to illegally enroll ineligible patients and falsifying health records to acquire more tax dollars. In other words, not all diagnosed hospice patients met the standard 6 months-to-live criteria of  hospice. Why? Healthier patients require fewer visits and longer stays, pumping up the monetary rewards for the booming industry.

In a series of articles, Washington Post reporter Peter Whorisky uncovered further repulsive evidence pointing to the same culprit. Investigators found patients ingesting lethal doses of sedatives administered by hospice. These patients weren’t even terminally ill, yet faced death from an excessive amount of painkillers. With additional stories of patients prematurely snared into hospice, one can only wonder the extent to which slow homicide under the guise of palliative care is perpetrated.

Thankfully, thousands of people share more positive portrayals of hospice and vouch for its value. For these families, the program worked as it should, providing compassionate support to those legitimately on the verge of death.

But I speak for those whom it did not.

The devastating stories and undeniable facts unmask the inadequacies, fraud, and corruption plagued across hospice centers in recent years. While noble in its founding mission established in the 1960s, today’s hospice providers have undermined their own goals.

Medical experts, plaintiff’s attorneys, and disgruntled families challenge the protocol, proposing viable interventions to rehabilitate a flawed system. With initiatives such as a Hospice Compare website and nonprofit programs, reformers seek avenues to combat abuse and lack of transparency. The Trump administration’s HHS report recommends the next step forward: a tighter oversight of hospice, laws to enforce violations, and a vehicle to publicly report grievances. Yet to hold hospices accountable for their actions, the power ultimately resides in Washington D.C.

But in the end, can we truly rely on abstract government policies and detached politicians to ensure the safety and well-being of our loved ones? Probably not. Therefore, it is our civil and ethical duty to demand more of ourselves and others—to ensure that each and every human experience a dignified and “good” death if we possess some semblance of control over one of life’s most uncontrollable circumstances.