“Fish are Friends, not food” 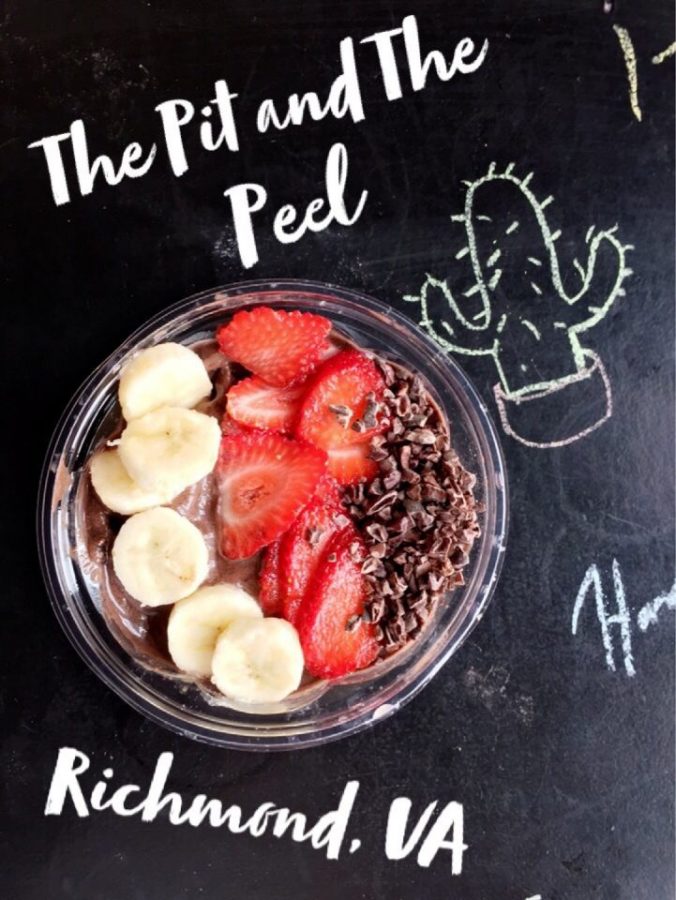 “Fish are Friends, not food”

A quick scroll through Instagram or a stroll down a grocery store aisle yields an abundance of vegan or vegetarian recipes and options. These diets have become both more popular and more accessible over the past few years, and people all over the country and globe are choosing to try them. Adding labels like “gluten-free,” “non-GMO,” “organic,” “gluten free,” and especially “vegan” instantly boosts a product’s health factor in the eyes of many people who trust these labels ensure the product is healthier. But is this really truly? And what are the pros and cons to eating a vegetarian diet or living a truly vegan lifestyle? And most importantly, what is the best and healthiest decision for a teen with a growing, developing mind?

Today, veganism and vegetarianism are growing at a rapid rate. According to a 2016 poll conducted by the Vegetarian Resource Group, approximately 6-8 million adults in the United States do not eat meat, fish, or poultry. In addition, several more million have eliminated red meat from their diets. And these statistics do not even include teenagers. About 2 percent of youth in the U.S. from ages 6-17 never eat meat, fish, or poultry, and approximately 0.5 percent of American youth are vegan.
While this number may not be the majority, the trend is on the rise as vegan food becomes both appealing and more accessible, teens become more concerned with caring for the environment, and many celebrities and internet stars “pave the way” as vegan role models (according to Plant Based News).

“I started eating vegetarian because of health concerns. However, once I researched more, I realized how horrible the conditions of the meat industry are for the animals, and so now I also eat vegetarian to not support those practices,” said Grace Johler, senior, who has been vegetarian for a year and a half.

In addition, data shows that while the percentage of vegetarians may be mostly equally dispersed among age ranges, the vegan “movement is driven by the young,” as the Guardian reveals. Research by the Guardian proves that “close to half of all vegans are aged 15-34 (42%), compared with just 14% who are over 65.” These studies show that the vegan lifestyle is taking millennials and even the next generation by storm, likely due to the exposure on Instagram, Pinterest, and YouTube, in addition to teenagers’ desires to have a positive impact on the planet. 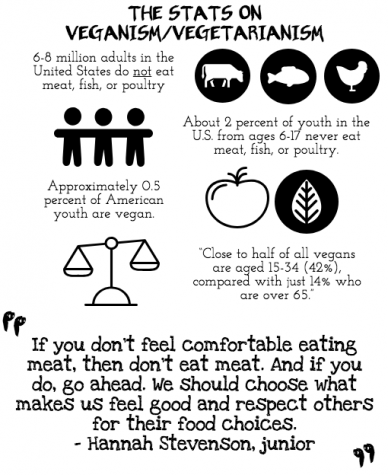 Vegans are considered total vegetarians and choose to not only abstain from eating meat, poultry, and fish, but also any and all products derived from animals, including eggs and dairy products. The greatest distinction between vegetarians and vegans is that most vegans choose to not only be involved in the diet aspect but also to embrace a completely vegan lifestyle, avoiding the use of all animal products, including leather, beeswax and honey, gelatin, keratin, fur, silk, wool, and cashmere. These ingredients are derived from animals and are not only used in the production of foods but also in self-care and hygiene products, clothing, and textiles. Living a truly vegan lifestyle requires a commitment to refrain from all animal products, which can be an extremely difficult and time-consuming task, as well as dedication to the environment and to a healthier personal life.

“I’m vegan for health, environmental, and ethical reasons. A wide variety of diseases and common health problems arise from eating meat and dairy. Furthermore, these industries demolish natural landscapes, pollute the air, and frequently force their animals into unnatural, inhumane living conditions,” said Hannah Brown, senior, who has been vegetarian for a year and a half and vegan for over five months.

Of course, the main concern with these diets is how those who selectively eat meat consume enough protein, energy, and nutrients. Proteins essentially control the entire body and all of its functions, and the dietary intake of proteins is vital because some important amino acids, the smaller subunits of proteins, can not be synthesized by the body. Required for the structure of tissues, organs, and cells, proteins regulate body processes, help provide cells and tissues with stiffness and rigidity, and act as antibodies which help fight infection from harmful foreign pathogens like bacteria and viruses. Protein is also imperative for muscle growth, strength, and repair.

While protein may be more difficult to incorporate into a vegetarian or vegan diet, it is not impossible. Animal foods are often considered complete proteins because they contain all nine of the essential amino acids in the right amounts, and they are also generally easier to digest. Plant-based proteins are protected by cellulose and are therefore more difficult for the body to digest in comparison to animal proteins. They also tend to lack one or more of the essential amino acids, making them incomplete proteins.
But with a conscious effort and dedication to eating vegetarian or vegan and still consuming enough protein, it is completely possible to incorporate the necessary nutrients into one’s diet.

“A health concern most people express to me is that there is a lack of protein in the vegetarian diet. However, I get plenty of protein from beans, nuts, tofu, and lots of other plant based foods,” said Johler.
While these diets may require additional effort when ensuring that there is enough protein and other nutrients in them, they also provide many convenient health benefits that are difficult to obtain when eating meat and dairy products frequently.

These diets have also become controversial over time as stereotypes have developed and people criticize others’ food choices. The decision to become vegetarian or vegan can be a life-changing step for someone, but it really does not involve anyone but the person, and in the case of a teenager, his or her parents and doctor.

“People generally stereotype vegans as earthy hippies or health-obsessed dieters. However, as more people educate themselves on veganism and solely eat plant-based food, the stigma begins to dissolve. I believe that society should continue to increase acceptance of veganism and actively promote the lifestyle to mend human relationships with the earth and with animals,” said Brown.

There are many motives for vegetarianism and veganism, including concerns about animal welfare or the use of antibiotics and hormones in livestock, a desire to avoid excessive use of environmental resources, and of course health benefits such as less saturated fats, lower LDL cholesterol, more vitamins, minerals, and fiber, and lower blood pressure.

“Vegetarianism and veganism have greatly increased my awareness of how irresponsibly humans often treat our resources and fellow life forms, and I now seek to reduce my part in such unnecessary destruction,” said Brown.
Overall, the decision to become a vegetarian or vegan, especially as a teen, must be made on an individual basis. As teens engage in constant activity, they need to ensure they are receiving enough essential protein and nutrients to feed their growing minds and bodies. For some this may mean a diverse diet of animal products and plant-based foods, while others may function best on a full plant-based diet like vegetarianism or veganism.

“I think that vegetarianism helps promote a healthy lifestyle if executed correctly. It also brings me more energy because of my lack of junk food and fast food,” said Jacob Moyer, junior, who has been vegetarian for three years.
The American Dietetic Association claims that “appropriately planned vegetarian diets, including total vegetarian or vegan diets, are healthful, nutritionally adequate, and may provide health benefits in the prevention and treatment of certain diseases.”
The key phrase here is “appropriately planned” because vegetarians must consciously focus more than meat-eaters on consuming enough protein and following other nutritional guidelines, such as consuming enough healthy fats.
Hannah Stevenson, junior, is not a vegetarian but understands the situation well: “If you don’t feel comfortable eating meat, then don’t eat meat. And if you do, go ahead. We should choose what makes us feel good and respect others for their food choices.