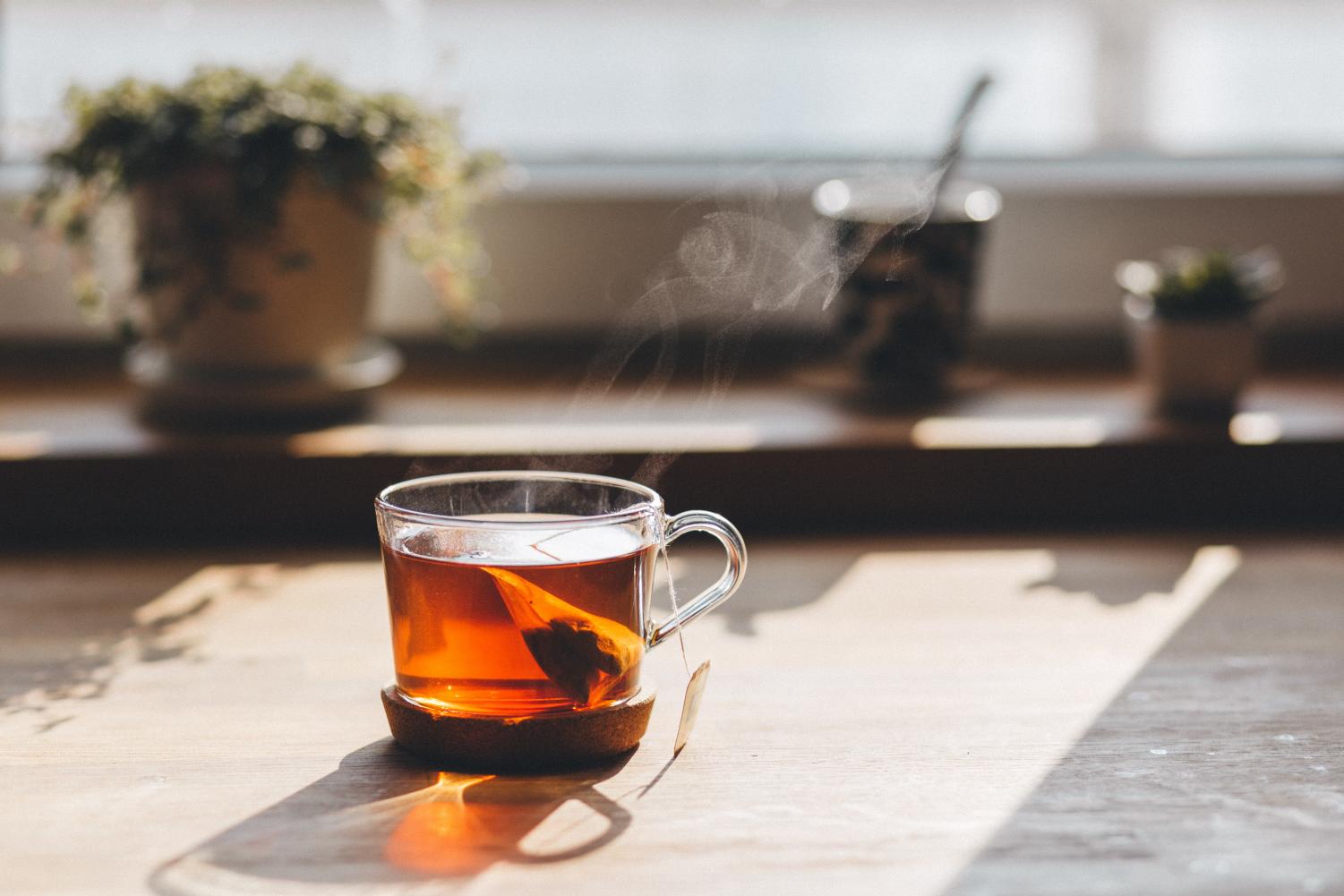 Tea isn't that sweet after all. (Pixel )

Tea isn't that sweet after all.

Time to “Spill the Tea”

Dating back to ancient Chinese culture, the quintessential cup of tea has been a universal product touted for its medicinal and therapeutic properties. Laden with a medley of exotic spices and hints of floral extracts, the endless variety of teas remains a cross-cultural favorite. According to the Tea Association of The USA, Americans alone consumed 3.8 billion gallons of tea in 2017.

But buyer beware: there is something else lurking in your cup of tea linked to serious complications. In various experimental studies, researchers have discovered a staggering number of pesticides and other carcinogenic chemicals in popular name-brand teas. The independent research company CBC News Canada used an accredited lab to conduct a thorough investigation testing the levels of pesticide residue in a variety of teas. The results of the study were beyond shocking: Over half of popular tea brands tested contained extreme pesticide levels and other chemicals that exceed the legal limit. Ranging from 8 to 22 different chemicals, well-known tea brands like Lipton, Tetley, Twining’s ranked among the highest in pesticide contamination.

And this study does not stand alone as numerous research organizations have discovered dangerously high levels of harmful pesticides. In an analytical pesticide residue study published in the 2014 Food Chemistry journal, researchers detected traces of eight different pesticides in various teas. One particular pesticide, fenitrothion, was excessively high with an amount that was 35 times higher than the Environment Protection Agency’s (EPA) recommendation for a “safe” pesticide level.

Organic teas are no exception. While “natural” and “pesticide free” labels appear enticingly healthy, various studies have proven certain labels to be extremely misleading. Of the teas tested in a study from The Journal of Toxicology, 70% of the teas tested, including organic, contained toxic contamination of lead and other metals as a result of the accumulation of fluorine from the soil.

These results are alarming, especially to the daily tea-enthusiast. In recent years, a growing concern has surfaced between the potential association between pesticide-laden tea and disease. The legitimate concerns of tea contamination are gaining traction among health forums and media outlets, with various newspapers reporting on tea-drinkers plagued by serious ailments. One article from The Atlantic shared the harrowing story of a 56-year-old heavy tea-drinker suffering kidney failure from tea consumption. And unfortunately, research substantiates this worrisome connection. 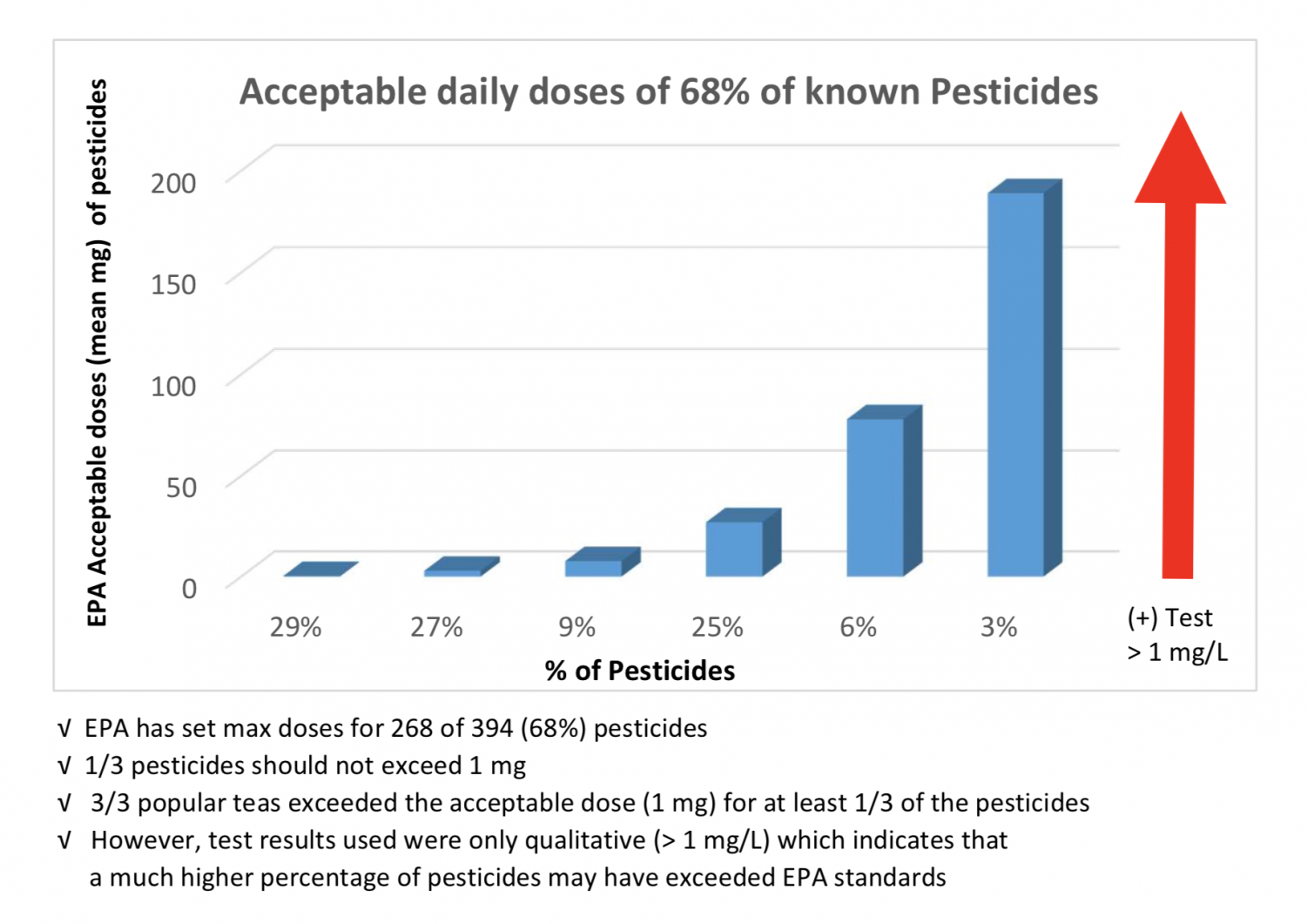 According to several studies, certain pesticides discovered in tea samples pose serious health threats, ranging from minor illnesses to potentially life-threatening conditions. For example, two specific pesticides, endosulfan and monocrotophos, and several other carcinogenic chemicals found in teas have been banned in other countries for their serious health implications.
Additional research uncovered a correlation between cancer incidence and pesticide exposure in tea. A published review article that investigated the cancer health effects of exposure to pesticide found a consistent association for brain and prostate cancer as well as kidney cancer in children. Another 2014 study discovered a shocking five-fold increase in the risk of development of lung cancer related to tea consumption, while a higher exposure to pesticides in general, increased the risk of lung cancer.

The dangerous effects also extend to the traces of metals found in teas. Research has suggested that fluorine toxicity and other hard metals may be linked to health problems such as osteoporosis, joint pain, kidney problems, and even Alzheimer’s disease. But to truly understand the toxicity problem, we must look to the cause. The root of the pesticide issue emanates from the source: the foreign tea industries. For centuries, China and India have maintained their prominent role as purveyors of tea, with China harvesting about 1.2 million tons of tea each year. Their food safety record is hardly perfect, however, tainted with a history of contamination, pollution, and insufficient oversight. For optimal tea cultivation, the leaves are routinely blanketed with harmful pesticides that are likely transferred into your cup of tea during the brewing process. However, tea companies are not the only culprit, as pollution and environmental factors emit contaminants, increasing the toxicity of tea. The issue with tea contamination is thus a much broader ecological issue that presents difficult impediments extending beyond a simple solution.

It is up to the United States government to regulate and monitor the importation of dangerous chemicals and respond appropriately to the escalating risk. Proactive and diligent U.S. involvement is a critical step in developing a long-term solution to combat the presence of pesticides and other chemicals in tea.
However, despite the extensive research, knowledge of toxins in popular brands of tea remains widely unknown to most consumers. While data indicates a clear connection between pesticides in tea and debilitating health problems, the issue is not immune to controversy. Bold news headlines and class-action lawsuits have garnered governmental attention to the issue, forcing the tea industry to respond to claims and conduct further investigation. Some of the examinations have uncovered erroneous test results from third-party researchers, leaving the accuracy of studies difficult to discern.

But the sad reality is that many articles on this subject are limited in scope and skim the surface of a truly complicated, multi-variable issue. After thorough research drawing from primary sources and academic studies, my goal of this investigation was to present accurate facts consistently supported by studies published in reputable academic journals.
In my efforts to provide an extensive investigation, I conducted my own experiment to test the presence of pesticides in additional tea brands. Along with Lipton tea, my results revealed that Gold Peak, Teavana, and Tazo all contained one or more pesticides that exceed 1 mg/L. Compared to the EPA’s standard, the pesticide level found in these teas surpasses the “safe” dose for at least 1/3 of the potential pesticides present in all varieties of teas. While my experiment does not analyze the potential health effects, the data does indicate the presence of high levels of dangerous pesticides that should warrant concern. With mounting evidence surrounding the toxic contamination of tea, utmost caution is advisable when considering even the most popular tea brands.

While it is important to expose the issue, my intent of this article is not to bash tea companies or the hard-working people who grow, export, import, and manufacture bags of tea that make their way to our supermarket shelves. Instead, my hope in this research is to provide a comprehensive overview of the issue and raise awareness of the potentially harmful chemicals that may be hidden in your cup of tea. So whether you are willing to take the risk or not, that’s entirely up to you. But as for me, I’d rather just “spill” that cup of tea.