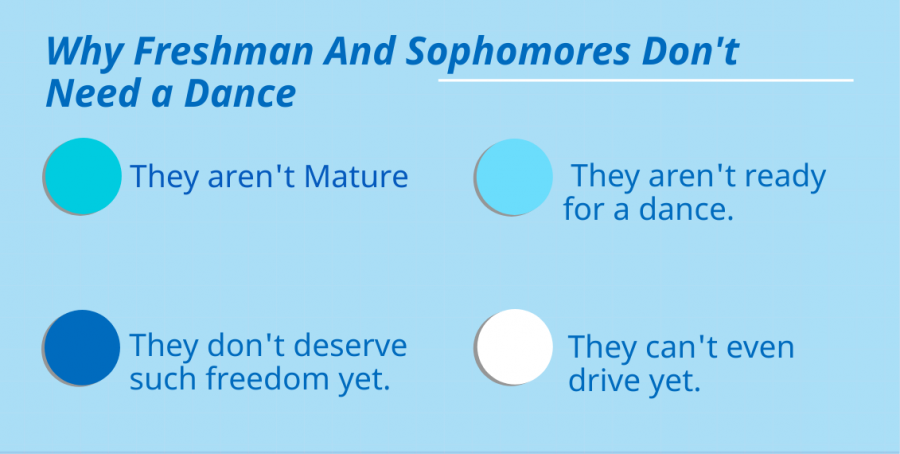 Freshman and Sophomore do not deserve a dance for their immaturity.

Why Freshman and Sophomores aren’t ready for a dance

Every Homecoming Weekend parents put on a homecoming dance for the entire high-school. The dance is one of the biggest events of the first semester, and it is all the freshman and sophomores can talk about. But are we really ready for a Homecoming Dance?

Homecoming dances, even if they are organized and chaperoned by parents, still are not always the best place for kids to be. And that’s what we still are: kids. I know that we are often given and deserve freedoms and liberties, but at a certain point we need restrictions. I’m not saying we are immature, but I do not think that it is the best idea to expose us to situations that are awkward and socially stressful so early.

freshman and sophomores have also shown that they are not yet ready for such responsibility-For example, the trashing of the bathrooms that occurred during the beginning of school. Luckily, such mishaps have not taken place for a while now. But even with this newfound sense of integrity is it really appropriate?

Not only are freshman and sophomores just not mature enough to handle such freedom, they can’t even do certain things that juniors and seniors can. For example, driving and  getting a job. They are basically adults at this point.

Now let me examine the other side’s perspective. The common belief behind people who think we should have a Homecoming Dance for the freshman and sophomores is to “be your kids friend” or “trust your kid”. Both are terrible philosophies that end up getting kids hurt. Why should you trust your kid when they haven’t earned it? Parents and adults are meant to protect us and by doing this and allowing such sodomy occur shows bad parenting.

Don’t get me wrong, I am not saying we as freshmen and sophomores should not have any freedom at all. I think that we have done well with certain freedoms, within the realms of monitored school activities. However, in an environment like school dances where so much could go wrong, I think it isn’t the best idea to allow impressionable young teenagers out into the lion’s den that is school dances.

So I would propose a solution: a dance for Juniors and Seniors only. They are older and mature and they deserve a dance. I think that seniority is valuable and they certainly have it.