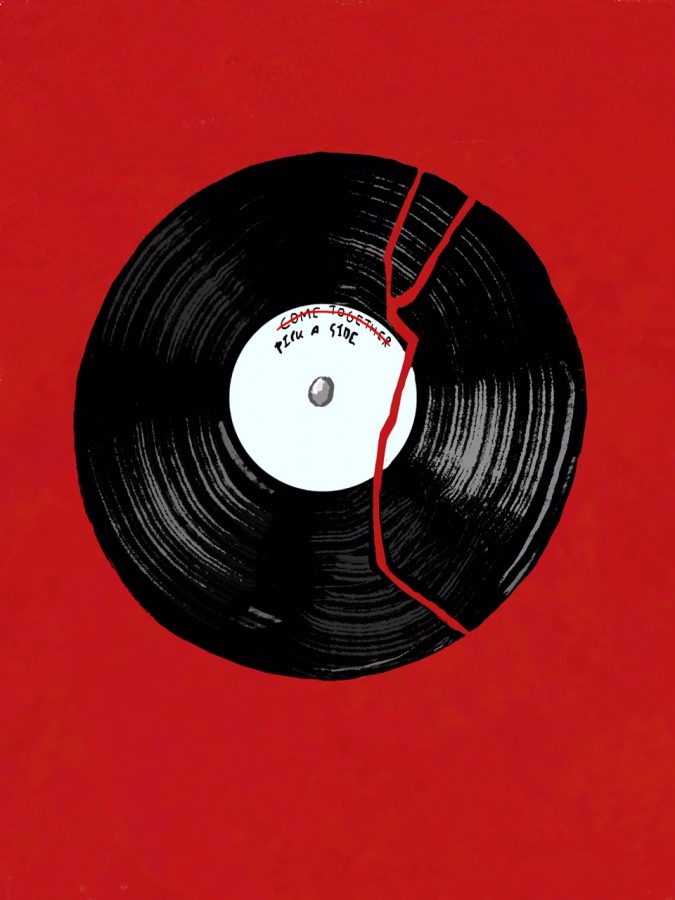 Political divides are stronger than ever and keep on getting stronger, permeating into music.

Keeping Our Composure: What Happens When You Mix Music With Politics?

The Beatles ‘Come Together’ has never been more needed

The world is louder, more tense, and more divided than it’s ever felt before. Politics are slowly taking over, permeating into every situation and inserting itself into every conversation if it goes on for long enough. When politics start leaking into music, something interesting happens- something that has the chance to be great, but often ends up falling short and coming off poorly.

Political music that actually means something, that the musicians are passionate about, can be incredibly powerful. I will never, ever elect to separate all politics from music. For example, the punk musical movement ‘Riot grrrl,’ led by musicians such as Joan Jett and the band Bikini Kill, was an empowering and impactful movement that helped to advance women’s rights- especially in the music industry. It was the first push to let females into the rock genre, a historically and typically male dominated area, and celebrated the idea that women can be strong and influential too. From this period came a multitude of amazing, punchy, social construct and stereotype smashing songs, such as Bikini Kill’s ‘Rebel Girl’ and No Doubt’s ‘Just A Girl’.

There are some instances where being political works. Bands like U2 and Greenday are known for being political, but it’s different for them. They speak up about causes they’re passionate about then they actually practice what they preach. U2 speaks up about issues, then creates or partakes in organizations dedicated to solving said issues. They’re also able to create songs about politics without politics taking over every single song of theirs, reinforcing the idea that they aren’t pushing their opinions on you, but rather inviting you to join them. All of their ideas and beliefs feel genuine. Whether genuine or not, other bands and musicians who create whole albums seemingly out of the blue or bring up politics with every public statement they make almost never come across this way.

While Greenday does come out with almost entire albums focused around a movement or opinion, you know that’s what you’re getting. Almost from the moment they started, Greend

ay made it clear they were there to make a difference. But, when a previously unpolitical band suddenly brings politics up in everything they do, it feels like they’re bandwagoning. It doesn’t feel like they care about it, it feels like they see other people who care and all the attention they receive because of it. It also feels disingenuous when the statements they make are typical, blanket, unfocused ones that don’t point out any particular problem, just a big picture- a big picture we already knew existed.

Blanket statements don’t mean anything. You can’t, as Brandi Carlile’s satirical song ‘Mainstream Kid’ points out, just throw your fist into the air and “declare a social victory.” You have to actually do something. And yes, spreading your ideas is extremely important and sometimes the only thing you actually can do. But people aren’t inclined to believe you or the movement you’re a part of if you don’t seem like you believe it yourself. Are you speaking up because it’s trendy or speaking up because you believe there’s something to speak up about? Do you see people speaking up about someone else’s pain and base your own speeches and declarations off of theirs, thus focused on the movement, or do you actually see someone in pain and speak up for them, focused on the people behind the movement?

If people see ‘efforts’ being made and notice they amount to nothing but more political divide- which they will, as simple statements mean and do nothing- they are going to grow disheartened. Additionally, if you annoy people by bringing up politics all the time and acting like a broken record, or if you try to shove it down their throats, people aren’t going to be receptive. In fact, you might actually be the reason they disagree with you. This detriments not only you, but the whole cause you just stood up for and the people in it, potentially setting the movement back instead of pushing it forwards.

Music has the chance to be journalism, but with more people listening. For ages, it has been a way to protest inequalities and discrimination, a way to rally together and spread information, thus making it so powerful. It has the chance to change the world: this means it can change it for the better, or it can mean it can tear the world apart. Will disingenuous and meaningless political statements be enough to tip us over into chaos? Probably not. But it could easily create an atmosphere of bitterness, a lack of effort, and pessimism. Movements could move backwards, and a matter of human rights becomes controversial. Music brings this world together; we can’t let it start tearing us apart.