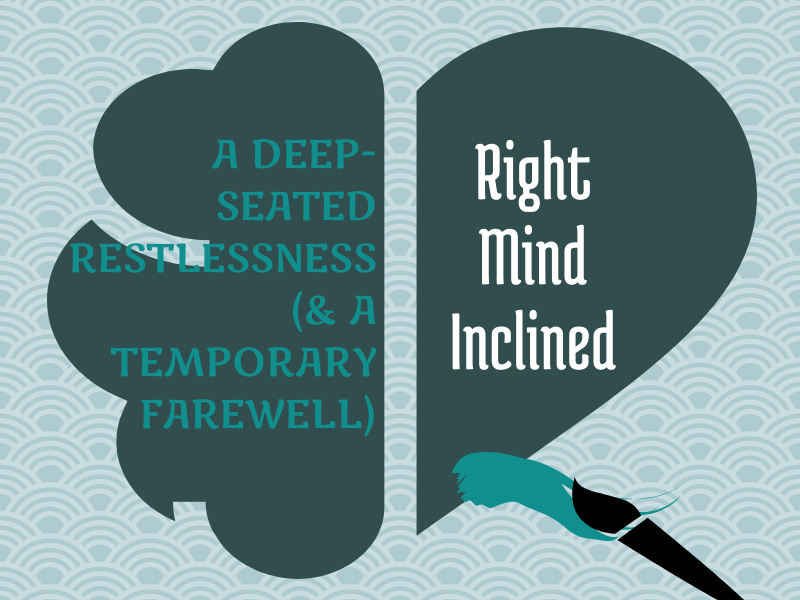 A Deep-Seated Restlessness (& A Temporary Farewell)

I can’t quite place my finger on what it is exactly, but I know something is missing. I know I feel like I don’t really belong, and that there’s often something separating me from my surroundings. I’m always looking for something to feel, something new to analyze and explore, something to dive into and simply sit with for a while.

It’s not a pessimistic sense of something missing, nor is it a bitter discontentedness; I feel content in being discontent and perfectly restful in being constantly restless (I rarely get restless, I just am restless, if that makes sense). It’s all like the U2 song, ‘I Still Haven’t Found What I’m Looking For’ (I would recommend the Rattle and Hum version, if you haven’t heard it before). You could hypothesize that this feeling is a product of youth, and while I recognize this as a possibility, it just doesn’t feel that way. I don’t know why particularly, it’s just a feeling deep down in my gut. But then again, how would I know if I haven’t gone through my youth yet? I also think this feeling is a largely universal experience, something found in varying intensities within most people- the popularity of U2’s song attributes to this.

I’ve debated whether or not this would be a good conclusion to this year’s worth of blogs, if it would put a nice bow on it, but I decided it would actually be fitting to end the series on something that doesn’t quite feel like an end, or at least not a satisfactory one- sometimes a neat bow isn’t the preferable one. I actually typically like open ended, bittersweet endings to books better.

Thank you for reading these, and I hope you made a discovery, were inspired, or found solace in one of them. I will see you at the start of the next school year! Until then, stay creative.