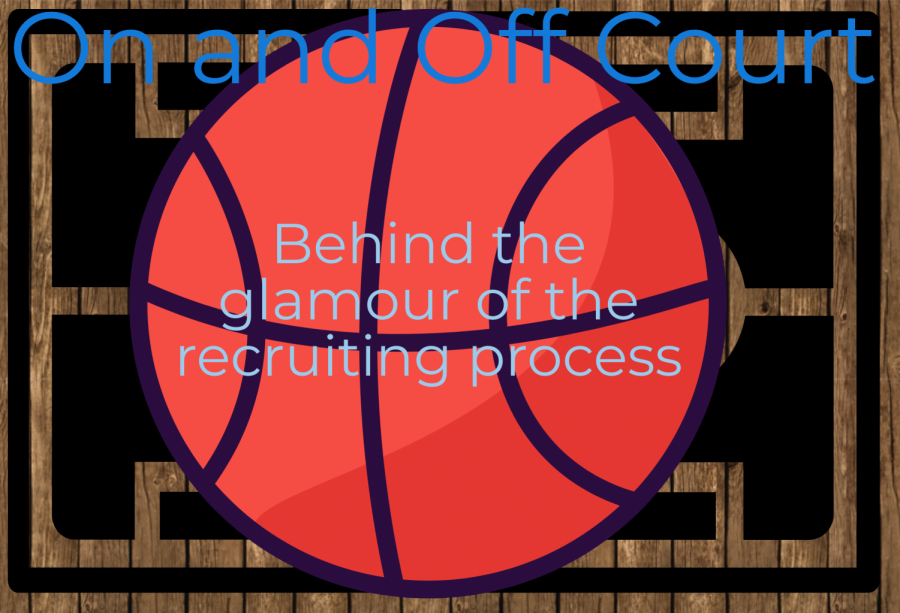 Behind the glamour of the recruiting process

One of the largest misconceptions that I had about basketball growing up was the so-called “glamorous” recruiting process. Don’t get me wrong, I’m very thankful to have been given the opportunity to experience it, but I think it is beneficial to share my personal experience, including all of the expectations that were or were not met, in order to prepare or relate to other high school or collegiate athletes.

Obviously, my story will be geared toward girls basketball players. Even if that does not apply to you, it is still beneficial to receive a different perspective about the recruiting process in order to compare and contrast between various sports and their systems.

Personally, I was first introduced to real college recruitment during my sophomore year of high school. While I loved knowing that scouts were watching me play and that my hard work was starting to pay off, it was somewhat of a hassle to make contact with coaches. For girls basketball, up until September first of your junior year, coaches cannot directly contact you. Therefore, in order to connect with them they would reach out to my AAU coach, high school coach, or my dad and tell them to relay the message over to me, usually involving a time that I should call them.

For obvious reasons, this often became difficult when busy schedules collided. If the coach did not answer when I called, I would have to go through a third party again to ask about a better time to reach out and visa versa.

Luckily, when September first hit, this problem no longer occurred. But, other problems arose in place of it. Because coaches were now allowed to text, email, or call me whenever, it became difficult and sometimes overwhelming to manage them all since it was so new to me. Many players received text messages or phone calls at exactly midnight of September first; it was crazy.

There are two very different types of people when it comes to recruiting; those who love it and those who hate it. I always thought that I would love it because of the attention it would bring, but I was wrong. While it didn’t apply to everybody, I came to dread talking to certain people, especially if it was on a weekly basis.

My shortest call was two minutes, my longest call was close to an hour and a half, and the average conversation would last around thirty to forty minutes. For somebody who doesn’t like phone calls, it grew to feel similar to homework. Several times, I would be at a friends house and would have to go in another room for an hour to talk to an adult who I had never met.

This issue is a lot more common than you would think, and that is why I wanted to bring it up. Every girl that I talked to from the Belmont basketball team, where I will be attending, mentioned that they hated the process, and part of the reason they committed earlier than others is due to that exact fact; they wanted to get it over with. While I relate to this to some extent, my early commitment was more about the complete certainty and excitement that I felt about the school compared to others, and it helped that I didn’t hate talking to their coaches; I even learned to enjoy it a little bit! However, the majority of players prolong the process for as long as possible in order to maximize their exposure and offers and/or remain in the limelight.

On another note, the whole process was a lot more “political” than I originally thought it would be. To help envision this, I once told my dad that I felt like I was dating all of the schools, but I was cheating on all of them simultaneously. As weird as this sounds, it was very true. If a coach asked me to call them at 2:00 but I already had a call scheduled for that time, I had to make up lame excuses as to why I was not available. Or even worse, there was always the chance that a call would go over the expected time and bleeded into a separate one I was supposed to have.

The politics mostly came into play toward the end of the process when schools get antsy and begin pressuring you to commit. Sadly, this is an extremely common occurrence for athletes in the recruiting process. For example, a coach will tell you, before you are fully ready to make a decision, that if you do not commit to them soon, they will give the spot to somebody else and possibly take away your scholarship offer. This puts girls in a very tough situation; you either have to commit without feeling completely comfortable or certain about it, or you probably end up losing your chance with the school altogether.

Although this did not happen to me to that extreme extent, I did feel a good amount of pressure coming from almost every school I talked to, specifically when they would ask me how much more time I needed or what they were lacking in order for me to feel confident.

The last aspect that I want to touch on that I did not expect to be as much of a challenge was the final step of the whole process: telling numerous coaches that I am not committing to their school. This step was the best and the worst part of it all. Right after the best moment, calling the Belmont coach to say I was committing to their school, I had to call about seven other schools that I was considering to tell them the exact opposite.

I had heard “horror” stories from older basketball players about the responses that they received from some of these calls, so I was already extremely nervous to begin with. In reality, it wasn’t as bad as I had expected, but it also wasn’t easy.

First of all, it became rather awkward when the disappointed coaches asked which school I did choose because it felt like I was telling an ex boyfriend who I cheated on them with. Secondly, somewhat showed me how political the whole process really is. Coaches will pour their time and energy into you for countless months to show that they care and want you to play for them, but as soon as that last phone call expires, you never hear from them again.

Specifically, there was a female coach who I had had multiple hour long phone calls and FaceTimes with leading up to my commitment elsewhere, and my final phone call with her was the shortest of them all. After all of the long, deep conversations, a minute long phone call ended it all, and I have never spoken to or heard from her since then. While it is understandable that coaches don’t continue to reach out when you terminate their scholarship offer, it is still an interesting concept to think about when dealing with the integrity of the recruiting process.

Overall, I could go on for hours about the various different aspects of athletic scouting and the task of choosing which school is best for you, but that will be for another time. For now, I hope that I have shed a little bit of light on the reality of the recruiting process, specifically for younger players who are yet to experience it. While I focused mainly on the negatives, there are obviously a lot of positives that come with it; a lot of kids, including myself, have always dreamt about it. Just remember to be prepared for tough conversations, be yourself no matter what, stay true to your wants and needs, and do not let the stigmas of the process blind or intimidate you.