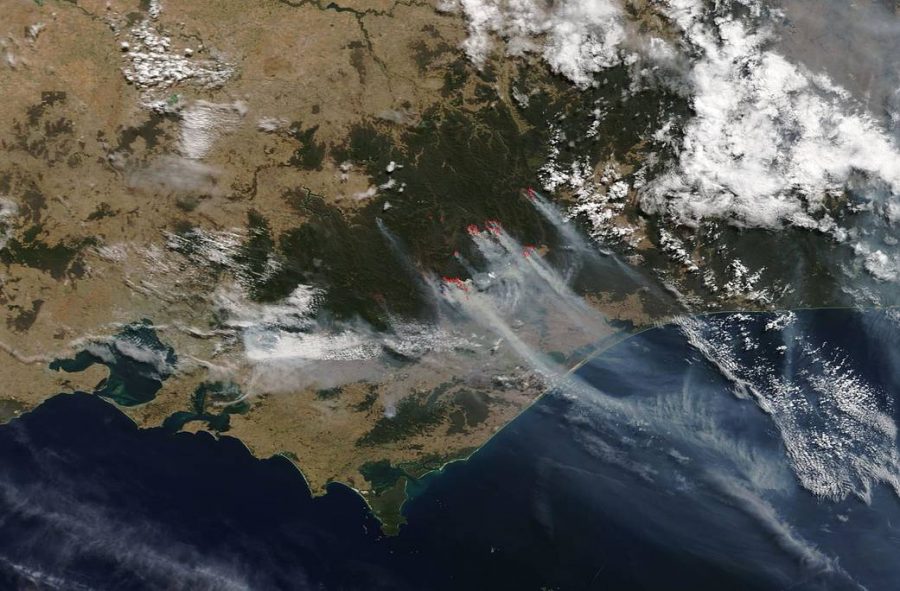 This is a space view of Victoria, Australia showing the moving bushfires as they spread over the continent. Photo by: NASA

Every year the Australian fire season rolls around during their summer caused by the hot, dry weather. This season has always been dangerous, and history shows that large forest fires are not uncommon during this arid time. In 2009, 173 people were killed in a bushfire disaster, and just last Dec., a fire traveled more than 12.4 miles in only five hours.

Many factors contribute to fires in Australia, including lightning and droughts, but this time there is another reason. Over 183 people have been charged with starting or contributing to the fires. They have covered almost 12.1 million acres and has caused 24 deaths so far.

One of the biggest concerns of these wildfires is the destruction of Australian animals and their habitats. It is estimated that around one billion animals have died so far, and scientists are concerned that undiscovered species are being wiped out before they can be discovered. The most well-known Australian animals, including koalas and kangaroos, are not in danger of going extinct because they are spread out across the country, but the population of both is in danger. Wombats are also suffering from these fires.

“It’s just horrendous. A wombat can run 30 kilometers (per hour/18.6 mph), he can run that fast (for) short distances — and then he burns,” said Graeme Jackson, a New South Wales resident who has experience raising orphaned wombats.

Other animals that live in niche environments and have smaller populations may have been wiped out entirely, such as the eastern bristlebird, the mountain pygmy possum, and the corroboree frog.

The biggest issue concerning the animals is the fact that not only are the habitats imperative for wildlife, but the animals are necessary for the habitats. The Australian ecosystem depends on both to support each other. The worry is that even after the fires are stopped, the animals will no longer have a place to live. Or, with the diminishing populations, the original habitat will never be able to recover.

Currently, Australian authorities are doing their best to help the stranded animals by providing veterinary help to those who can recover and using helicopters to drop food to the animals.

This crisis is not only affecting Australia and its wildlife, but it is also affecting America’s people. Three Americans died in a firefighting plane crash in New South Whales. This bushfire is making an impact far beyond the borders of Australia.