“Love your body because you only have one.” 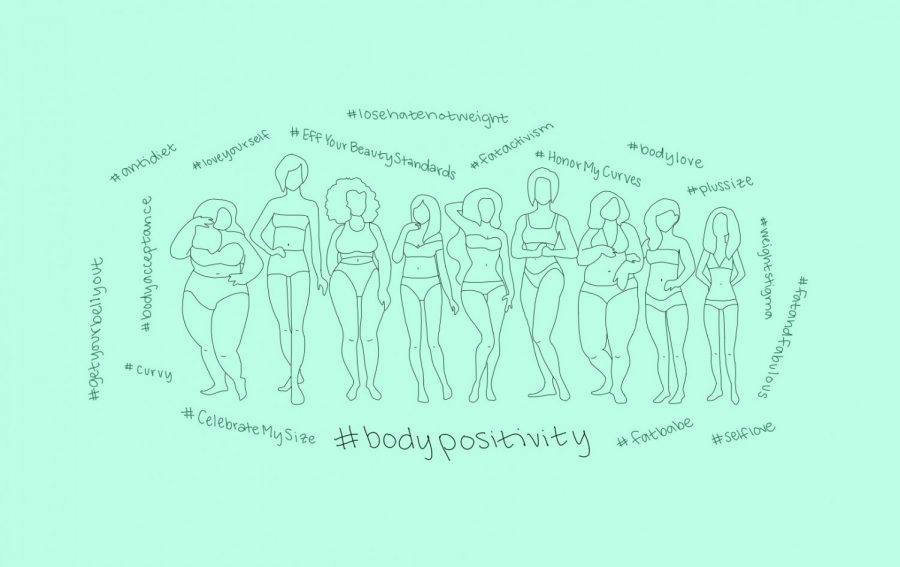 What is the body positive movement?is it really positive or is it harming in some way?

These phrases can be found all over social media, vocalizing the body positivity movement. At first glance, this movement is empowering and full of love and acceptance. It combats the hatred of certain weights, skin colors, heights, complexions, and more. People have been dissatisfied with their bodies far too long, right? However, there are possible concerns that this movement presents. Does the good heart behind these positive ideas overpower the negative effects that should be cautioned against?

According to Carolyn Coker Ross of Psych Central, 80 percent of women are unhappy with their appearance. While the body positivity movement has its roots in the fat acceptance movement, it has begun to morph into the acceptance of all body types, urging people everywhere to love their bodies as they are. The movement is defined as “the assertion that all people deserve to have a positive body image, regardless of how society and popular culture view ideal shape, size, and appearance” by Kendra Cherry from Very Well Mind. Many people are in agreement that this motivation is upstanding and reaps many good outcomes, but there are a few dangerous products as well.

One of these dangers pertains to the health of many individuals who are a part of the movement. According to the National Institutes of Health, obesity and overweight together are the second leading cause of preventable death in the United States, with approximately 300,000 deaths each year. Dangerous obesity can be prevented by talking to a health professional, eating a healthy diet, and exercise, yet the body positivity movement might be deterring people from taking these steps to make themselves healthier. They are told that their bodies are beautiful and perfect just the way they are, which in turn tells them that they do not need to change it.

To go one step further, weight loss for any reason, even trying to become healthier, in the media has been discouraged and receives harsh criticism when displayed due to the body positivity movement. For example, Kelly deVos, author and writer for the New York Times, published a book focusing on a character before and after losing weight, but many claimed that it was wrong to portray someone losing weight. This is because they see weight loss as “never legitimate, because it is an expression of the psychological toll of fat shaming. So any public discussion of personal health or body size constitutes fat shaming”, as deVos said in her article for the New York Times.

Another negative of the movement is the unspoken rules of who can voice the movement and who cannot. While overweight and obese individuals are praised for their courage to fight the beauty norms, conventionally beautiful individuals receive hate when speaking against the same things. For example, Dr Nikki Stamp explains in an article for the Sydney Morning Herald, “Actor and activist Jameela Jamil is an outspoken critic of beauty norms and diets, yet she has received much criticism for daring to have such an opinion because she’s deemed slim, beautiful and extremely privileged.” It seems like if you are conventionally attractive you are not allowed an opinion, but if you do not speak up you are empowering the patriarchy and against the movement. Conventionally attractive individuals are not allowed to feel insecure about themselves.

Overall, the body positivity movement changes many lives for the better, helping them reject their insecurities and love themselves, but health concerns, lack of inclusivity, and hypocrisy should be worked on. No movement is perfect and the body positivity movement has a long way to go, but it’s foundation sits on positive and loving ideas, making it something worth fostering and helping fix it’s flaws.