The Rise in Anxiety Amongst Youth

What is Anxiety and Why is it Targeting Children, Young Adults, and Teens? 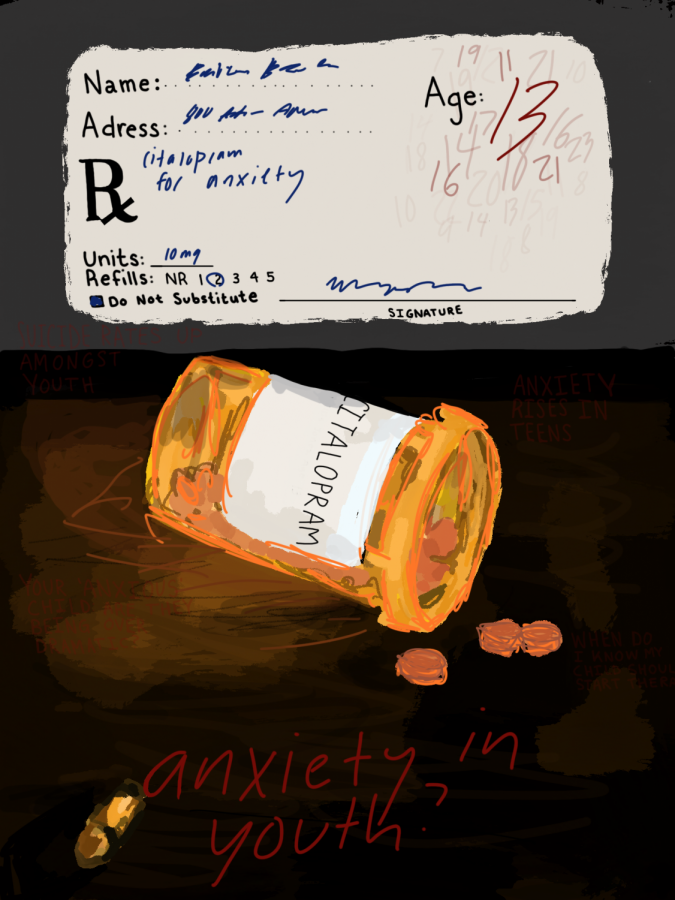 An artistic representation of anxiety medication and the confusion surronding anxiety

An ominous, wrathful creature invades the minds of youth with more tenacity than it ever has before, enveloping them with dark thoughts and setting deep roots into their brains, entrapping the mind with its frenzied claws.

This creature has no plan to stop soon, driving 10.6 out of 100,000 people be- tween the ages of 10 to 24 to such a dark and despairing place that they claimed their own lives in 2017 (“Teen suicides are increasing at an alarming pace, outstripping all other age groups, a new report says,” states The Washington Post). This being, the creature that tortures its victims, is no other than anxiety. But before we delve into the alarming, increasing rates of anxiety amongst people under the age of 24, what is anxiety like?

Anxiety is like this: it follows you every day of your life and every minute of your day, spewing insults and harsh criticism with no recommendation on how to actually fix yourself.

It’s constantly recounting what you’ve done wrong, reminding you that you will inevitably do something wrong again, and constantly warning you of every bad thing that could go wrong, sometimes procuring situations set years into the future. Anxiety doesn’t shut up, it doesn’t stop, and it certainly can’t be cured with a simple “just think of something else!” It doesn’t act rationally, and those who have it are aware of this. You know it doesn’t make sense, but that doesn’t change the fact that it feels very, very real.

Sometimes, anxiety can spiral so out of control it can reach a point where people lose all the remaining control they have over their minds; a person who suffers from anxiety described it as if “my brain is a TV and someone else has a remote.”

You feel helpless if you suffer from anxiety, claustrophobic in your own mind, almost like there are too many alarms going off at once to be able to sort them out. You have no clue what’s going to happen next, and you can feel this in your chest and in your fingers that start to tingle.

“I’ve even had a full-on anxiety-induced panic attack that had me completely convinced I was having a heart attack. It culminated in an ambulance ride to the ER and a tightness in my forearms that caused an intense feeling of pins and needles, which lasted for two hours until I finally calmed down,” says an anxiety-ridden Stever Barry in “4 Illustrations of What Anxiety Really Feels Like.” If you have a phobia, you can try to enter the mindset of someone with anxiety by taking what you feel like at the moment you are confronted with said phobia and think about applying it to your whole life (with varying intensities, of course).

Although some doubt it, the fact that anxiety cases amongst teens and young adults are rising exponentially is indisputable.

“Earlier this year, research presented at the May 2017 Pediatric Academic Societies Meeting in San Francisco found that the number of children and adolescents admitted to children’s hospitals for thoughts of suicide or self-harm more than doubled during the last decade,” states the article “What’s behind the rise in youth suicides?” on CBC News. CBC News also claims that “the rate of young adults with suicidal thoughts, plans, attempts, and deaths by suicide also increased from 7.0 percent in 2009 to 10.3 percent in 2017” in the article “Depression, anxiety, suicide increase in teens and young adults, study finds.” Philip Kendall, director of the Child and Adolescent Anxiety Disorders Clinic at Temple University and practicing psychologist, also said,“There is definitely a rise in the identification of kids with serious anxiety.” The question is why? Why is this happening and how can we help those who are experiencing anxiety?

For the rise in anxiety, there are many given reasons. However, most have not yet been proven. The first of many plausible causes, as adults so willingly declare, is the use of smartphones. And though you may not like it, this theory holds its weight: “Cyberbullying, fear and anxiety of being left out, and sleep deprivation tied to constant smartphone use as factors affecting teens’ mental health and well-being,” says the same article on CBC.

Alternatively, school is also a probable cause, which seems to most commonly be the younger person’s favorite explanation. This too is a reasonable explanation. Business Insider confirms that “Today’s high schools students are taking harder classes and taking more of them than previous generations” in-side the article “High School Kids Today Really Are Working Much Harder Than Earlier Generations.” Colleges are harder to get into, college is now more necessary than ever before, and most students are pushed to get higher grades than the supposed “C” average.

Phillip Kendall also went on to depict the main difference in society now and what it was thirty or something years ago: “We used to have high confidence in our environment- now we have an environment that anticipates catastrophe.” According to him, the atmosphere of society today is a whole different one than it was years ago because people are able to receive news quicker than before (which then reduces the time alloted to process that information), and the world has gone through more tragedies over time. For some reason, this has more of an effect on young people than it does older people.

However, anxiety amongst young adults, teens, and children is most likely not determined by just one factor but rather a combi- nation of things. It could be all three of these theories and a million more we have yet to discover. The problem is that, no matter the cause, anxiety amongst the world’s youth is rising, along with the suicides of those very same people, some not but five years old. It is everyone’s responsibility to stop this, not just people under the age of 24. Children, reach out to your parents for help. Parents, create an environment where your children feel safe to do this and do not write your child’s confession of symptoms off as an attention grab. If your friend reaches out, help them. Ask for help if you need it — it’s okay to ask for help. It’s okay not to be okay. Whatever you do, just don’t give up.

If you are in immediate