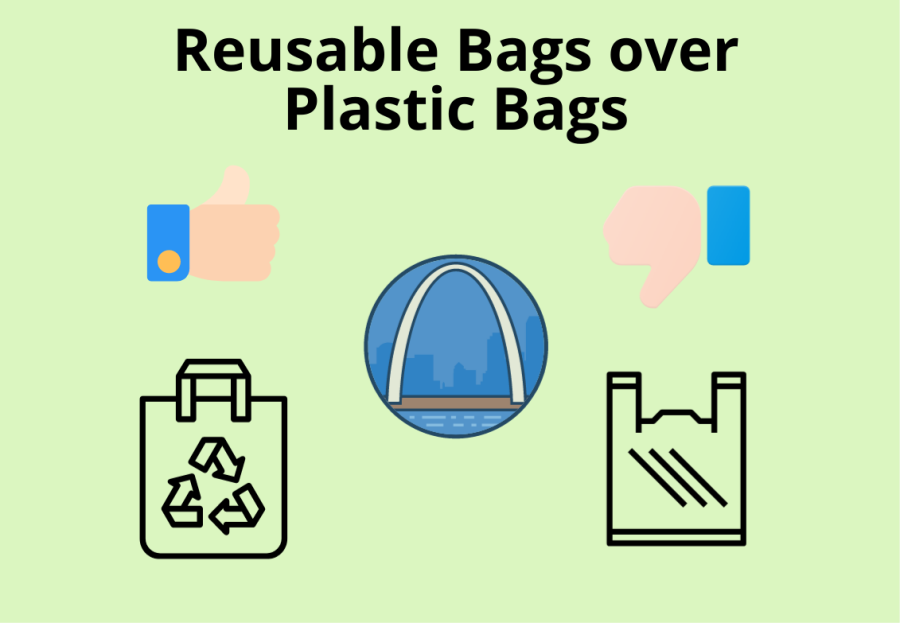 Why St. Louis should use reusable bags over single-use plastic bags.

Single-use plastic bags. They are used in grocery stores, in some takeout restaurants, and many other places. After people take their groceries or takeout food home, they tend to get rid of the plastic bags that they came in by throwing them away. How does this affect the environment and society as a whole? Is there any way that St. Louis specifically can solve the issue regarding plastic bags?

According to Sharon Jacobsen from lacounty.gov, from January to December, “around 500 billion bags are used worldwide.” Jacobsen also adds that “100 billion [bags] are consumed in the United States alone.” That’s a lot of bags! The article continues by talking about how plastic bags affect the pollution in our world.

“Plastic bags are difficult and costly to recycle and most end up on landfill sites where they take around 300 years to photodegrade,” explains Jacobsen. “They break down into tiny toxic particles that contaminate the soil and waterways and enter the food chain when animals accidentally ingest them.”

Jacobsen also explains how since so many plastic bags (along with many other plastic items) enter the ocean, it is really affecting the sea life. “Plastic bags are now amongst the top 12 items of debris most often found along coastlines,” said Jacobsen. “Animals and sea creatures are hurt and killed every day by discarded plastic bags [since] mistaking plastic bags for food is commonplace amongst [them]. Plastic clogs their intestines and leads to slow starvation. Others become entangled in plastic bags and drown.”

So, how can St. Louis, Missouri specifically help out with this plastic bag problem at hand? At the moment, there are many cities and states in the U.S. that are working on solving this issue that St. Louis can learn from and follow.

“As of July 1, 2022, retailers in the State of Delaware no longer provide a plastic carryout bag made from film at checkout. Instead, they now provide customers access to a reusable bag for purchases,” said the people at delaware.gov. They went on to explain how they had been passing laws since 2019 on banning plastic bags to improve the environment.

There is also progress being made in Pennsylvania at a local grocery store called Wegmans according to wgal.com: “Wegmans says in stores where they have already eliminated plastic bags, on average, paper bags are used for 20% to 25% of transactions, while the remaining 75% to 80% use reusable bags, or no bag at all.” Wegmans will be able to get rid of all its plastic bags by September 22, 2022.

By St. Louis following their example, it can also help with the problem of single-use plastic bags.