Don’t Worry Darling, Or Do 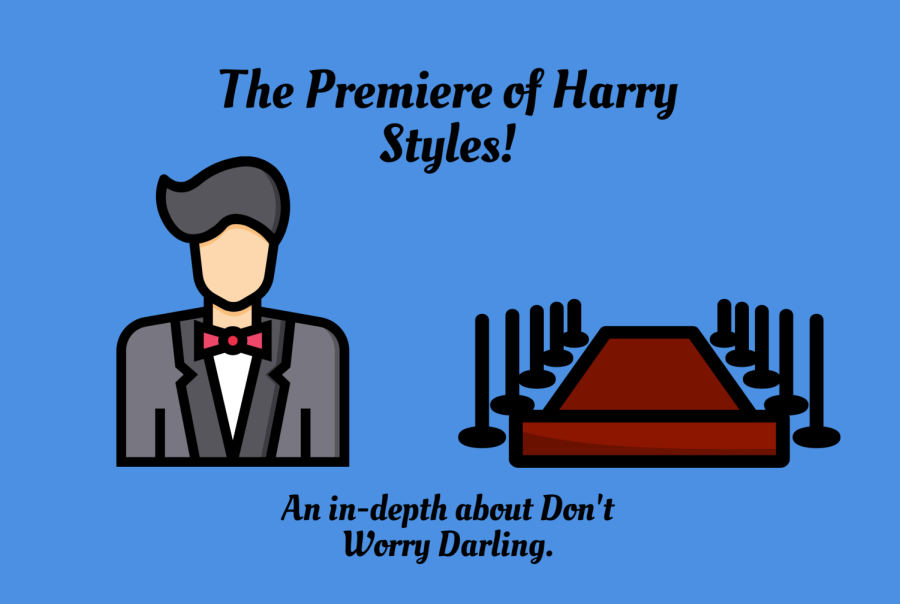 Harry Styles has made his movie debut, but is it all that?

Beloved American popstar Harry Styles branched out of his regular music work and entered the acting world to star in Olivia Wilde’s new movie: Don’t Worry Darling. This physiological thriller covers the story of a 1950s housewife discovering her desired life within a manufactured company town that is far from perfect. Expectations for the movie were set high by the media, and excitement grew as more press was released. With the release date only two days away, the anticipation has vanished, and people have strictly negative comments regarding the film; what happened?

The two main stars of the movie are Florence Pugh and Harry styles. Florence’s co-star was initially planned to be Shia LaBeouf, but Pugh had her concerns. Shia has had multiple scandals regarding harassment and abuse, and she did not feel comfortable working closely with someone with such a reputation. Her problems are more than valid, but Olivia Wilde did not share the same level of anguish as her. After constant fighting to get him cut from production, Shia finally became frustrated early on and decided to quit on his terms. Although, this is where the situation becomes more controversial than it was, to begin with. Director Olivia Wilde claims that she listened to the concerns of Florence and took it upon herself to fire Shia LaBeouf. She claims she decided to release him from the set to have Florence feel “safe.” It’s clear to the media that this is a lie, and there was also a video leaked of Wilde begging him to stay on set.

An article by Jon Blisten from Rolling Stone, released on August 26, 2022, states, “Wilde reportedly sent LaBeouf the video several days after he left Don’t Worry Darling in August 2020. In the clip, Wilde says, “I feel like I’m not ready to give up on this yet, and I too am heartbroken, and I want to figure this out.”

Shia sent this video to Variety News after hearing the claims that Wilde fired him off the safe to protect Florence Pugh. He is angry to listen to these claims when in reality, Olivia begs him to give the film another chance. People grow to spectacle the character of Olivia Wilde due to how she defends Shia. She wanted Pugh to work close and personal with a well-known abuser and decided to lie about how she handled the situation too. The conclusion that Olivia Wilde does not exactly care about the well-being of Florence Pugh but more about what she gains from this project can be drawn. This spirals into Florence Pugh refusing to do press for the film, hurting the production even further.

Now with the actor’s absence from the role of Jack, Wilde is desperate to find a replacement; Harry Styles, her boyfriend, is easy enough. The position of Shia LaBeouf has been filled, and things on set should be running smoothly behind the scenes now, wrong. The close romantic relationship of Styles and Wilde also causes interference behind the scenes. Their relationship was not kept offset like it should have been, which seems to annoy Florence in particular.

Cynthia Robinson from Mercury News shares: “Her relationship with Styles during the shoot was pretty obvious and annoying to the three people I spoke to, and the duo was sometimes tough to find during set-up shots,” Belloni wrote. Co-star Florence Pugh “In particular was angered by the absences, according to these sources, and one source personally witnessed a tense conversation about this issue between the two.”

With the previous scandal involving Olivia Wilde defending the character of Shia LaBeouf and begging him to stay on set, the cast of this movie has been through enough. With more behind-the-scenes drama, the media’s focus is being pulled away from the movie itself. On September 5th, 2022, the movie premiered at the Florence Film Festival, and reviews are said to be a “mixed bag,” according to Molly Edwards from Total Film. The film’s production and execution were seemingly perfect, but critics have their opinions about the movie due to Olivia Wilde’s misconduct and the casting of Harry Styles. Rotten Tomatoes gave the film 42%, and for those who do not know what Rotten Tomatoes is, it is a website that solely rates movies on a scale from 0-100, 100% rotten tomatoes being the best. The film has only premiered at one exclusive festival and already received a 42%, so the future for Don’t Worry Darling is not looking too good. This is unfortunate to see because Harry Style fans were looking forward to this film, but it is already looking to be a big letdown.