Can bills make a boundary?

the education system and the harmful effects of socioeconomic class divide 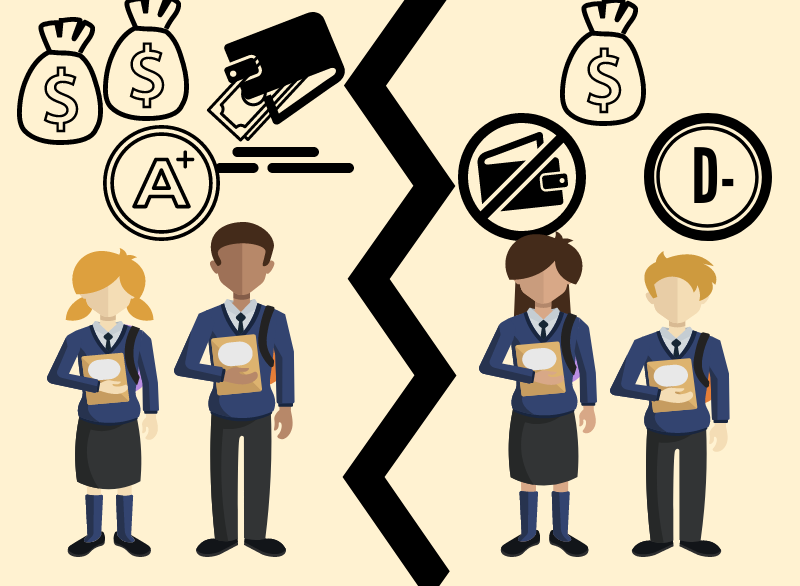 Those enrolled in private schools such as Westminster may not fully experience the effects of socioeconomic class divide outside of spring break location or perhaps a difference in car brand. However, for those completing their education within the confines of the public school system, this divide is substantially more noticeable. In a study conducted by the American Psychological Association, documentation showed that “children from low-SES (socioeconomic status) households and communities develop academic skills slower than children from higher SES groups (Morgan, Farkas, Hillemeier, & Maczuga,  2009)”(APA.org).

Due to the many detrimental effects of living within low income communities, the opportunities that students were granted were noticed to be marginally greater in those of higher SES families. This affects not only the individual student, but the entire community as a whole. The success of each student in accordance with the SES presented in their school district showed to reflect back onto the community depending on what each student achieved. Unfortunately, these opportunities and achievements are ever present within higher SES communities, leading them to greater growth and subsequent wealth while those in low SES communities and school districts struggle with funding to grant their students the same opportunities and advantages mentally and educationally. With the Covid-19 pandemic at its most prevalent in the 2020 school year, this divide transformed from a “minor issue” that was not necessarily an intrusive problem in everyday education to the deciding factor for those that passed or failed during the virtual schooling necessary to complete the 2020 school year held in quarantine. A study conducted by the University of the Philippines revealed that “Historically, new technologies have always benefited those with financial capital, and those who do not will always be left behind. Unfortunately, accessibility is highly related to SES, and this is where the digital divide begins. Children who come from low-SES households develop academic skills slower than those who are from higher SES families (Morgan, Farkas, Hillemeier, & Maczuga, 2009); primarily because poor households have less access to learning materials which promote a positive literacy environment”  learning studies – ERIC US.

Those that were economically unable to access electronic resources to learn were shown to fall behind those who were. As a result, those who did not have access to said technology continued to fall behind, even today as in person schooling has been fully reintroduced into society. This was reinforced by those at the University of the Philippines again, saying: “The problem lies in the larger social problem of digital inequality – only the privileged can continue their education without being compromised (Aldama, 2020). As an example, there is a term coined “homework gap” in the United States which describes the barriers students face in their education when there is no access to a high-speed connection at their homes (Kelly, 2020). This has been a constant problem their country is trying to solve for many years even before COVID-19 and will be more prevalent during the pandemic”   learning studies – ERIC US

While this dividend continues to grow and thousands of students fall behind, there must be a collective awareness as to what is occurring within lower SES communities as well as the opposite end of the spectrum. Obliviousness to one side’s interpretation of the issue will result in no progress whatsoever. However, understanding the issue at hand is only the beginning. Those in higher socioeconomic standings must be willing to acknowledge the privilege that they have in the education system and that it may be effectively taken away from them depending on what kind of change is brought about. This is much of the reason why class divide is still so present today. Thus, if change is ever to be brought about, especially within the education system and socioeconomic status, there must be an encouragement of one another and a desire to support each other on equal standing, no matter what that may mean for the individual.