Why Do We have Separate Homecomings? 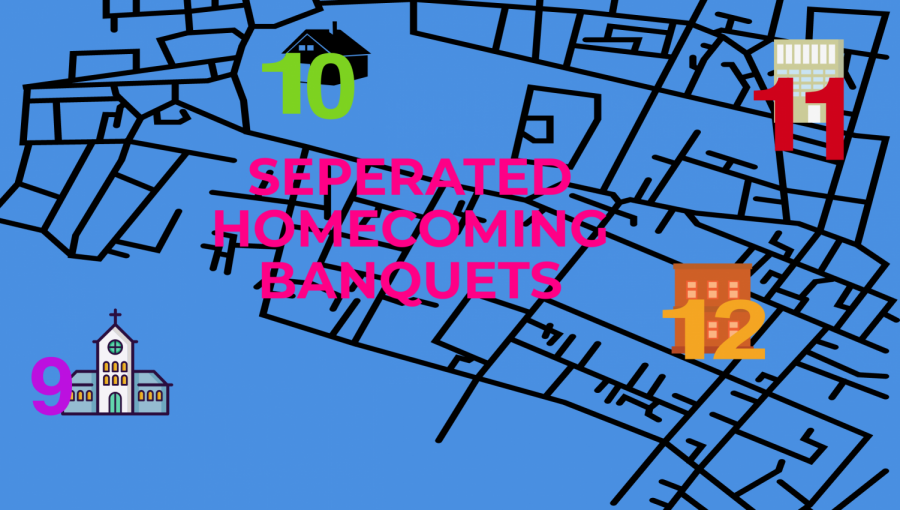 We are all in different places, why? this seems silly.

Well, WCA students, it is that time of the year again. Carnival rides, popcorn, cotton candy, homecoming proposal signs, rejections, school spirit,  dresses, suits, hair and more. Yep! It is almost time for Homecoming weekend. Let’s do a quick recap of the previous years of WCA homecoming dances. The last homecoming that most of us would remember having together was back in 2019 at Frontenac Hotel. This was the first hosted Homecoming that Westminster put together. That homecoming  included all grades, Freshman, Sophomore, Junior and Senior. And boy was that a fun time! We were all able to come together as a whole school community and enjoy dancing, food and more. You were able to get together with students in all different grades and bring a guest! It was people meeting new people and making new memories. Now, I wasn’t going to count how many broken toes there were, or the amount of people who came sick, or the piece of bread that got thrown onto the dance floor and took about 5 people out. But I guess that makes that night a night to remember! Right?

The year after that homecoming there was a worldwide pandemic that none of us saw coming. That following school year there was no carnival ride, popcorn, cotton candy, homecoming proposals signs, there was probably still rejection, but homecoming week did not feel or look the same. Some students said that their parents planned a mini dance for their grade. Although not everyone in their grade was invited. As awkward as it is to not be invited to your own grades’ homecoming, the students who did attend said it was a blast. Eventually the word got out about parents hosting these mini dances for their child’s grade and it spread like a wildfire. And there we have it folks, Westminsters’ new tradition of separate homecomings: hosted by someone’s parents!

Pros? Cons? Anyone? Let’s start positively! Samaria Buford, grade 10 says, “Separate homecoming is a better idea because there aren’t so many people in one place” Which is entirely true! Having one grade per homecoming dance is just easier to organize and not as crowded. Especially with covid around it is a lot better not to have a huge crowd of unvaccinated teenagers. Plus with the parents running the dances that means no boring modest songs! Right!?

So Westminster, why the separate homecomings? Alright there are plenty of cons that I picked up from the student body starting with Christiana Dew, grade 11 who says, “It is not tradition” and a comment from Abbie Canon, grade 12,  “I have friends in other grades”. Looking back over these statements, homecoming has brought up many different perspectives that are very valid and should be considered. It makes sense to separate the grades and allow people to bond with people in their class. Although what about coming together as a whole student body? That is what homecoming is all about, and that is how it should stay. Us fellow students love the traditional homecoming and being able to hang out with friends in other grades. I was able to pick up some more feedback about this new separate homecoming, Joshua K. Anderson, grade 12, brought to attention that, “It’s putting the financial matter on the parents of each individual grade. If there was a homecoming with a higher financial responsibility, it could be spreader out between each grade.” That folks, make perfect sense! Even if the parents do volunteer it is still a big money issue that could easily be divided if we all just had one big homecoming.

I agree with all the comments made about the separate homecomings. They all make sense and could be considered. While some people like the idea of being separated, most people love being together as one for a night. No matter what Westminster decides for the upcoming years about homecoming, I hope you all have a good time no matter what! Make responsible decisions and party hard, wildcats!