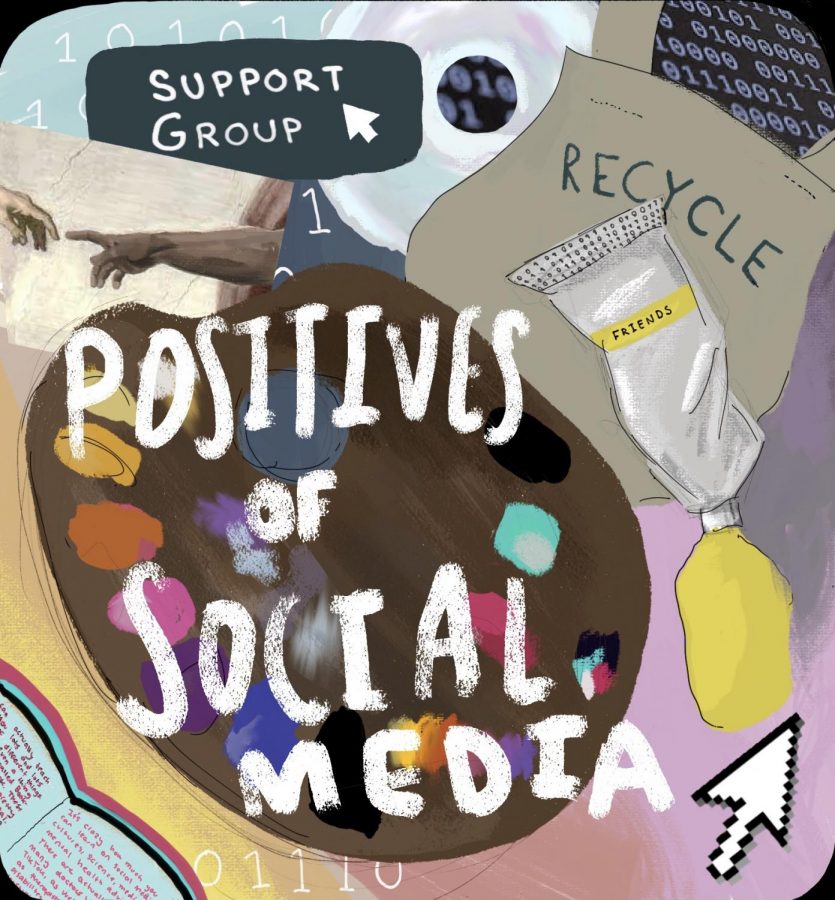 A place where artists can express themselves, where people have a genuine interest in learning, different cultures come together, those with struggles find solace in having people with similar afflictions, passions are explored and shared; Social media certainly has its negative effects on society, effects that are serious and grave- social media could even have a negative impact on society overall. However, social media, like most things, is not all black and white, and it has the chance to be something great, something empowering, impactful, and positive for society. Here are the positives of social media.

Social media can be a space of creativity and endless possibilities, a place that encourages ingenuity and offers an outlet for artistic expression. Instagram and TikTok have a plethora of artists, some beginner and some expert, and Tumblr and Quora have many different spaces where writers can share their poetry, short stories, and likewise. Social media effectively gives creative people a place where they have a voice, a place where they can actually share with the world what they work so tirelessly on. Many artists actually find recognition on Instagram and TikTok too, and even go on to sell their work. Social media also gives musicians a platform as well, one they can share the songs they wrote themselves on- some small, independent or aspiring musicians have gathered an audience purely out of their use of social media. The well known and insanely popular Olivia Rodrigo’s success was largely due to TikTok using her music as sounds. Tate McRae, a young singer-songwriter, started posting her songs on TikTok and soon after released an album and a single in 2021 when her music took off from there. In 2019, according to an article by Music Business Worldwide, seventy different musicians that started on TikTok signed with major labels.

Social media should rarely be used as a reliable or unbiased news source. However, there are plenty of instances where social media can be educational and informative; there are a plethora of art videos containing technical tips, and any art video in of itself is a tutorial. There are also many cooking videos, and there are an abundance more of videos on novels- TikTok even has a subculture referred to as ‘BookTok’. The TikTok user ‘Hood Nature’ makes videos on the animal kingdom, and Tabitha Brown shares her vegan recipes.

Social media is also filled with articulate opinions and historical information (although checking your source’s validity is particularly crucial for this one), another source of information people find through social media they maybe wouldn’t have found otherwise. Many certified doctors- Dr. Kunal Sood, MD, for example– have online presences where they debunk myths and give out advice, as well as licensed therapists- such as Dr. Julie Smith, PhD- who shed light on mental health, destigmatize it, and provide coping methods for thousands of people who can’t afford therapy or are too afraid to speak up for themselves and make that step. Incredibly, all of the education is free.

Along the lines of social media’s ability to provide valuable information, social media can effectively bring together people of different ethnic and cultural backgrounds, educating people who would otherwise be ignorant.

Social media also brings awareness to issues, from environmental destruction and how you can help prevent it to what it’s like for people who struggle with certain illnesses or disabilities. People are empowered to raise their voices for the greater good, touched by the hardship of others and encouraged to speak in a place in which they actually have a chance of being heard. On social media, people can redirect others to donations, protest locations, petitions, and ethically sourced stores.

Not only are illnesses and disabilities destigmatized and brought attention to, but those who personally struggle with these now have a person or even a whole community of people who also share that struggle. There are many support groups online, particularly on Facebook, and being in one- or even just finding one social media page with a person who openly talks about their struggle- can be incredibly healing, informative, and comforting. It’s one thing to have loved ones who care for you, but it’s another thing to have someone that gets it, that understands your pain, who’s lived in it.

People with struggles aren’t the only ones benefited by social media groups. Like-minded people from all paths of life can come together and bond over just about anything, able to freely discuss their passions with those who are genuinely interested in what they have to express. Communities are outlets for a lot of people who love something but don’t have someone who shares a love for it, whether this is the incredibly broad online world of art, or a specific fandom centered around a single novel. Social media fosters communication and communities, whether centered around a shared favorite television series or a mutual love for cuisine.

Social media also allows for friends who don’t see each other often to stay in touch.