Encouraging and responding to student advocacy 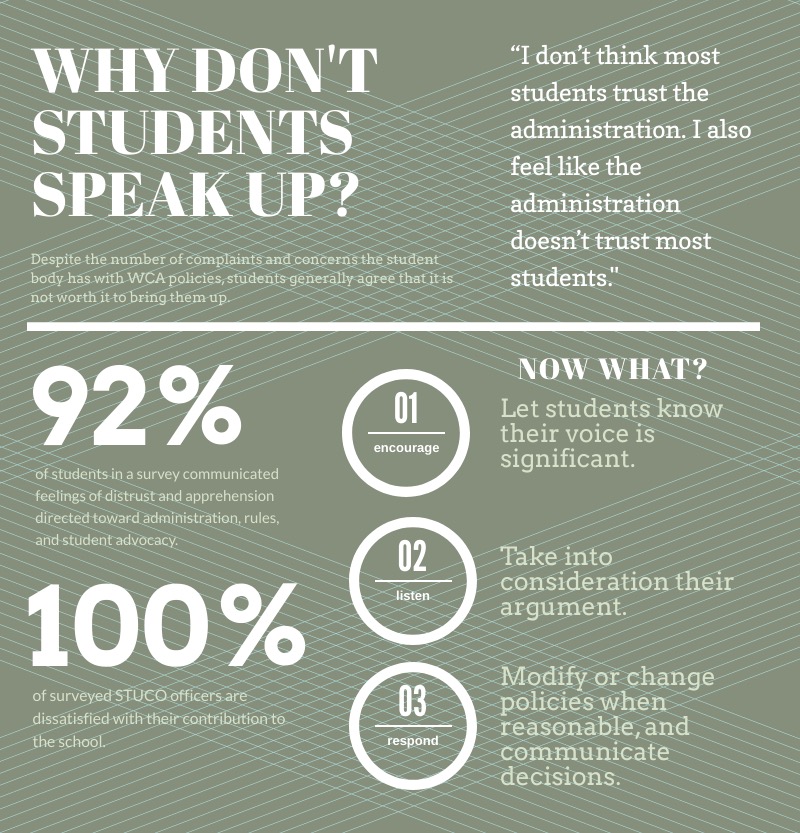 an infographic for the gap btween students and the higher ups

Phone rule, school-sanctioned iPads, dress code, homework, dances: All concerns that prompt students to roll their eyes in annoyance. In the hallways ring complaints about rules, regulations, and general school practices among peers, connoting negativity and distrust with school legislation. Yet in the presence of teachers or admin, we shut our mouths. We forsake the chance to speak up.

The problem does not lie in the rules themselves, however. Our frustration does not target the tangible issues we recognize throughout the school year. The problem is rooted in what happens when such issues arise.

Nothing– nothing happens. Or that’s at least what students say. And that is exactly the point.

I conducted an anonymous survey to hear the opinions of students grades 10-12 regarding student advocacy and the general attitude toward student council, rules, and administration. The overwhelming majority consider bringing their complaints to the table “a waste of time,” claiming that their concerns will continue to be swept under the rug. While they do recognize school-executed efforts to amplify students’ voices, regardless of this, they feel that administration “does not actually attempt to see students’ point of view.” One student wrote, “If I knew I was going to be taken seriously I’d mention issues as they come up, but I really don’t think I am heard.”

Beyond a sense of apathy concerning advocacy, some students additionally acknowledge a sense of fear surrounding the expression of their opinions and how they will be received: a “fear of being disappointed, disregarded, and disrespected.”

So what exactly drives us to allow fear to curb the expression of our opinions and stifle our efforts for change? It permeates the classroom atmosphere and silences our voices. The issue directs attention to the impression of the administration’s disregard for the concerns of the student body. There are two sides of the coin, however, two parties over whom fear has seized control.

Because here’s the catch: behind the scenes, our student council is more than just a “glorified event planner.” Sam Vestal, junior class president, says that “while it may be hard for all of the students to see, I can assure you that there have been many changes made for the benefits of the student body.” An anonymous officer finds “weekly and monthly executive council meetings with Dr. Mosbacker” helpful in opening up communication, as well as school-wide Google form surveys that inform them of general student opinions.

After all, Head of Academics Mr. Gall is both “willing and happy to meet with students and consider their ideas and suggestions,” thoughtfully taking into consideration negative responses to certain policies. And Head of Students Dr. Butler “not only appreciate[s] student advocacy but also think[s] it should be a significant part of what makes WCA what it is.” Nonetheless, she adds that “students are hesitant to speak up because they have experienced not being heard.” Even if intentions are geared towards amplifying students’ voices, that has not yet been made apparent to them. And yet it must be.

So increase communication between students and administrators. Take feedback from STUCO officers seriously, as if their voice weighs more than a negligible opinion. Once students are aware of their influence and involvement in school policies, either in their modification, addition, or removal, it is then that they will feel heard, understood, and trusted by school leaders.

“Building trust and bridging the gap between the student body and the school leadership depends on how we, as administrators, are willing to reflect and take actions instead of just listening,” Dr. Butler believes. For the sake of Westminster as a whole, please emphasize the importance of student advocacy. Our voices are perhaps one of the most important contributions to who we are as a school.