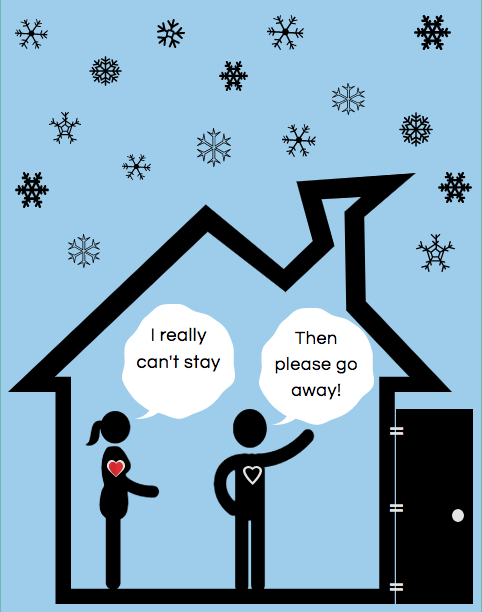 Another look at "Baby it's cold outside"

At Westminster, students have become very familiar with a phrase repeated in each grade: “context is king.” Most often this phrase refers to Scripture and determining what the passage from a book written thousands of years ago meant then and what it means for us today. However, this simple idea can apply to all sorts of misunderstandings due to a lack of looking at the context and situation surrounding an event. In our modern world, we can see this mistake play out everywhere we look. And if you were hoping to turn on the radio and catch your favorite Christmas song “Baby, It’s Cold Outside,” you’re in for a shocking surprise.

After concluding that the lyrics in the original “Baby, It’s Cold Outside” by Frank Loessar were too “sexist” and implied a man taking advantage of a woman, singers and songwriters John Legend and Kelly Clarkson paired up to remake the clas- sic song with new and “improved” lyrics.

Lyrics such as “Say, what’s in this drink?” and “Get over that hold out” have come under fire because in today’s modern age, they are deemed offensive toward women. Because of the anger and complaints radio stations received for playing this song on their stations, it has been removed from virtually all stations in order to keep up with culture’s values.

However, you can still hear the tune on the radio, but with some changes. Legend and Clarkson changed the lyrics in such a drastic way that the comment section of their new music video is filled with people wondering if this song is a joke. Some of these new lyrics include: “My daddy will be pacing the floor (wait, what are you still livin’ home for?)”/ “So, really, I’d better scurry (your driver, his name is Murray).”

And the politically correct version of the song hints at the #METOO movement by saying, “But maybe just a half a drink more (oh, we’re both adults, so who’s keepin’ score)”/ “What will my friends think? (I think they should rejoice)”/ “If I have one more drink? (It’s your body and your choice).”

In fact, some commenters noted that this version of the song sounded more like a desperate girl not catching the hint that the guy is begging her to leave his house already.

The most significant error, though, is that they failed to look at the context surrounding the creation of the original song. When Frank Loessar first wrote the words to this classic Christmas tune in 1944, it was intended for his wife as a song they would sing together at parties.

In fact, Loessar’s daughter, Susan, commented last year about the controversy surrounding the song: “People used to say, ‘What’s in this drink?’ as a joke. You know, ‘This drink is going straight to my head, so what’s in this drink?’ Back then it didn’t mean you drugged me… Absolutely I get it. But I think it would be good if people looked at the song in the context of the time. It was written in 1944.”

Clarkson did admit on her show that “honestly the original doesn’t even offend me, I was just like, ‘Cool, we’ll do another version.’” She and Legend’s new version was created in hopes of making the classic more acceptable with the times, but it has been met with plenty of criticism.

Society should take a deep breath and look at the context surrounding an event before reading into it to the extent of taking offense to everything. So, if you’re looking for some entertainment and a good laugh this Christmas, check out the new, “improved,” and socially acceptable remake of “Baby, It’s Cold Outside.”