Tackle Your Problems: Take a Hike 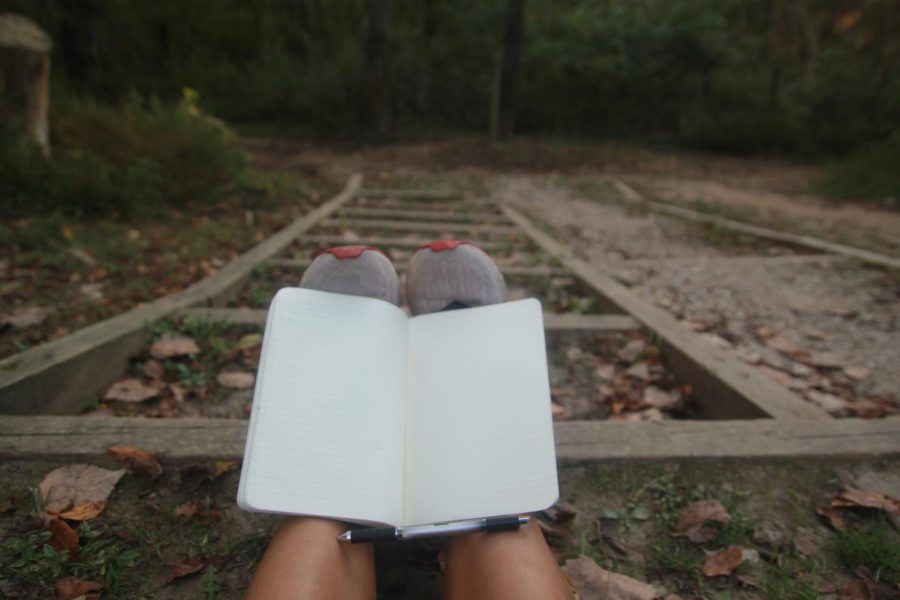 Anxious thoughts about school, sports, and college ricocheted around in my head, transforming my conscious into a pinball machine. After a month and a half of my senior year, I was already more stressed than I thought possible. And as an introvert, my way of processing it is to internalize, which then allows no room for anything else.

So, I packed up my journal, pen, and water bottle and drove to Castlewood park, which is a convenient 2.0 miles from my house. With the original intent to hit the trails for about an hour, I hiked for two and a half hours, reveling in the burn of my legs and shortness of breath, while also losing myself in the beauty of the leaf-laden paths and soft filtering of sunlight through the trees. Then, I was ready to pen it out. My thoughts moved easily and smoothly from my mind to my pen, and finally, to my journal pages. After 45 minutes, the crux of my conflict had been revealed, and my mind was opened up, with more headspace to think of solutions moving forward.

While not everybody may be interested in being outside, exercising, and journaling, even doing just one of these things can have exceptional mental health benefits, especially compared to other commonly-sought out alternatives.

First, to explore the positive effects of exercise, researchers Felipe Barreto Schuch and Brendon Stubbs, from King’s College of Cambridge University in London, were featured in Outside magazine for their studies in exercise’s role in mental health.

For their research, they reviewed “25 studies that surveyed a total of 1,487 people and found that between 40 and 50 percent of people with depression respond to exercise, with an effect that, on a scale of small, medium, or large, is considered large.”

This is “large” because it could be comparable to medication and therapy used for depression, particularly because while the “dropout rate” for therapy and medicine is 26 to 28 percent, while it is only 18 to 19 percent for exercise. These two types of supporters of mental health are not independent from one another, though depending on the person, they can be used together for even more depression improvement.

Schuch and Stubbs tentatively believe these positive effects of exercise could be due to exercise’s ability to provide a confidence boost, anti-inflammatory effects, and growth of BDNF, which promotes neurological growth and formation of patterns and a routine. These contend the lower confidence, inflammatory effects, and lower levels of BDNF associated with depression.

But exercise is not the only helpful remedy – nature has been shown to be conducive to mental health, as well. In a research study titled “The benefits of nature experience: Improved affect and cognition,” Gregory N. Bratman, Gretchen C. Daily, Benjamin J. Levy, and James J. Gross studied the effects of nature on anxiety, depression, and cognition.

In their study, they studied sixty participants who had been randomly assigned to walk around for 50 minutes in either an urban or natural setting in Stanford, California. Before and after the study, they took several cognitive assessments of the participants, and found, after the second set of assessments, that  “compared to the urban walk, the nature walk resulted in affective benefits (decreased anxiety, rumination, and negative affect, and preservation of positive affect) as well as cognitive benefits (increased working memory performance).”

While this study, like the one performed by Schuch and Stubbs, is only a stepping stone in the path to discovering the plethora of benefits behind being in nature, it is, according to the scientists who conducted this study, helpful to “further [their] understanding of the influence of relatively brief nature experiences on affect and cognition, and help to lay the foundation for future research on the mechanisms underlying these effects.”

And finally, perhaps even more accessible than exercise and nature, is journaling. The University of Rochester Medical Center, with input from health professionals Renee Watson, MSN RN, Marianne Fraser, MSN RN, and Paul Ballas, MD, claim that “keeping a journal can help one manage anxiety, reduce stress, and cope with depression by helping [to] prioritize problems, fears, and concerns, tracking any symptoms day-to-day [to help] learn ways to… better control them, and providing an opportunity for… identifying negative thoughts and behaviors.”

Journaling, like exercise and nature, is certainly a viable way to clarify and enhance the state of one’s headspace. And, unlike typical teenage methods of coping with stress such as partying, binging television shows, or other questionable activities, these fab three are natural and (essentially) free of cost, making them greatly attainable. So what are you waiting for? Lace up your shoes, get a journal, and take a hike.