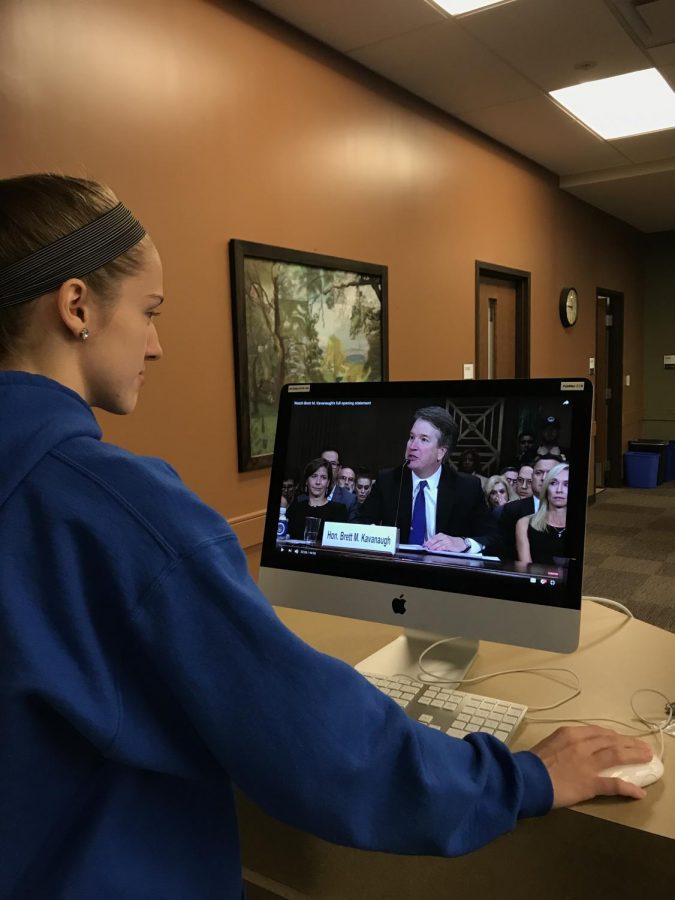 In the afternoon of August 27, a hearing was held for Judge Brett Kavanaugh in his alleged sexual harassment of Dr. Christine Ford. Dr. Ford leaked the details of the high school harassment only days before the Senate Judiciary Committee was to vote on Kavanaugh’s spot in the Supreme Court.

At Westminster, students have their own opinions on the timing of Ford’s confession, the appropriateness of holding a trial for an act as a minor in order to be a supreme court judge, and how the morals of a high schooler translate into being a supreme court judge.
Ford’s confession was surprisingly timely to the decision for Kavanaugh to be judge.

“I think that the timing of the leakage is very crucial,” said Justin Fuller, junior. “While the case could be made that Dr. Ford is using [her confession] as a means to smear a politician with differing beliefs, the case could also be made that this is an attack on Washington corruption.”

Besides the alternative motives, there is the fact that Ford vaguely mentioned the alleged harassment to her therapist.
“I absolutely believe that the confession was timed on purpose, but if she had told her therapist six years ago, she could have had the situation dealt with long before Kavanaugh was held in intensive hearings for a highly respected position,” said Allison Hardin, junior.
Nonetheless, the trial was held, with mixed reactions following it.

“I believe Kavanaugh deserved a trial for nothing else than to defend his name. As a man who has worked tirelessly to reach the position he is in, and if he is found innocent in the FBI investigation, then he does not deserve to have this cloud hanging over him,” said Fuller.
The other school of thought examines if Kavanaugh was actually lying in the trial, save the questionable action of harassing Dr. Ford itself, and if this legitimizes him from being a supreme court judge.

“I believe he can still be fit for the position, even if he did do what Dr. Ford said. Since the event was so long ago, he may have changed completely and have had remorse for the situation, assuming it was true. However, if he is lying, I don’t believe he would be fit, as it would be perjury,” said Hardin.
However, the overarching question of the trial and investigation still looms: how much do morals as a high schooler translate into being in supreme court today? In other words, should Kavanaugh be tried for something he did as an irresponsible teenager, with decades of judicial work and a respectable family following?

“To me, what we do in high school will lay the foundation for our future. It is our choice then to ensure that what we do now will not only be to our benefit now, but in our days to come,” said Fuller.
Similar to Fuller, Hardin adds, “Many people do not think the decisions they make in high school matter. In reality, though, something like this can come up in the future and threaten everything- their career, spouse, children, etc. As sad as it is, a huge or small mistake can blow out of proportion, especially for someone in the national spotlight.”

Despite their slightly different views, these students at Westminster agree that Kavanaugh’s honesty in his confessions is paramount. If he is not honest, then he is not fit to be the highest form of judge for moral issues, some similar to the one he himself is being tried for. It is also a lesson to live as cleanly and honorably as possible for when the opportunity to take a position such as this comes along.