Shortly after St. Louis County executive Sam Page comes out with month-long restrictions, some restaurants have had enough and are beginning to protest while staying open. 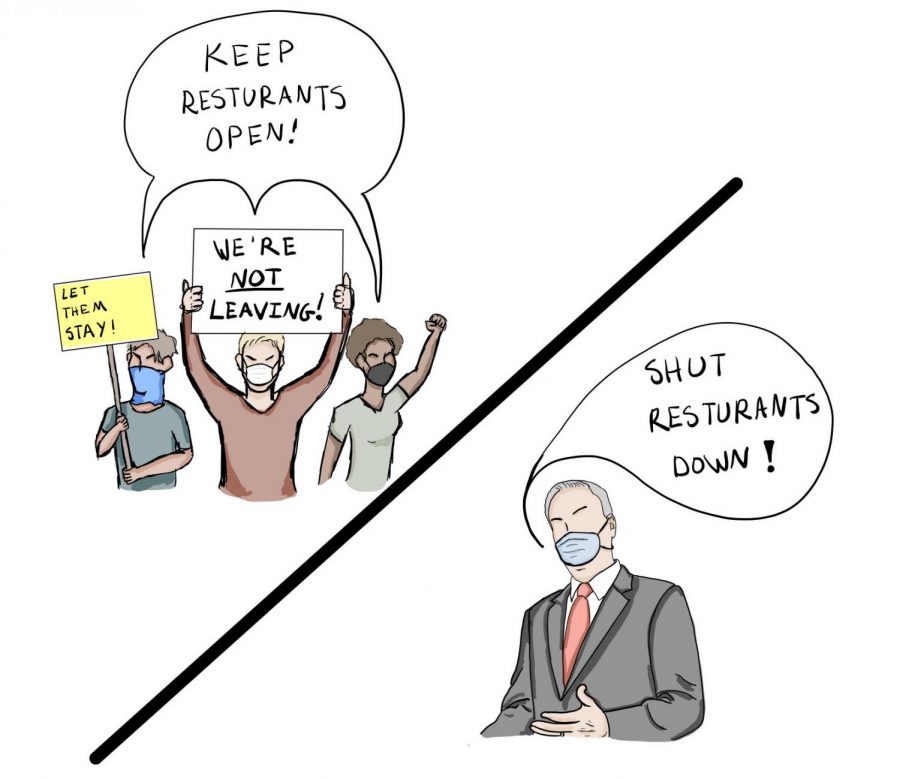 Friday, November 13th, Sam Page made a public announcement stating that all St. Louis County restaurants are being mandated to close their dining rooms for the next 4 weeks. He did not even say that the dining rooms would re-open in 4 weeks, but the situation would be “revisited.” Which leads to speculation that the closure will last much longer than a month. This only applies to indoor dining, however, all patios can remain open while serving at 25% capacity only, decreasing from a previous capacity of 50%. Other facilities such as gyms, churches and non-essential businesses are only allowed at 25% capacity as well.

Closing dining rooms again may not be an option for some businesses, where most of their money is generated through dining-in. Some businesses cannot survive solely on carryout, and eating outside when it is 20 below is not an option either. Nobody wins in this case. Many think Sam Page is killing all of St. Louis County businesses with all of his unnecessary restrictions.

Some restaurants are not only furious, but are completely standing their ground and staying open amid Page’s mandate. Bartolino’s South, a St. Louis County italian restaurant located on Lindbergh Boulevard, is one of those on this list. John Saracino, president of Bartolino’s, had an interview with the St. Louis Post-Dispatch about his views and his continuation of always being there for his loyal customers.

“Sam Page’s overreach with the arbitrary closure of indoor dining for county restaurants and bars is irresponsible. The final weeks of the year are consistently one of the most important times of the year for restaurant employees. Our employees are family, and Sam Page took a direct uppercut towards their livelihood,” said Saracino.

For many eating establishments, November and December, which is the holiday season, collects the bulk of the year’s finances. Most restaurants are not able to survive being closed a month during the busiest time of the year. On top of that, with the way Page worded his speech, there is no guarantee that those establishments will re-open in a month’s time. The unknown of what will come is just unbearable for restaurant owners all across St. Louis County.

Restaurants like Bartolino’s, who are remaining open, have threatened to file a lawsuit against Page and his new restrictions. According to St. Louis Magazine, more than 40 restaurants along with the Missouri Restaurant Association, have planned to file a lawsuit in order to stay open and continue to serve their customers through the holiday season. Page obviously takes no consideration and has no compassion for employees who will be out of a job after his announcement, while he’s receiving his full salary for being county executive

All surrounding counties such as Jefferson, St. Charles, and the city, are not under the same restrictions. In these counties, restaurants are able to remain operating under their usual 50% capacity. What Page obviously did not think through was the fact that people in St. Louis County who want to eat out will go to these bordering counties to dine-in, making them more crowded, which defeats Page’s purpose in the first place. It is completely understood if people do not want to put themselves in positions to receive the virus if they are at high-risk, but it is not Page’s job to dictate people’s personal decision to dine-in at a restaurant, that decision should be made by each individual themselves.

Along with the devastation that there will be no income for many restaurant employees, there are also no extra options for unemployment as there were during the spring shutdown. This leaves many people stranded during the holiday season, which should be one of the happiest times of the year, but for some the saddest in the year of 2020. However, to those restaurants who have had enough and are taking a stand, more power to you!