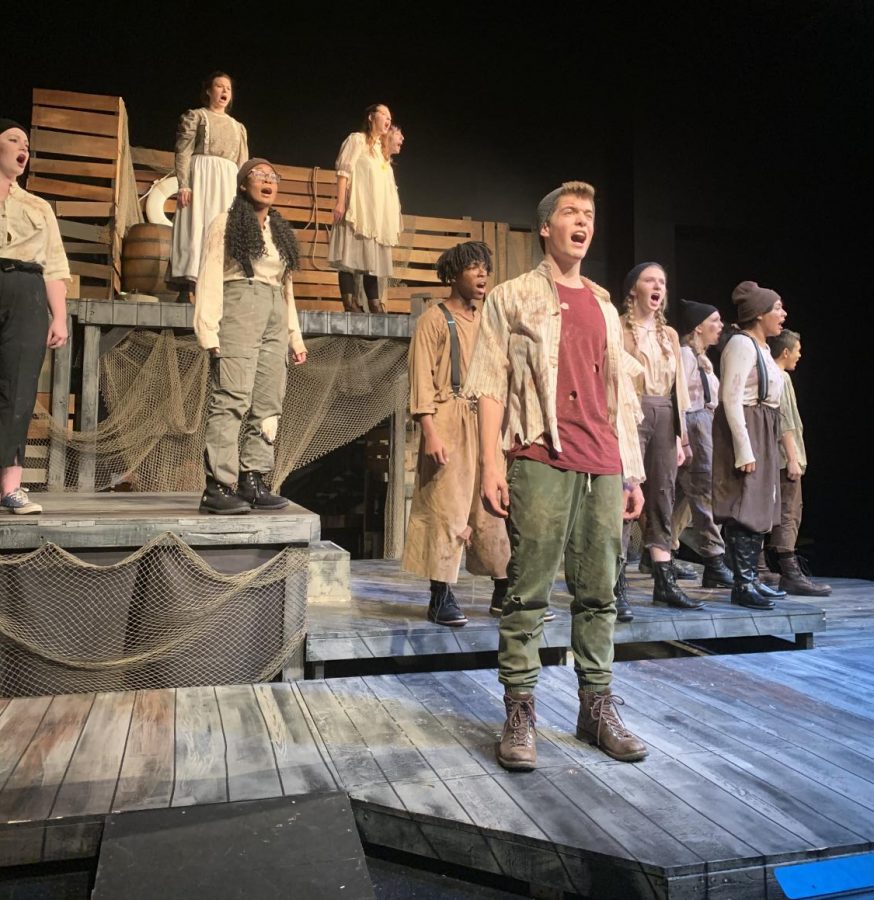 The cast stands on the stage and sings a song during the first scene of the show.

From Thursday, Oct. 17, to Saturday, Oct. 19, the theatre program performed Peter and the Starcatcher at 7:00 pm in the Blackbox Theatre, as well as a 2:00 p.m. matinee show on Saturday. Peter and the Starcatcher is an engaging story about the origins of Peter Pan, Tinker Bell, and the Lost Boys. The play is full of ups and downs that have the crowd crying one minute and laughing the next.

Peter and the Starcatcher is a production that uses a wide range of props, outfits, and creative sounds to make the play come alive. The play is also quite immersive, including several scenes where the actors actually went into the audience and made it feel as if the people watching were a part of the play.

“It was one of the best shows I’ve ever been apart of because it was so interactive with the audience,” said Michael Lee, senior, who played Peter.

One of the best parts of going to productions such as Peter and the Starcatcher is seeing classmates and friends in character. Ella Polski, senior, played Molly, a young headstrong girl who is one of the main characters in the play. Polski played her part so well it was hard to find where she began and her character ended.

“I love my character because she perfectly exemplifies a 13-year-old girl who is trying to find her identity. She was so fun to play, and the show itself was so fun,” said Polski.

This play was also some of the cast members’ the first time on stage. This is a brave feat since it takes immense courage to get up in front of the school and perform with such few mistakes. Ethan Rush, senior, played Molly’s father in the play and looked like he had been on stage his whole life.

“Because it was my first play I was a little nervous, but it has been a great experience, and the cast has been really supportive,” said Rush.

Peter and the Starcatcher is different than any play that has been seen at Westminster previously. The energy and the emotion the cast used created an atmosphere of awe in the crowd that is very hard to achieve. Every cast member was extremely devoted to his or her part, and this commitment could be clearly seen by their performances on stage.

“I chose this play because I wanted something very ensemble driven and something new that Westminster hasn’t seen the past few years. I’m drawn to the writing and the fact that it has the entire spectrum of human emotion, embodying a comedic degree while also incorporating very somber moments. I remember seeing it on Broadway, and it was one of the best theatrical productions I’ve ever seen, and I wanted to try it with my students,” said Jim Butz, drama teacher and director of Peter and the Starcatcher.