Cheerleaders and Football Players Perform Together at Homecoming Pep Assembly

The Wildcats Two-Step Into Homecoming 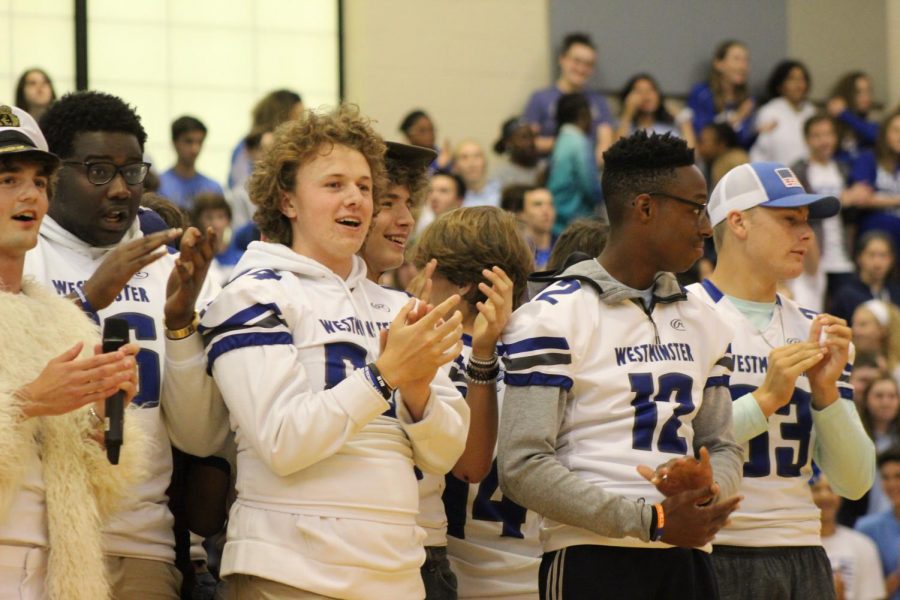 Varsity football players and cheerleaders perform a dance together at the Homecoming pep assembly.

On Thursday Oct. 3, the Westminster cheerleaders, varsity dance team, and a group of varsity football players performed “The Git Up” in front of the entire school during the Homecoming assembly. Because of the multiple-team senior recognition the following Saturday, the cheerleaders wanted to collaborate with both the dance team and the football players. They decided to do a dance together and found one that everyone would know. The famous TikTok dance, “The Git Up” is known by kids at every age, and the captains chose this because of its popularity and for how short it was.

The dance involves country style dance moves, including the boys spinning and dipping the girls. It also incorporates modern-day hip hop moves, some of which we’ve seen previously from our varsity dance team.

“We thought it would be easier to teach the football players a shorter dance that they were already familiar with instead of a longer routine,” said Maggie Ellis, senior cheer captain.

Originally, only the seniors from each specific team were planning to perform but with uneven numbers, the captains decided to pull up a few underclassmen from the cheer and dance teams to help out. This turned into having all members of Westminster’s cheerleaders and varsity dance participating in the performance, and some of the younger football players even stepped up to provide partners.

Out of the three teams, the football team was the least experienced in the dancing and performing area. With many other dances under their belt, the biggest challenge for both the cheerleaders and dance team was teaching the boys. They spent only one day teaching the dance, as well as the first two Mondays before the performance practicing in the Arena.

“I was really proud of the way it turned out. It was kind of a last minute thing that we hoped we would be able to do, but with the hard work and flexibility of everyone involved, we pulled it together and it was really fun,” said Lauren Bohlmann, senior dance captain.

Ellis’ partner Toby Davidson, senior long snapper and middle linebacker, was a little intimidated by the idea at first.

“Being in the front and in the middle was definitely not what I was expecting, but I ended up having a lot of fun, and I’m really glad we did it,” said Davidson.
With only three practices, the teams presented the dance in front of the school during the assembly led by seniors Sabrina Granata and Justin Fuller.

“It was so fun to watch all of them,” said Granata. “I am friends with a lot of the people who performed so it was really great to see them together.”