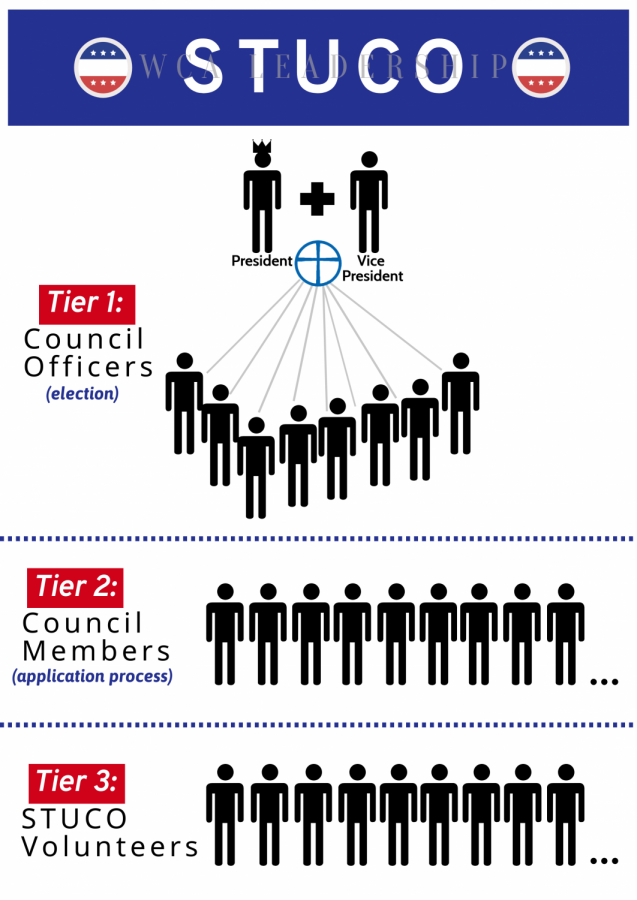 STUCO looks to be a new and innovative approcah to student leadership at WCA.

There are few things that high school students hate more than change. Whether it be the walls in the hallway being painted a slightly different shade of beige or even worse, classes being 51 minutes long instead of 50 minutes (and for those students who are currently freaking out a little bit after reading this, don’t worry those were just examples). But the point is, change can be difficult even if it is for the better. Those in charge of Student Council (STUCO) understand this and they want the community to understand their heart behind it so it can have the greatest impact possible.

First of all, it is important to clarify what the Student Council will actually look like. The program will consist of three tiers, so to speak. The highest tier will be the Council Officers who will go through an application process and then will be voted on by the students in their grade. There will be 10 council members per grade with positions including President, Vice President Secretary, Sergeant of Arms, Treasurer, Director of Records, Public Relations Officer, Service Director, Social Director, and Spirit Director. There will be a separate election for Class Presidents but the other positions will be determined internally by the Student Council Members.

The third tier is the STUCO volunteers. Volunteers do not have to apply and their job is to assist STUCO with different school events such as Carnival, Christmas Banquet, etc. These different roles were created in order to allow students to contribute in a way that makes the best use of their time and talents. One of the main pillars of STUCO is that it was created for students so that they can grow in their leadership skills and have a voice in their community.

“I think one of the big things is for a long time now we’ve never really had a place for kids to have a voice, a seat at the table, to discuss things that are going on, to express opinions, ideas, and changes. You guys make up the majority of our community, so it would be nice for there to be a place for [students] to practice leadership skills and be able to not just learn about leadership skills but really having to live it out and see behind the curtains, so to speak,” explains Ashley Woodall, Assistant Director of Student Life.

Also, student council was created out of a desire for students to be able to grow and have opportunities to become real leaders which the current system does not allow for as there simply is not enough time.
“Currently you have about 30 minutes a week [during advisory] and you are supposed to do big things. The problem with that is that the adults have to do a lot of work behind the scenes, and it takes a lot of ownership away from you guys. There is just not as much time to grow, there is not enough time to just sit and reflect,” continues Woodall.
By creating time for more reflection, students will also be able to grow in their relationship with Christ and further the school’s mission

“We wanted to give students an opportunity to engage the world and change it for Jesus Christ, which is in our mission statement, and in order to do that within the confines of student leadership, we need to have more time,” said Susie Brown, Director of Student Life.
Finally, STUCO hopes to build a better relationship between administration and students at Westminster so that a better understanding can be reached and perhaps students and adults can learn from each other.

“Another motivation is that hopefully, this will improve the relationship between adults and students because you’ll be intentionally hearing each other’s opinions and perspectives and building a better trust,” said Woodall.
Members of the student life team have devoted a lot of time into making STUCO something that will benefit the Westminster community, and they hope that students will be apart of making it better throughout the years.

“There was tons of research and Mr. Muehleisen and I went and visited Lindbergh High School which is known for having one of the better STUCOs around. We have tried to learn from people who have walked through it themselves but also trying to consider that Westminster is a unique school and so trying to take what has worked in a lot of schools and tweak it so that it works best in our current school. This is going to be a very organic entity that a lot of different people speak into, and there will be changes every year hopefully for the better. This structure is not set in stone -it is what we are starting with- but I know it is going to change and students will be apart of that change,” continues Woodall.
However, while the right motivations and preparation are in place, school administrators recognize that this is a big change for students and are working to do everything they can to make the transition as easy as possible and facilitate cooperation.

“Please give the adults the benefit of the doubt because this is all for students and not for us. In our culture, we have an ‘us versus them’ mentality and it’s wrong. It’s not ‘us versus you’ we need each other and when we’re working together and we see each other as brothers and sisters in Christ and focus on working together imagine the possibilities” said Woodall.
Another change that affects the rising seniors is that the Council Officers from the senior class will not participate in senior service as the meetings will take place on Thursday mornings.

“This will be hardest for [rising juniors] because you have lived five years of the way it was, but your senior year we are throwing a big change at you, and I think some of you will not want to give up your senior service because that is something that you have been thinking of for a while. I think those 10 seniors will have to sacrifice, but it will worth it,” explains Woodall speaking to current juniors.
Overall, while this is a big change, STUCO is designed for students and its success will be determined by students. If students support this change and work to make the program better through their specific gifts and talents then it can be something that honors God and better the community.

“God has created really cool people designed everyone with specific gifts so the idea that we could all come together and contribute to something greater than ourselves is pretty exciting and if people could buy into that and be willing to be contributors rather than consumers then that would be pretty fun place to go to school” concludes Woodall.