“The fishermen know that the sea is dangerous and the storm terrible, but they have never found these dangers sufficient reason for remaining ashore.” 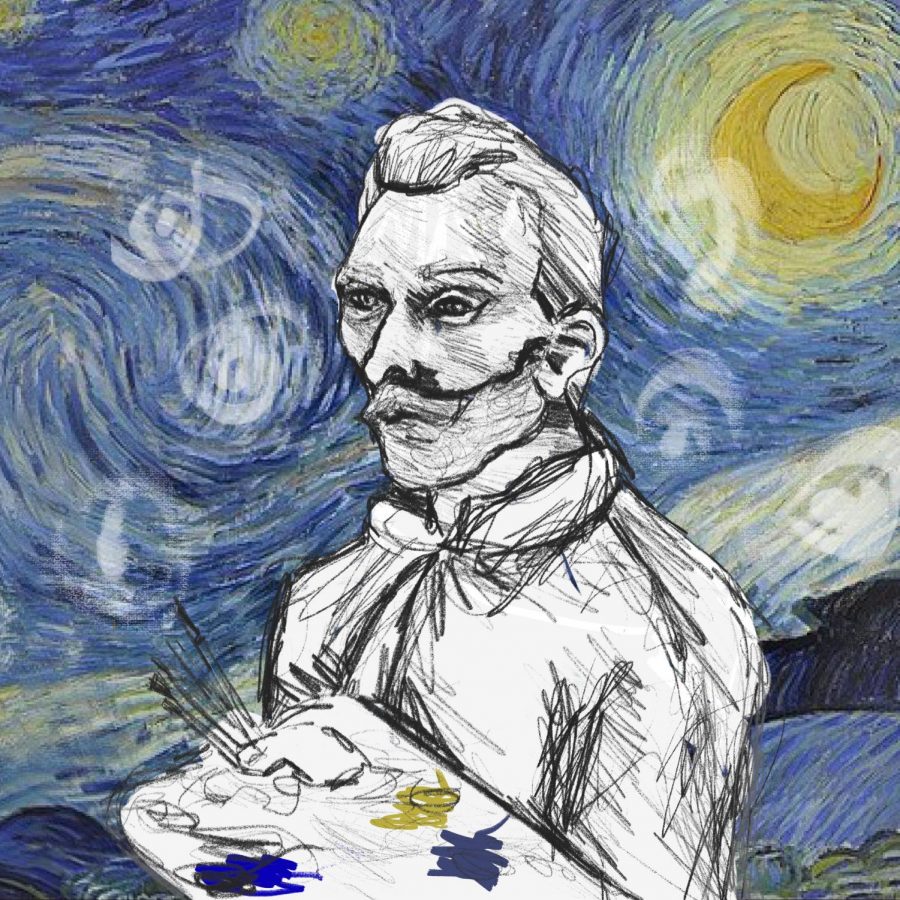 Even when Vincent Van Gogh's inner world was dark or colorless, he was able to create and find vibrancy and passion.

Beloved and world renowned artist Vincent Van Gogh is known for many things, but perhaps most famously for his short brushstrokes, vibrant colors, Starry Night, and cutting off his own ear. Anyone who looks at his paintings would say that a majority of them clearly display optimism and wonder, but interestingly enough, the life of Van Gogh was actually filled with trials and tribulations, episodes of disarming hallucinations and bottomless pits of despair. He often felt as though he had become a burden for his brother, he was struggling for success, and looked down upon by others for being eccentric.

There is much speculation as to why exactly- or if he even did it- Van Gogh cut off his own ear nowadays, but it was actually recorded that he did so in a hallucinatory manic episode, something Van Gogh was prone to having, and he was desperate to silence “the terrible noises or words that he believed he was hearing,” wrote Martin Bailey, journalist and Van Gogh scholar, in his book Starry Night: Van Gogh at the Asylum. By removing his ear, Van Gogh would have hoped to silence the- as he described it- “unbearable” voices. It was this action that Van Gogh himself took as a sign that he needed help.

Van Gogh checked himself into Saint-Paul de Mausoule in 1888 for a year, a lonely asylum where Van Gogh was to enter the darkest period of his life thus far; “One continually hears shouts and terrible howls as of animals in a menagerie,” he wrote to his brother, who loved him very much, but loved him from a safe distance, never once visiting his mentally disturbed brother. Van Gogh tried his best to keep resistance and defiance to the pain; “The uglier, older, meaner, iller, poorer I get, the more I wish to take my revenge by doing brilliant color, well arranged, resplendent,” he wrote resiliently. But the atmosphere was having a negative effect on him. Came his famous line from inside these asylum walls; “This sadness will last forever.”

An official report was found on the conditions of the asylum, and as typical during these times of poor understanding of mental health, the asylum was filled with neglect and an overall lack of care or understanding as to how to treat patients, some “elderly, incontinent patients lying on straw mattresses” that were “reduced to manure” (“Van Gogh’s ‘terrifying environment of French asylum revealed”). While Van Gogh would write the other patients were his “companions in misery,” he would also complain of the erratic behavior of some of them in letters to his brothers, how some would go on violent rampages and keep him up through the night screaming. “My surroundings here begin to weigh on me… I can’t go on, I am at the end of my patience,” Van Gogh would write. From his experience, he painted Prisoner’s Round, his most soul crushing painting that dismal sorrow radiates off of. And yet, astoundingly, it was in this asylum too that he would do something to inspire and provide hope for generations to come, inspiration and hope still lasting to this day. But we’ll get to that in a moment.

While committed, Vincent consumed paint and paraffin as an act of self-destruction and harm, and, as recorded by asylum director Theophile Peyron, attempted to poison himself on numerous occasions. Because of this, Van Gogh was moved from his vibrant room to a plain one, something any artist would recognize as cause for insanity in of itself. Not one family member or friend ever visited him. Eventually, despite evidence that Van Gogh was not stable enough to live outside of the asylum, he was released by his own request, writing that “the prison was crushing me.”

According to the book “Neurological Disorders in Famous Artists,” written by neurologists Julien Bogousslavsky and M.G. Hennerici, many mental health professionals look back on the consistent mood swings, deep depression,  and manic hallucinations of Van Gogh and are able to give him a likely diagnosis: Bipolar I, schizophrenia, or possibly both.

So it would appear he had a depressing life- what does that have anything to do with you? Why should you care?

You should care because Van Gogh once wrote “though I am often in the depths of misery, there is still calmness, pure harmony, and music inside of me.” You should care because he lived in defiance. Because, in his suffering, he never lost his ability to love and to love compassionately, to look up at a night sky full of stars and begin to dream, to wonder, to inspire. Can you place yourself into the shoes of a mentally disturbed, lonely, mocked, and unsuccessful Van Gogh, and imagine having a deep love for the world? Can you imagine being in the depths of despair and looking towards the stars and thinking ‘what a wonderful world it is’, to call it “enchanted”? Imagine being in his mental space and, instead of resorting to cynicism and reveling in your anger, saying this: “If one feels the need of something grand, something infinite, something that makes one feel aware of God, one need not go far to find it. I think that I see something deeper, more infinite, more eternal than the ocean in the expression of the eyes of a little baby when it wakes in the morning and coos or laughs because it sees the sun shining on its cradle.” You should care because, while in the asylum, he painted his Starry Night series. During the darkest time of his life, Van Gogh was able to paint brightly optimistic, inspiring images.

Van Gogh was never recognized within his lifetime. While this is most certainly disheartening, there’s something miraculous and very inspiring about it too; God always has a plan, and even if we appear to have no purpose, this perception is simply not true. You could struggle your entire life and die as an unknown, only to inspire millions for centuries to come after your death. Van Gogh only sold one painting while he was still alive, now they sell for millions.

Van Gogh matters- and beyond just his influence on the art world- because he tells us to always “find beautiful things as much as you can” and “admire” it as much as we can. He teaches us that God always has a plan, to hold onto our wonder. He matters because he is able to console millions of people with his art, he showed consistent kindness to those who bullied and shunned him, and he saw beauty and soul when his world felt drained of such. He practiced love when hate would have been far easier. And in the darkness- when that voice in him told him he could not paint, when nearly everyone around him also told him such- he picked up a brush over and over again and painted light. “I want to touch people with my art,” he wrote, and touch people he has, consoling those broken by life centuries after his death.

Vincent Van Gogh matters because he felt that “there is truly nothing more artistic than to love people.” He matters because he raised, and, through his life and beliefs simultaneously provided a semblance of an answer to, this question meant to be rhetorical: “What would life be if we had no courage to attempt anything?”

Do not let the dangers out in life keep you from living it, and living it with a fierce love for all to see. Wherever there is a shadow, there is a light.