Why We Learn The Way We Do 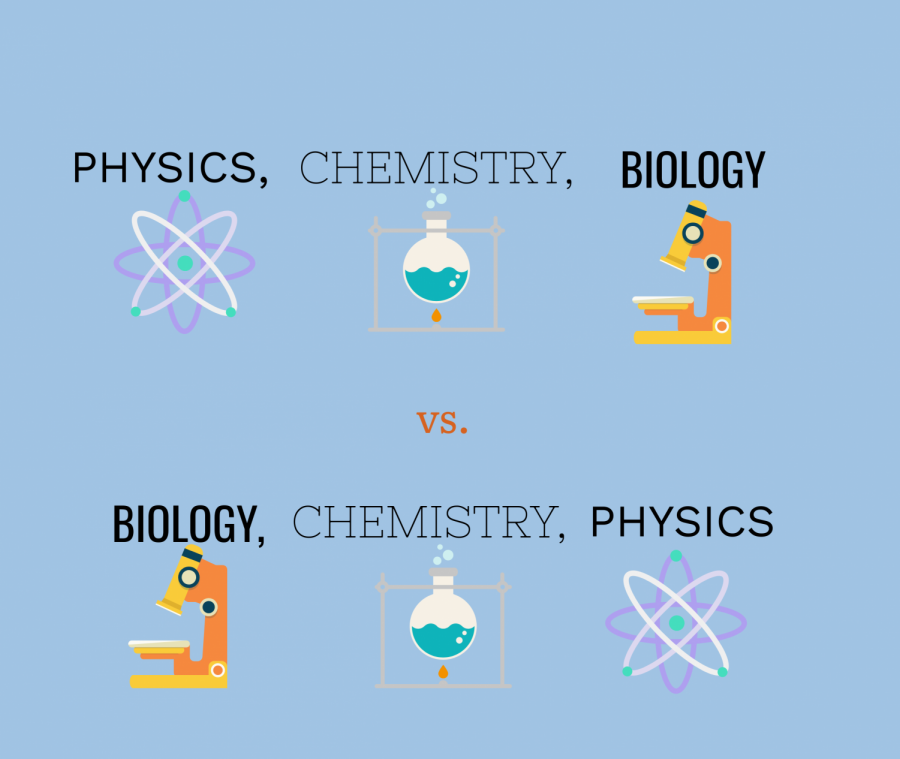 science has changed for highschoolers.

Why the switch of order? The new physics-chemistry-biology (PCB) sequence has been implemented since at least 2009, yet freshman entry classes in physics invariably fall short of the math level needed to comprehend the formulas. Biology, on the other hand, appears to most students as the easiest course of the lot.”

Despite the sometimes rough transition from middle-school level science to physics, there is an easy-to-understand rationale behind the decision. In order to better grasp the connections from electrostatic and nuclear forces to upper-level microbiology concepts and biochemical processes in cells, the American Association of Physics Teachers (AAPT) asserts “students need a solid background in both physics and chemistry”.

In fact, many of the subjects at the modern school building were predetermined twenty-eight years earlier based on ten leading educator’s best approximations of how kids learn. The country schoolhouse of the 1800s was led by one teacher for children as young as seven years old to as old as fourteen years old, with the children being grouped not so much by their age, but my abilities. Many parents in fact preferred the system as their kids would develop interpersonal skills by interacting with peers much older or younger. A second-grader would find themselves having to cooperate with a tenth grader, in the end, both becoming the better for it. But by the 21st century, grades moved through the levels of school together from elementary to high school, which has benefits as well as unintended consequences.

When it comes down to whether physics is a good stepping stone for later chemistry and biology studies, the measurement of ‘success’ is hard to pin down. Concerning whether physics is beneficial for later chemistry and biology studies, a scientific study published in the journal Science found students taking a high school level science class were not more proficient in a different, college-level science course. In 2011, the United States was well below the standards espoused by international performance in science, engineering, technology, and mathematical, with Missouri, in particular, was below average on a national level in the Science and Engineering Readiness Index (SERI), despite recently assumed aggressive measures to implement Physics First programs in universities and high schools.

However, one reason to attend physics classes first as a ninth-grader stem from the fact that recently learned algebra concerts can be implemented immediately. Accordingly, 8th graders are motivated to acknowledge the importance of building a good foundation for upcoming challenging science classes. Plus, according to the American Association for Employment, physics far and away is the most understaffed subject in every region of American educational institutions, even compared to other math and science education fields, language instruction, and even general education vocations. Yet hopefully, early exposure to physics is projected to increase interest in the field, leading students to take the course again later in high school or eventually major in physics in college.

Overall, it is important to take each of the three pillars of science: physics, chemistry, and biology at least once in one’s high school career. Phil Sadler (winner of the Robert A. Millikan Award for physics teachers) and Robert Tai also published an article that correlates strong high school courses in physics and chemistry with success in the same subjects at the collegiate level. Specifically, physics is generally recognized as a cornerstone of numerous STEM (science, technology, engineering, math) disciplines and taking the course when one is younger is strongly linked to ultimately earning a degree in a STEM field. Likewise, biology aids in understanding the mechanics of living systems and chemistry explains how compositions of matter and energy interact at the atomic level.

Leon Lederman, an advocate for the cornerstone-to-capstone PCB program, says, “the momentum is picking up,” but “we need more physics teachers and lots more data…It will take another decade to get our educational ‘system’  into the 21st century.”In the meantime, though the cohesion between the sciences is hard to comprehend now, by the time one reaches the end of their career, the decisions will be better understood. Ultimately, for those among the 19% of science students in the U.S. struggling in their respective courses, remember: ‘Once you overcome a mountain, it is forever behind you.’