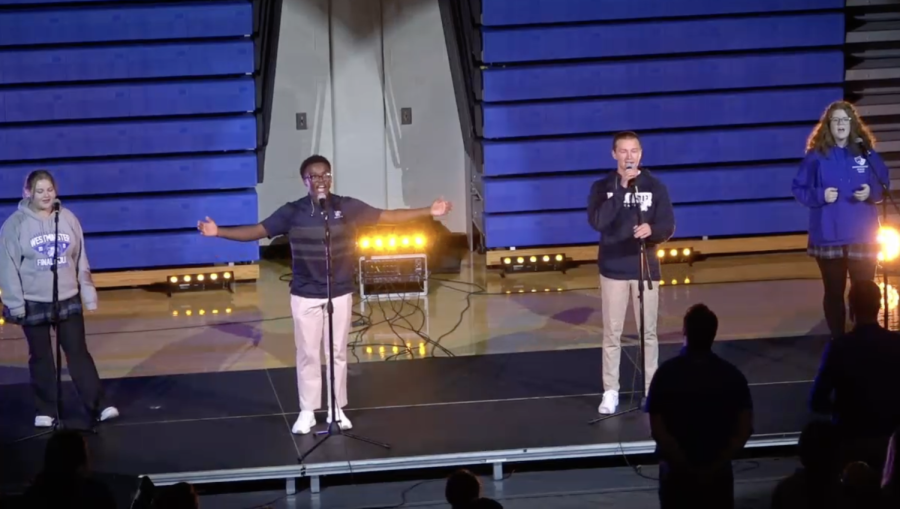 Those who lead chapel at Westminster have an impossible task: engaging an audience of over 900 judgy middle and high school students. Each year, the chapel band has to find new and exciting ways to get their audience involved in worship. Students are obligated to attend chapel every Wednesday, and finding ways to entertain each week is often near impossible. They’ve tried a physical band accompaniment, acoustic versions, high-energy contemporary, and more, and each time students seem to become less interested in the performance as the morning goes on.

Over the years, worship leaders changed and the group evolved. Individually, last year’s band possessed talented musicians. But with the absence of graduated senior leader Kaitlyn Butler, chapel leadership was ready to undergo some renovations.

This year, the group was reinvented to recapture their audience. The band consists of three seniors and one sophomore so far, all who met the requirements of leading worship at their own church and keeping up with their grades at school. Even though the band only consists of singing with no physical band accompaniment, the energy they bring to the Arena seems to have refreshed the chapel environment.

Even the band this year noticed a difference in the response of the crowd compared to last year. “I have to say, the audience calmed my nerves because of the support that they bring to every gathering,” said Charlotte Roberts, sophomore and chapel band member.

Cheers, clapping, and an overwhelming amount of singing along has made chapel come alive this year. Other audience members noticed a change in the atmosphere as well. “I really enjoy hearing the talent of these new performers and I think that they work really well together,” said Natalie Klein, junior.

Members of the band also agree with the audience’s assessment. “The people I perform with work very well together and are some of my best friends. I love them with all my heart, and am thrilled to get to perform with them a few times before they leave after Senior year[…]If I had to come up with a word to describe us, it would be family,” said Roberts.

This chemistry within the group seems to be what allowed this band to captivate the school so well. Future performances will be more telling of how the audience will react throughout the year, but the first few weeks were enough to tell that according to much of the student body, this chapel band renewal was worthwhile.

The band is still open to finding new members within the Westminster community, so the group still has the opportunity to grow and change as the year progresses. With the potential to see new talented singers and musicians, the student body can get excited to know that they will surely not have a boring chapel band experience this year with the talent on stage.

Chapel is meant to bring the community together through worship, and this new wave of talented worship leaders does just that. They are strong in their faith, energetic on stage, and captivate the crowd with their voices. Students and staff may not know what this school year will bring, but what everyone can count on is a solid chapel worship team to uplift dreary, mid-week spirits.