How can the labels found in grocery stores be misleading to customers? 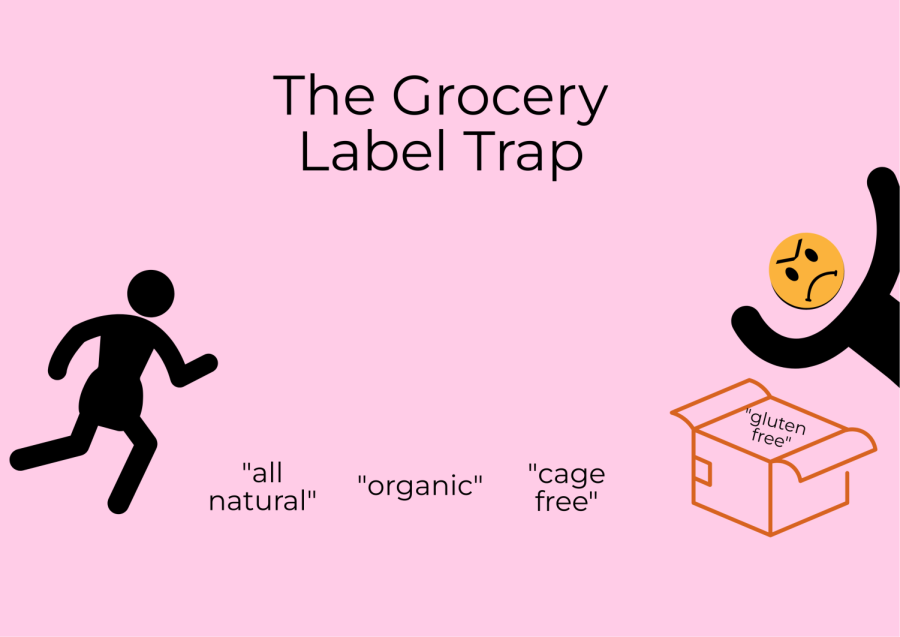 In what ways do the labels at grocery stores "trap" their shoppers?

When people go grocery shopping, most likely, they will find some sort of label on the food that they choose to buy. These labels can range from being on meat products like beef or chicken to being on snack boxes like goldfish and Teddy Grahams. But what do these labels actually mean? How can some of these labels be harmful to society?

Erin Brodwin from businessinsider.com was able to give a complete guideline to what some of the labels in grocery stores mean. Some of the more commonly known labels that she listed included ones like “all-natural, organic, non-GMO, cage-free, and gluten-free.”

Brodwin went on to explain that people often were confused as to what all-natural meant, thinking that it meant “that it was free of artificial ingredients, pesticides, and GMOs.” This is far from the truth. In actuality, Brodwin says that “according to the FDA, the agency ‘has not developed a definition for use of the term natural or its derivatives.” There is no meaning behind the term.

Brodwin then talks about the definition of the label organic: “According to the USDA, products that are ‘certified organic’ can’t contain GMOs and should minimize pesticides and anything synthetic (i.e.: made in a lab).” They also “contain strictly organics.” However, Brodwin reveals that a review was created over a span of 50 years that compared organic foods with nonorganic foods and “concluded that they were ‘not significantly different.’” There is no point in buying products that say they are organic when buying a non-organic product is just as healthy.

With non-GMOs, Brodwin says that the meaning behind the label comes from products that “have ‘been produced according to consensus-based best practices for GMO avoidance.’” In the last decade, however, research has shown that GMOs are actually safe, so it is okay to eat foods that come from genetically modified crops.

According to the people from ahealthiermichigan.org, products that have a cage-free label on them do mean that the animals (for example, chickens) have room to move around and are not cooped up in cages, but it “does not mean they have access to the outdoors or enough space to roam.” It is good that the animals are not stuck in cages, but it is still not good that they do not have any room to truly walk around as they please.

Brodwin explains that “gluten is the protein composite in wheat, barley, and other grains.” Most products that have a gluten-free label on them are for those who are allergic to gluten. Shreya from doseofwellnessblog.com explains a downside to products with a gluten-free label on them: “Sodas are gluten-free, that doesn’t make them healthy.” She then goes on to say that “[That] might be [an] extreme example but there are many more sneaky foods that can trick [people].”

In general, when someone goes to a grocery store to buy food, they should be mindful of what they are buying and look at the labels on products carefully. If people do not do this, then very scary situations can occur involving food allergies. The people from theconversation.com explained how in November of 2019, there were nine alerts that were made by the Food Standards Agency recalling food allergies. Some of these products were,

“Waitrose recalling its Carrot and Coriander Soup as it did not declare the fact that it contains barely and celery, Aldi recalling Breaded Chicken Steaks due to undeclared milk, and Mondelez recalling Cadbury Dairy Milk Little Robins because some products contained almonds which were not mentioned on the label.”

For these situations, theconversation.com concludes that the laws about labeling food allergies need to be enforced more than they currently are.