College Board Controls You 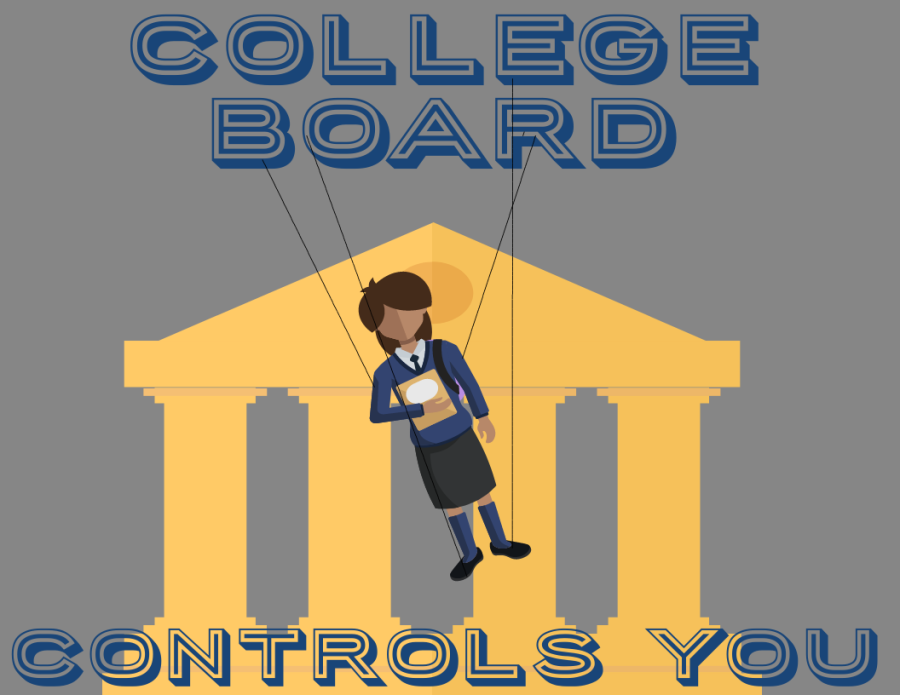 CollegeBoard and ACT Inc. are the 2 major companies which control the majority of college admissions.

Students in the college application and admissions processes are more highly-dependent on CollegeBoard and ACT’s resources than they even realize.

What is the company that makes over $1 billion in revenue every year on high school testing? If you said College Board, the company which administers AP and SAT testing, you’d be correct. ACT Inc., a company which makes a competitor test to College Board’s SAT, is also a multi-million dollar non-profit. When students pay the fee to take an AP, ACT, or SAT test, that money goes straight to College Board or ACT Inc., and while they are both technically non-profit companies, they make money off of students who feel they have to take these tests to even go to college. Because students need to pass these tests with a relatively high score, many spend additional hundreds to thousands of dollars to study and receive tutoring—all before they pay tens of thousands to go to a college or university. College Board and ACT Inc. force families to spend precious time and money on testing so they can further their control over college admissions.

Over the past twenty years, the price of education has gone up exponentially. In-state tuition and fees for public universities alone have grown 211%, while public out-of-state and private university tuition have increased by 171% and 144%, respectively. A shocking statistic, this reveals that in-state university tuition is increasing at a much higher rate than both private and out-of-state.

That means that this increased tuition has caused a simultaneous increase in the need for scholarships. That is where College Board and ACT come into the picture—they make more and more students each year need to take several AP classes and retake the SAT or ACT multiple times until the student’s desired score is achieved. This, of course, gives each company increasing amounts of business each year. These companies influence students into a dependency on their tests which allows them to control college admissions across America both directly and indirectly. Even with Covid-19 presenting a short and sweet decline in test-taking, these companies have managed to stay highly relevant.

This striking conclusion begs the question for some students of whether using College Board and ACT resources is even necessary. As of 2021, over 75% of 4-year universities are test-optional, meaning that a student does not necessarily need to submit a test score in order to be admitted. But, those test scores do make a difference when it comes to academic scholarships. Most schools have benchmark ACT and/or SAT scores that coincide with different scholarship amounts. This is why so many students pay to participate in tutoring for these tests and spend extra time taking GPA-boosting AP tests. The dependency students have on these companies is not changing anytime soon.

The trend of students at Westminster taking AP exams has stayed fairly consistent the past few years, with a slight decrease starting around 2018, likely due to an increase of students taking SLU’s 1818 credit over the AP exam. Still, over 400 students at Westminster alone consistently sign up for AP exams each year. This popularity comes from any number of sources, particularly parent expectations, peer pressure, and societal “norms.” “Some families have the idea that taking lots of AP classes will take a semester or two off of college, but this is usually not true. If anything it might save time and allow a student to pick up another major or minor,” said Lori West, College Counselor. It has been ingrained into students’ heads from so many sources that they must take as many advanced placement classes as possible, but this necessity truly depends on the student’s goals. Even though it does look good to colleges to see a high AP score, some will not need to be dependent on them in order to get into their desired school.

These standardized tests, while some say they are being phased out, still control academic scholarships across America and are important to take in order to get into college. “It definitely is still worth it to retake these tests multiple times to get your best score, especially when most schools take a superscore,” said West. These tests still matter when universities need a more efficient way to review a student. They, as of right now, are still at a place where using test scores makes it exponentially easier to understand a student’s grades. This is because it is much quicker for an admissions officer to review a test score than each of their grades along with an essay.

But, while these companies are still raking in money, families are struggling to afford the whole test-taking process. Students who cannot afford tutoring and can maybe only afford to take the test once are at a significant disadvantage to someone who has done two rounds of expensive tutoring and test-taking. This is how College Board and ACT hold a grip on lower-income families: they continue to instigate the struggle of sending these parents’ children to college.

Whatever course of study and test-taking a student chooses to do, they still rely heavily on the exams these companies provide. Even with schools going test-optional, they still control the majority of university admissions nationwide. As more and more students continue to take and retake these tests, College Board and ACT only get a tighter grip on the lives of high school upperclassmen—and students become more and more dependent on these scores to get where they want to go. And while it’s important to note that these tests are genuinely important for students wanting to further their education at a 4-year university, it is also important to know who’s influencing who.