The top 5 family friendly movies to watch going into the 2021 spooky season. 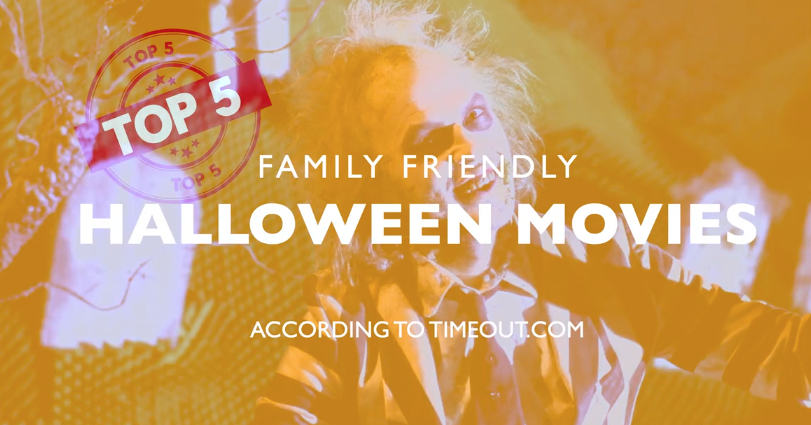 With Halloween quickly approaching, reporters Triston Scales and Abby Johler went on a quest to find the top five family friendly movies to roll right into the 2021 Halloween season. With the help from TimeOut.com, Abby and Triston were able to compile the most terrifying list possible for the average horror movie loving family.

This list starts off with a classic Tim Burton; Edward scissorhands. Directed by one of the Masters of Halloween cinema, Edward scissorhands tells the story of the artificial human, the gentile Edward and his journey to find acceptance in the suburbs after being taken home by peg, a sweet saleswoman.  While Edward is living with Peg and her family, he slowly begins to fall in love with Peg’s teen daughter. While this isn’t your typical halloween movie, it is a must watch for those who are looking for a heartwarming family movie night watch.

The second movie, also thought to be directed by Tim Burton though it was directed by Henry Selic, is Coraline. Considered to be another halloween classic, Coraline tells the story of Coraline and her journey into another world. While exploring her new house, Coraline finds a door that leads into an alternate mirror dimension, one that was seemingly much better than that of the world she left behind. However, her new family decided that they wanted to keep her forever. In the end, she must use her bravery, curiosity, and a curious black cat to escape the button sewn clutches of her other mother. This story is a great way to get in the spooky mood before the Halloween season, and is a great watch even without the motive of Halloween to push individuals to watch it.

In the third spot is a true classic for nostalgic watchers and younger audiences alike, the original 1984 Ghostbusters. In this ghost fighting frenzy, a group of estranged university scientists decide to take up a new occupation in the supernatural. While they originally enter the job for money, after finding a portal to an alternate dimension threatening to take over New York City, the ghostbusters must stand up and fight in order to save New York. There is something for everyone in this movie, and the ridiculous, ghoul filled story will leave its watchers rolling in their seats with laughter.

Second is yet another story directed by Tim Burton, the Nightmare Before Christmas. In this film, watchers are transported into the frighteningly friendly Halloween town in which the town’s beloved king, Jack Skellington, has become bored of the same halloween activities that occur every year. At the peak of his distress, Jack stumbles upon the bright and cheerful world of christmastown through a doorway in the woods. Fascinated by their way of life, Jack decides he will create his own Christmas by replacing Santa himself. However, Jack quickly realizes that becoming something he’s not can have serious consequences. This film is a must watch for anyone and everyone who loves halloween, christmas, or any holiday in general! The heartwarming characters and amazing music enraptured every audience that watches, and will continue to be considered a classic for many years to come.

Finally, in first place is Beetlejuice, a death defying story of the haunting of the Deetz family. After Barbra and Adam Maitland die in a terrible accident, the two go on to haunt their residence before their death. After a couple years, a new family named the Deetzes move into the haunted home, and the Maitlands are in no way happy about it. In their attempts to get rid of the Deetzes, the Maitlands unknowingly attring the vengeful spirit of Beetlejuice, who strives to help them in their quest to drive out the family.  Unfortunately, hiring Beetlejuice isn’t as great of an Idea as it might have been in the eyes of the Maitlands. This story is amazingly wacky fun and is great for all ages. This movie has also been adapted into a musical as of recently, so those who really enjoy the movie can check it out as well!

So, for this spooky season , go check out these halloween classics to really get that spooky feeling, and who knows? This halloween, you could experience your own haunting!