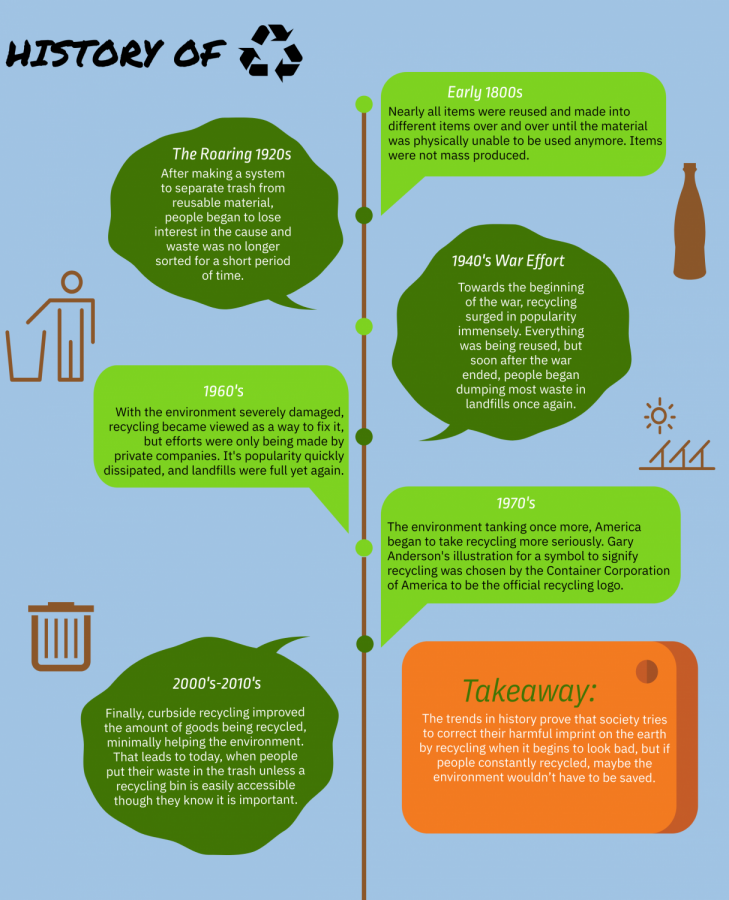 Recycling has been in effect for longer than you would know

Reduce. Reuse. Recycle. Recycling as we know it is a relatively recent practice, but few know that people today, specifically in America, recycle far less than ever before. Humans have been turning waste into reusable material since products began being physically made because the answer to the question regarding what should happen to the waste was obvious.

We traditionally think of recycling as turning used paper into new paper or old soda cans into pristine cans. Recycling actually is anything that someone would not have used again turned into something that will be. This practice was extremely common in the 1800s when clothing and many other items were not mass-produced. Sheila Mulrooney Eldred explained in her article for History: “If the elbows in a shirt wore out, you’d take the sleeves off, turn them inside out, and voila: new shirt. If a dress went out of style, you added new buttons or sent it back to the dressmaker to fashion a trendier frock. Eventually, the fabric would be turned into a quilt or a rag rug or just a rag.” This common recycling created a different relationship with material goods than we have today because everything they had was made by someone they knew, and they weren’t so quick to throw something in the trash.

But when trash pickup began in the late 1800s, and the world of recycling looked similar to how it does today with recyclable material being separated from the rest with minimal effort. However, there was a short period of time in the early 1920s when recycling was forgotten about entirely and nothing was being sorted.

Recycling surged in popularity again during World War II due to the war effort, then after the war ended, people began throwing everything in the landfills yet again. This severely destroyed the environment, so in the 1960’s recycling finally was linked to environmental improvement and used to attempt to fix what landfills had done. However, these efforts were only being made by private companies and individuals, so once the initial surge of popularity dissipated, landfills began filling up again in the 1970s. According to writers of Middle Tennessee State University, recycling surged in popularity yet again in 1970 when Gary Anderson, a student enrolled at the University of Southern California, entered his design for a symbol to signify recycling for the Container Corporation of America. This is the symbol that is permanently etched in our brains when we think of recycling today.

Finally, curbside recycling improved the number of goods being recycled, minimally helping the environment. That leads to today when people put their waste in the trash unless a recycling bin is easily accessible though they know it is important. The trends in history prove that society tries to correct their harmful imprint on the earth by recycling when it begins to look bad, but if people constantly recycled, maybe the environment wouldn’t have to be saved.