What More Do They Have to Deal With? 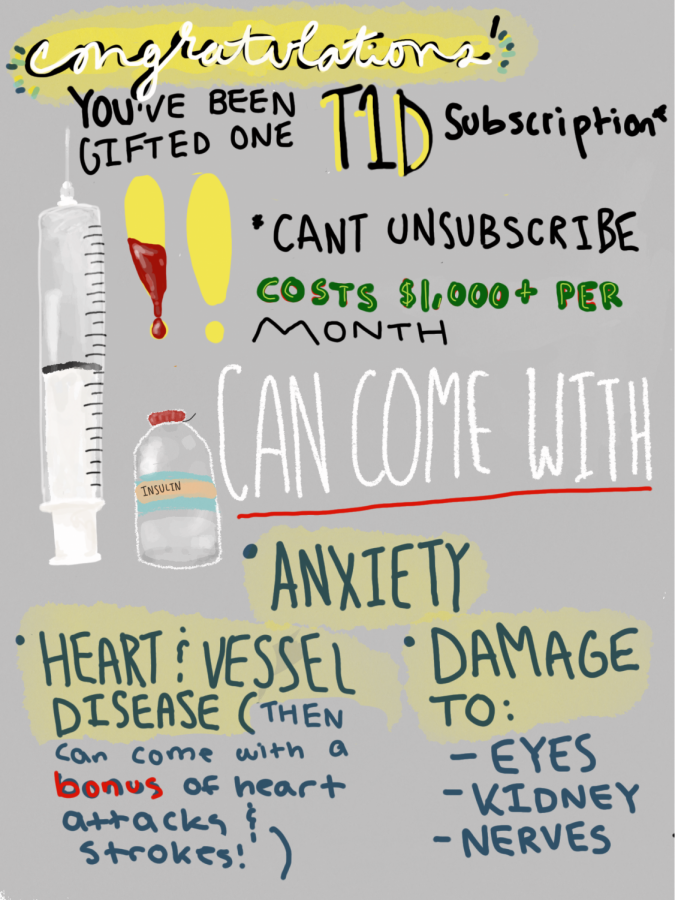 Unlike type two diabetes, type one diabetes is incurable and unpreventable.

When someone comes back from the buffet with five cookies or two slices of cake, there’s a recurring joke: “Be careful or you’re going to get diabetes!” What I don’t think people realize is that diabetes is much more complicated than that — there are actually two types. There is the type most people know about, type two, which is the one that is usually brought on by an unhealthy lifestyle, and then there is the type that is autoimmune, meaning there is absolutely no prevention or cure for it. This is type one.

To understand type one diabetes, or T1D for short, you have to understand how a normal person’s body works. According to Mayo Clinic, humans have an organ called the pancreas, which produces insulin. Insulin is the hormone that converts the sugar in food into the energy your body uses for all of its functions. Type one diabetes causes blood sugars to rise and fall frequently, and this not only makes you feel crummy, but it can also have long term effects on the body, such as nerve, kidney, and eye damage, as well as heart and blood vessel disease. Heart and blood vessel disease can then lead to heart attacks, strokes, and high blood pressure. What’s worse is that an extreme low or high blood sugar level can send an individual into a coma and, if dramatic enough, even lead to death. A person with type one diabetes does not have a functioning pancreas because of a fluke in the immune system. For reasons that are currently unknown, the immune system attacks the insulin producing cells in the pancreas. Scientists also have yet to discover why this type of diabetes is typically diagnosed in youth, but is also increasingly developing in adults.

In order to live with diabetes, one has to buy insulin to inject into his or her body, in addition to a blood sugar kit, hospital bills, supplies, and more. This can be extremely costly, and according to Robin Respaur, a journalist for Reuters, the average annual insulin cost alone was 5,705 dollars in 2016. Prices have risen since then. Bridget Montgomery, a mom with a T1D child, said in an article she wrote for the Diabetes Council that she spends up to 82,940 dollars a year on her one child with diabetes.

Having type one diabetes usually means an individual was genetically predisposed to the disease. It can’t be prevented, it can’t be cured. And it can be difficult to understand and truly know how to manage the disease. See, diabetes has no clear instruction manual, making it hard to navigate and deal with. My aunt once described it perfectly: “It’s like playing a board game with real life, dire consequences with rules that are always changing, and you can never stop playing – not even for a minute.”

Diabetes, especially type one diabetes, is compared to a board game that nobody can really tell you how to play, where your fate is controlled by a role of the dice while you are stuck trying to combat the repercussions, and where things are constantly changing. People pull the rug out from under you, adding on and abandoning rules every few seconds. What you once thought was a good strategy isn’t all of a sudden.

As can be expected, type one diabetes can lead to many mental health conditions, the most prevalent being anxiety. According to doctors Kaitlyn Rechenberg, MA, MPH, MSN, Robin Whittemore, PhD, and Margaret Grey, DrPH (who all graduated from Yale School of Nursing) in an informational piece found in the US National Library of Health, “Mental health conditions occur in approximately 33 percent to 42 percent of youth with T1D, a rate two to three times higher than peers without T1D.” This is assumed to be a result of hypervigilance, the constant dread of knowing your blood sugar level could go very wrong, and the fact that people affected with type one diabetes often can’t experience life the way others get to. They often have to sit out on fun activities if their blood sugar is too low, they feel tired and their bodies ache when their blood sugar is excessively high, and they are judged constantly for whipping out a phone during school in order to check numbers or text their parents. Some scientists say the combined hypervigilance and attentional bias increase sensitivity to negative stimuli. This leads to either state anxiety (“transient experience of the physiological arousal associated with feelings of dread and tension,” according to the US National Library of Health) or trait anxiety (the likelihood of responding to stimuli with anxiousness), and eventually both.

And here’s the cherry on top for people with type one diabetes: they have to deal with that joke that simply won’t go away. When something is sugar-filled or particularly caloric, people too frequently say, “Looks like instant diabetes, am I right?” When someone eats more than usual, they are told jokingly, “You’re going to get diabetes!” What people don’t realize is how degrading, insensitive, and stereotypical this joke is. My younger brother, Ethan Harris, is one of the thousands that deal with T1D, and by joking about it, it’s putting the blame on him, invalidating this horrible, horrible disease, and making him feel isolated. So, whenever you open your mouth to say something about diabetes or hear it being discussed around you, remember this: there are two types of diabetes — and the causes and consequences are not equivalent.