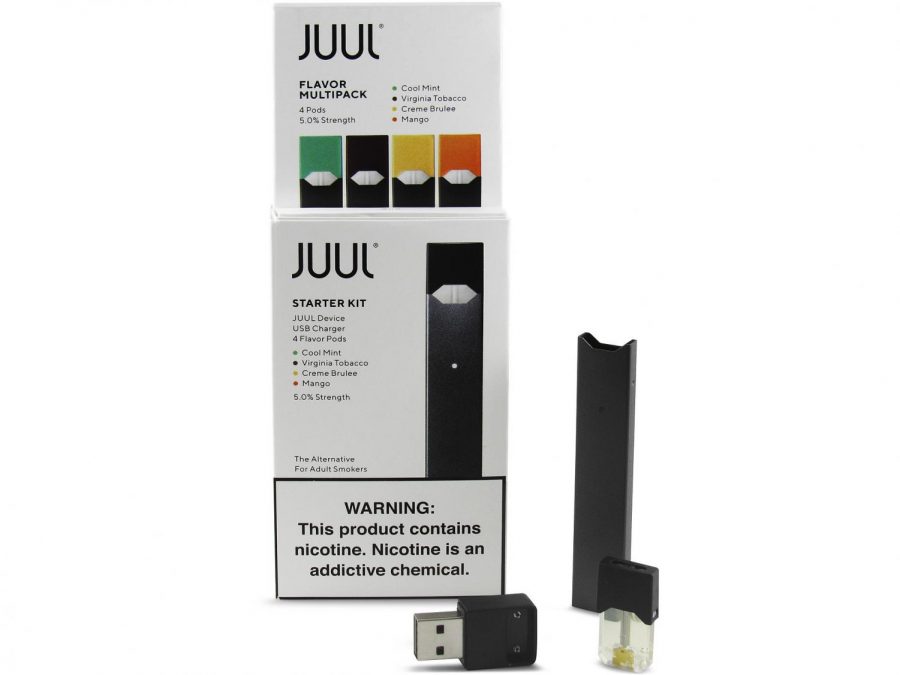 Juuls have become a serious problem in high schools across the country.

Last April, with my eyes opened wide about the struggles of vaping, juuling, and substance abuse even at a Christian school like Westminster, I wrote a story about these issues and the effects they have left on our community. Five months later, I want to know what, if anything, has changed.

In short, for the few parents or students who have not heard the term “juuling,” a Juul is “a trendy vape that resembles a flash drive and can be charged in a laptop’s USB port,” according to Time Magazine. A Juul device costs $50, with a four-pack of “pods,” which come in several unique flavors, costing $16. This may seem like a high price to pay, but for many high school and college students, the money is well worth it for the sleek and easy-to-conceal design of the Juul, as well as the flavored pods, which each contain as much nicotine as an entire pack of cigarettes.

Developed by two Stanford University graduates, the Juul was designed with the intention of helping smokers gradually move away from cigarettes and smoking altogether by engaging in this e-cigarette alternative. According to an article by Time Magazine, Ashley Gould, the chief administrative officer at Juul Labs, claimed that the Juul was not designed to resemble a USB port or to look discreet to allow students to hide the devices in school but instead to take on an entirely different appearance so that smokers would not be reminded of their former habits.

“Freshman year I was sitting in class, and I didn’t even realize that the kids behind me were Juuling. I realized later that the broken pen that was on the desk was actually a Juul,” said Elle Pierson, junior.
Regardless of the original intent, the Juul fad was adopted by teens shortly after its release in 2015. An article published by Vox in August 2018 explains how in 2017, “the e-cigarette market expanded by 40 percent, to $1.6 billion, with a lot of that growth driven by Juul.” In March 2018, Juul sales alone occupied over half of the e-cigarette retail market sales in the U.S. The popularity of Juul is shocking, towering over hundreds of other e-cigarette options after only a few years on the scene.

Even with the age requirement of 18 in order to purchase Juuls in retail stores and age 21 to order online, teens have no trouble acquiring the devices and satisfying their quickly developing addictions. Although Juuls and other e-cigarettes contain fewer toxic substances and chemicals than normal cigarettes, vaping can still expose users to potentially cancer-causing chemicals, according to Time Magazine.

Because there is not much research or information on the effects of Juuling at this time, it is not yet certain how dangerous or harmful Juuls are to a person’s long-term health. However, there likely are health risks involved, considering the amount of nicotine that a single pod contains. Nicotine is an extremely addictive substance, and even a few cigarettes or puffs from a vape can lead to a lifetime of addiction.

“Juuling is often presented as a harmless alternative to smoking, but, in reality, e-cigarettes can contain nicotine which damages a teenage brain. Also, teenagers who vape are more likely to smoke when they get older,” said Alyssa Legters, junior.

In the past two years, Juuling has stormed high schools all over the country, including in St. Louis, and unfortunately, even including our Christian school. Former Dean of Students, David Schall, described the issue during the 2017-18 school year: “‘Epidemic,’ though a powerful word, might be an accurate description. As a general rule, what we as a school actually see or ‘catch’ is a very small percentage of what is actually happening. Based on the number of situations we’ve dealt with this year alone in these areas, along with rumors we hear, I would venture to guess, these are significant issues in the WCA community.”

So, that was Juuling at Westminster in April. But now in September, what has changed? The “Juul Wave,” as the trend has come to be known as, seems to have died down a bit, but both students and faculty at Westminster alike agree that Juuling and vaping, in general, have not decreased in popularity.

“As a society, [Juuling] is not less popular,” explained Tim Muehleisen, current Dean of Students.
Perhaps because some students have seen the consequences of Juuling at school, they have decided to retire their harmful habit to their homes or other places where it is easier to conceal. But, unfortunately, the problem has not been solved, and the Juuling epidemic drags on.
“In my opinion, it doesn’t seem like [the issue] has changed much, but I do think that people are doing it less obviously now and not in class anymore,” said Pierson.

Although Juuling may seem like old news to some, the issue continues to grow in high schools, and there is no sign of the alarming fad ending anytime soon. Considering the addictive properties of nicotine and the detrimental effects Juuling can have on impressionable teens, this is not a surprise.

“People might start [Juuling] for many different reasons, but a large reason kids continue to Juul is because of the addictive nature and taste it provides,” said Alyssa Pritchett, junior.
Although the Juul may still be thriving in popularity with some students at Westminster, not all students are at fault. Many teens, including myself and my friends, choose to avoid not only Juuls, but also alcohol, drugs, sex, and other dangerous pitfalls because we have decided to protect ourselves and our futures.

“I choose to abstain from [Juuling] because for me it is a matter of how I was raised and the morals that my parents planted in me at a young age. I know that Juuling would upset my parents because they want what’s best for me and something that damages my lungs and can become addictive would not be beneficial for me at all. I wouldn’t want to lose my parents’ trust by directly disobeying them because that could lead to greater consequences down the road and even fracture the relationship they worked so hard to form and help grow with me,” said Pritchett.

So, is Juuling still a problem? Absolutely. Should we still be on guard for the effects it could have on our community? Yes. And could there be a new fad that swoops in with equally alarming effects? Definitely. However, if we maintain an open conversation about the issue and confront the problem honestly, instead of trying to hide it, we may be able to greatly minimize the presence of Juuling at Westminster and encourage better decisions in the future for those who have been involved.