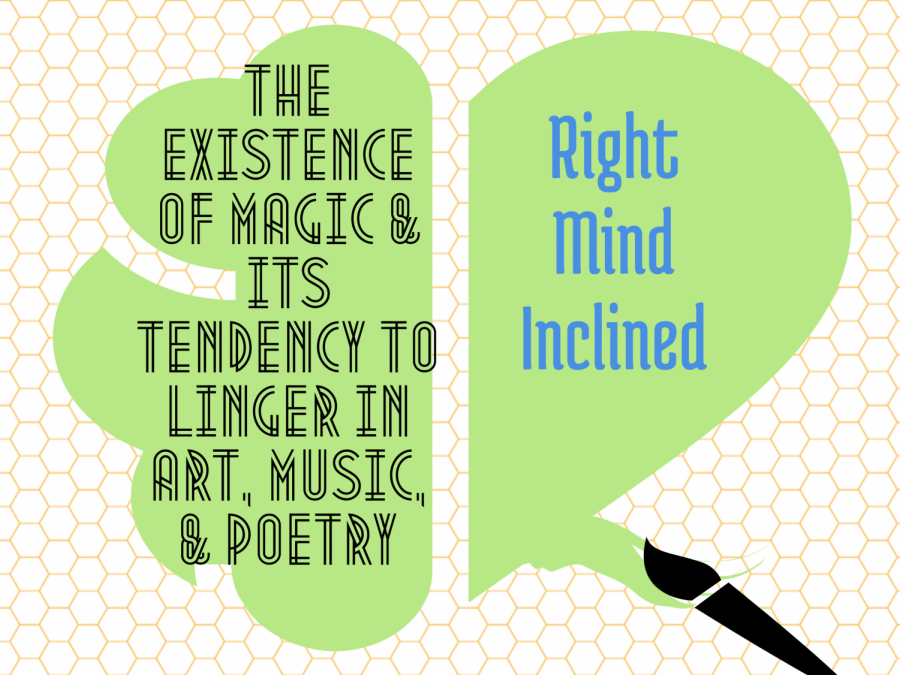 The Existence of Magic & Its Tendency to Linger in Art, Music, & Poetry

I believe in magic. Feel free to call me silly, but it won’t change my belief.

Let me start this by saying no, I don’t believe in brew a potion magic or mythical creature magic, or superhero magic or wave a wand or flourish a hand magic. The magic I believe in is realer than reality, more elusive than time, and far deeper than the deepest ocean. It isn’t of logic, it isn’t of the body, it isn’t of the wholly physical; it’s of the soul, it’s of the heart, it’s of unknown truths no man can wrap their head around.

It’s so wonderful and great, so incomprehensible that I can’t explain it. I don’t know what it is, I just know what it is of and that it exists. I know it flows through our veins, it beats in our hearts. I know it lingers beneath the dirt like a slumbering dragon, like a beast so powerful some fear that it might awaken, not realizing it already has before and does so all the time. I know there are traces of it running through our eyes, providing the twinkle in them when we have been stirred with passion. I know, as it is found in poetry, that it is poetry, and it’s gorgeous and intangible and wondrous and breathtaking and ineffable. There is magic, and knowledge of this magic is what makes an artist an artist and a poet a poet.

It’s secretive, but when you find it, you just know. For example, whenever I look at a painting in Van Gogh’s Starry Night series, one thing always pops up into my mind: this guy knows something we don’t. He’s not only seen the magic, but he believes it, and somehow he understood it as much as a person can understand such an elusive thing, which isn’t much, but it’s enough. He knew this world’s secret, and it drove him a little mad; I truly believe this. Every swirling brush stroke, every paradoxically vibrant and dark color pulses with this intangible magic. I don’t know what that means exactly, but I know it means something.

There are those songs, those rare, breathtaking songs that resonate in your soul. The songs that pull you in, entrance you, dance through your existence and settle into your bones, forever engraved in you. The greatest example of this phenomenon I can think of is the song Where The Streets Have No Name, by U2 (my all time favorite band). There is not one time I listen to that song and don’t want to run down the middle of the street with my arms spread wide. This, I truthfully believe, is magic.

But perhaps more than in art, more than in music, I personally have found the greatest proof of magic of all: poetry. Poetry is both the encapsulation and liberation of all things that contain magic. It is the freedom to feel and to feel deeply, the place to think freely, a powerful longing for an unknown unattainable, with all of it wrapped up in dazzling descriptions and unique metaphor; all things so very magical. So it is no wonder that I, like many restless dreamers on the search for magic and something meaningful, have finally found the place where I belong. And now that I have found my home between rhythm and rhyme and breathtaking lines, I don’t ever want to leave. But because poems contain the most magic, I can explain their magic the least. Part of me doesn’t want to explain the magic. I fear I would spoil it, like I would be spreading around some sacred, personal secret.

I have no doubt that some people might think me childish and illogical if they were to read this, but it doesn’t really bother me, because nobody can convince me that magic doesn’t exist, not after I have gazed upon wildflowers and seen a pair of eyes ignited by passion, not when I have danced through art and music and poetry, not when I have seen great purple light tear through the sky as rain crashed down in fervent force. Not when I have seen foxes in the woods, not when I have felt in my soul a sensation I cannot describe other than being wondrous. I can only hope you will find and feel this magic too.

Never lose your sense of wonder,