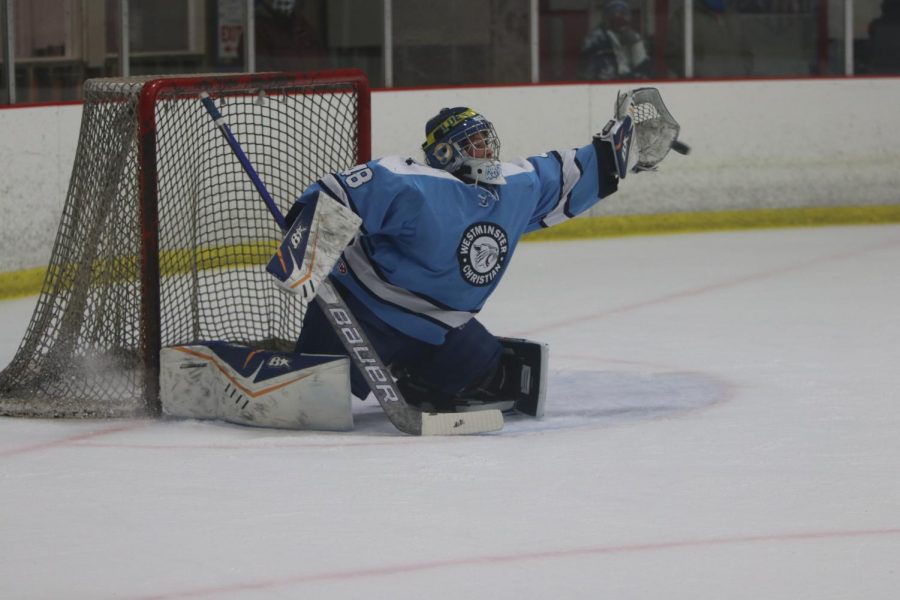 Emily Griege reaches for a save.

The Westminster hockey team had a rough start to the regular season. Through the first ten games, they had a record of one-six-three. With this record, it was looking as if the team would barely leak into the Wickenheiser Cup tournament and even the chance of falling to the Founders Cup. However, on Thursday, January 27th, something clicked between the players, as they defeated Lindbergh seven to five. From here on out, they won the last six games to complete the season at a record of seven-six-three. This included a dominant five to one win over Rockwood Summit, a Challenge Cup team, on senior night. These last six games were crucial to building momentum for the playoffs and giving the Cats a decent seed in the Wick.

The Cats were awarded the seventh seed in the Wickenheiser Cup and placed in a pool with Ladue (two seed), Clayton (ten), and MICDS (fifteen). Ladue was the first scheduled game and the beginning of the Cats playoff journey. This first game was a battle from the drop of the puck. Emily Griege, sophomore, and Maksim Bely, the opposing goalie, matched save-for-save until late into the second period. With one minute and twenty seconds remaining in the second, Tyler Deutsch tipped Kiran Varadachari’s shot to make the score one to zero, Rams. The Cats fought hard for the rest of the game but could not find a way to put the puck in the back of the net. Final score: one to zero, Ladue.

The Cats then took on Clayton and were eager to win this do-or-die game. Once again, the first period was quite actionless, as the score was zero to zero leading into the second. However, five minutes into the second, Zack Kilgore, junior, buried a slap shot to put the Cats in the lead one to zero. Just minutes later, Joey Morici, freshman, walked Clayton’s defense and put the puck top shelf over the goalie’s shoulder, making the score two to zero. From here, the Cats were fired up and everyone in the arena knew what the outcome of this game would be. However, the referees seemed to have a different plan and awarded the Cats six questionable minors through the entirety of the game. Nonetheless, they pulled out the win. Final score: four to one, Cats.

The final game of pool play was against MICDS. In order to clinch a spot in the semifinals, the team needed to win this game by at least two goals. The Cats took a quick two to zero lead within three minutes of the first period, but the Rams had an answer and struck back quickly to make it two to one. This was pretty much the tale of the game, as each team would trade goal-for-goal. However, with about ten minutes remaining in the third period, the Cats found themselves tied five to five. Caleb Bross, junior, came to the rescue shortly after and tallied his fifth goal in the past two games. Morici came in clutch with twelve seconds remaining and sealed the deal. Final score: seven to five, Cats.

After a few short days of preparation, the Cats headed back onto the ice to take on Francis Howell Central in the semifinals. The first game was a battle from the drop of the puck to the sound of the buzzer. Despite the Cats having 28 shots on goal, a mere one goal was scored in this game, as Brett Robinson of Howell Central scored his 38th goal of the season in just fifteen games. Final score: one to zero FHC.

The next game, including a mini game afterward, were both must-wins in order to advance to the next round. The Cats were the dominant team from the drop of the puck. After a solid first period with no scores, the Cats had a minor breakdown, letting in two goals in the first two minutes of the second period. However, the team was not going to give up as they battled back and scored four straight goals. Bross had himself quite the third period and scored a hat trick in just fifteen minutes. Final score: six to three, Cats.

A victory in the ten minute mini game is what the Cats’ season depended on. The team was tired after playing an entire 45 minutes prior; however, they were eager to move on. The opening minutes were looking promising, as the Cats controlled the puck in Central’s defensive zone. With eight minutes remaining in the mini game, the Spartans were given a penalty, and the Cats were awarded with a crucial power play. The power play was not what they expected, or needed at that, as Brett Robinson took the puck coast to coast and scored a shorthanded goal. From here, the Spartans scored twice more, sealing the deal with an empty netter. Final score: three to zero, FHC.