Over Christmas break, the girls made it to the championship game of a highly selective tournament. 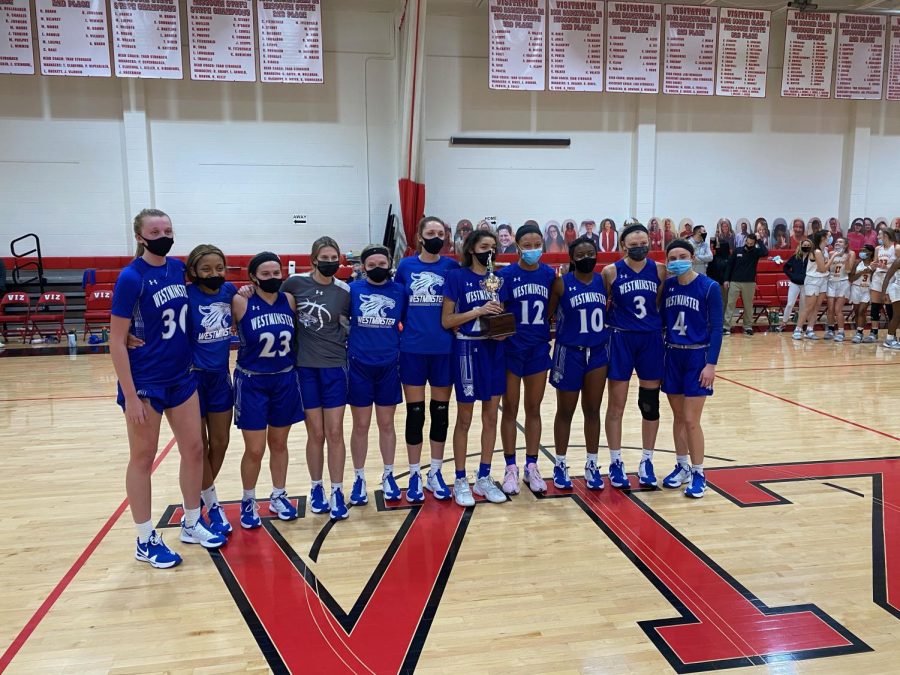 The girls basketball team was awarded the second place trophy after the championship game.

The Westminster Girls Basketball program has been improving steadily over the past three years. As the team is working to reach their maximum potential, the prestigious Visitation Tournament would be the test of how far they have come.

The Cats earned the number three seed behind Incarnate Word and Webster Groves, so in the first round of the tournament, they played the number fourteen seed, Visitation, who the team had already beaten in their first game of the season 59 to 21. The game came fresh off of a big win against the number one large school in the area and number two seed in the tournament, Webster Groves. Beating Webster by one point gave a huge boost of confidence to the team, but they could not let this confidence become cockiness that could spiral into a loss.

When the game began, the Wildcats’ confidence quickly declined as they could not seem to put the ball in the hoop. The first quarter became a panicked mess, and at half time, the team was down thirteen to eighteen. Lucky for the Wildcats, the third quarter is always a strong one. The girls came out ready and scored sixteen to Viz’s three points. The final score was a 44 to 33 victory for the Cats.

Next, Westminster faced Parkway North, the number six seed. The team came out energetic and set the tone for the game. North had many runs, but the Cats remained in control and ended the game 65 to 53 with Brooke Highmark and Julia Coleman scoring sixteen points each.

In the third round of the tournament, Westminster faced Webster again. After beating Webster by one point a week prior, they knew it would be a tough game. The Cats had the chance to prove once again how far their program had come. After a bumpy first quarter, Webster was up eleven to thirteen, but the Wildcats soon gained a smooth control over the game and won 52 to 41 including 23 points from Brooke Highmark and five blocks from Carlie Vick.

The Cats then reached the championship game against the number one seed, Incarnate Word Academy. Every year, this game draws hundreds of fans, including college scouts and media. Unfortunately, COVID-19 limited the stands to only a few parents, but many were streaming from home. Incarnate Word has one of the best girls basketball programs in the St. Louis area, but Westminster was confident in their ability to not only compete with but beat them; they knew it was going to be a tough fight.

In the first half the Cats trailed by as much as fifteen points but battled to stay in the game. At half, the girls trailed 24 to 32. The Wildcats knew that they could do better. They dug deep and won the third quarter by one point, but that was not enough. Going into the fourth quarter, Incarnate was up by a mere 40 to 47, but many Westminster players were in foul trouble. The Cats began a major comeback and shrunk the point differential to one point, but they ultimately fell short after some vital free throws from Incarnate. It was a hard fought game, but Westminster lost 54 to 58 with 21 points from Carlie Vick.

Before the championship game began, three of the Wildcats received recognition for their performances throughout the tournament. Carlie Vick, junior, and Julia Coleman, sophomore, were both selected for Second Team All Tournament while Brooke Highmark, junior, was chosen for First Team All Tournament for the second year in a row.

While the Cats are proud of how far they have come, they recognize their abilities and will not settle until they have reached their full potential. Lucky for the cats, they play Incarnate Word again on January 22nd at home.