Westminster Outlasts Borgia to Advance to the District Championship Game 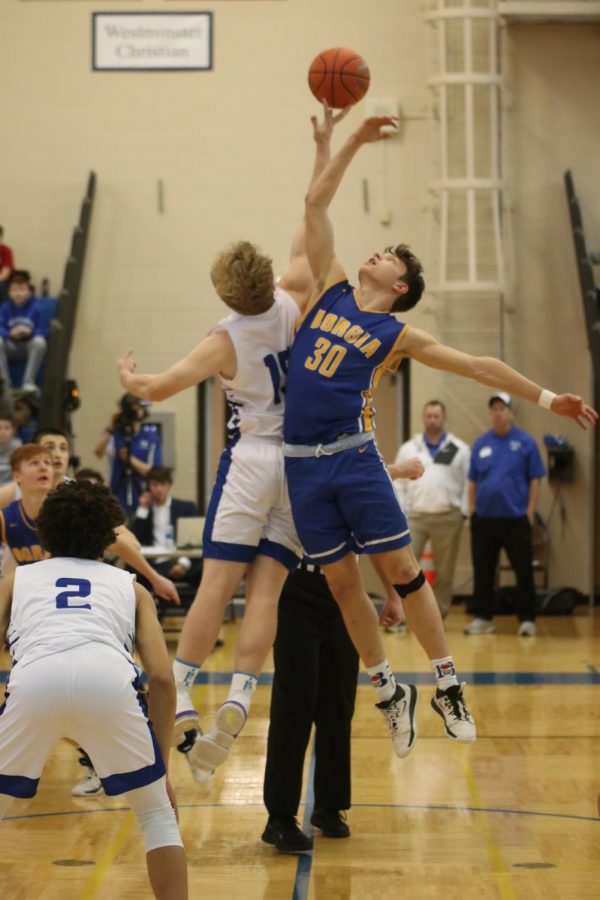 Brennan Orf takes the tipoff in the District Semifinal against Borgia.

The stage was set.

After the girls knocked off the Lady Knights on Monday evening, Borgia got a shot at redemption with the boys team. The Arena was jam-packed with supporters of both teams. Many Borgia fans made the trek from Washington up to Westminster to watch their beloved squad battle the Wildcats for the second consecutive night.

Even the 800 Sporting team had this game marked on their calendar. They ran a live broadcast of the game so that everyone could see the big game.

With all this anticipation, the game surely lived up to the hype.

The Wildcats immediately stole the momentum out of the gate with a couple of early threes rattled in by Casen Lawrence, Kobi Williams, and Matt George. After an EJ Williams and-one at the end of the quarter, it seemed like the Wildcats might run away with the game. They took a commanding 18-10 lead into the second quarter of play.

They were in for a rude awakening.

The Knights responded with a blazing second quarter that featured five three-point makes. The Westminster offense was stifled and committed a barrage of turnovers- something we rarely see out of this team at this point in the season. As the final seconds trickled down, the Wildcats trailed 29-27 going into the half.

This was unchartered territory for Westminster. This team has yet to lose on their home floor, and it seemed like the Knights might have found the formula to do so.

But Brennan Orf had other plans in mind. As Coach Ribble said in the team huddle, “If Brennan Orf is there, then get out of his way.”

Despite fighting double and triple teams all night, he still mustered to score the first eight points of the third quarter for the Wildcats.

With the score knotted at 35, Kobi Williams found his stroke and knocked home a corner three to give Westminster their first lead since the middle of the second quarter. These efforts propelled the Wildcats to a mere 40-39 lead after three quarters of play.

With just one point deciding the game, it figured to be a back and forth affair the rest of the way.

The Wildcats went up six in the blink of an eye thanks to a couple of Caleb Thompson layups, as well as a deep Casen Lawrence three-pointer.

Borgia tried to creep back into the game after forcing a couple of Wildcat turnovers; however, a block and a Borgia turnover effectively put the game out of reach.

But the game was not over. Not yet.

It was not until Brennan Orf threw down a ferocious slam on the press break to put the Wildats up by 11 in the last minute of play that the game was finally over. The student section overflowed onto the floor, and the crowd roared in appreciation of Orf’s marvel.

With this, Westminster went on to win by a final score of 56-45. Although the game was in question early, the Wildcats’ ability to play as a complete team was enough to put them over the top against a tough Borgia team.

The team still has five more to go. Next in the path of the Wildcats’ road to state are the Priory Rebels. The two teams, playing for the third time this year, are set to fight for the District Championship on Thursday at 7:30 PM.

Be there and be loud to support the Wildcats in what figures to be a hard-fought battle against a conference rival who would love nothing more than to end the Wildcats’ season in front of a Sea of Blue.