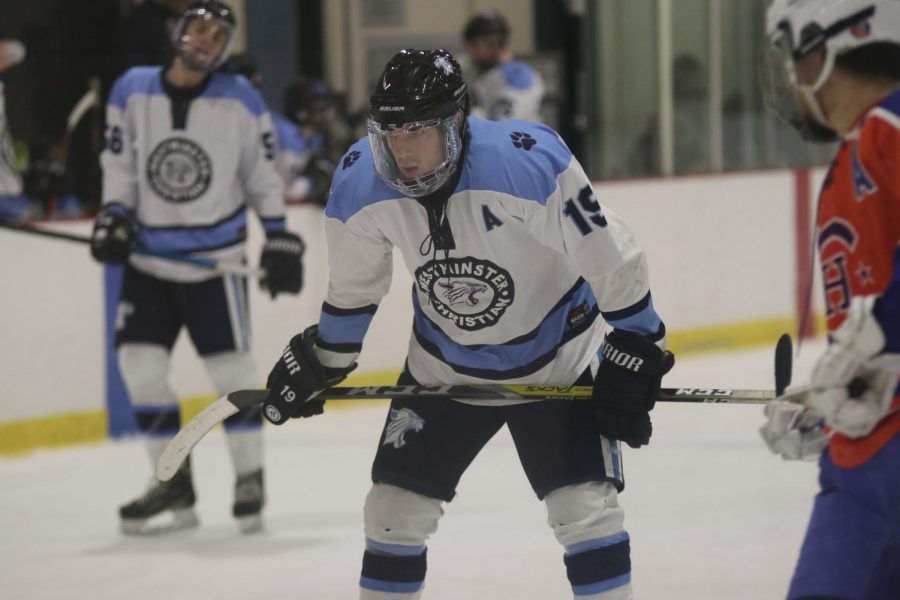 Ben Parres has been a leading scorer for the Wildcats this year.

Going into the Wickenheiser Cup Playoffs, the Westminster hockey team was given the fifth seed in the tournament. The opening round was played out in a pool play format, with the team going up against the fourth, twelfth, and thirteenth seeds.

In the first matchup, the Wildcats took on Clayton, who was awarded the thirteenth seed. The team got off to a slow start tying the first period 1-1 on a goal from Collin McCarthy.

Seconds in to the second period, Clayton took a 2-1 lead. From here on out, the Wildcats turned it on and didn’t look back. Scoring the next six goals to win the game 7-2, highlighted by a Ben Parres natural hat trick.

In the second game, Wentzville Holt came down to Queeny Park to have their season ended by the Wildcats. It was a hard fought game with little to show for it on the scoreboard. Harry Ottsen put the Wildcats on top with a rebound goal in the second period. With continued stellar play from freshman goalie Emily Griege, the Wildcats were able to keep the shutout and win 2-0. The win moved the team officially into the second round.

With the top 3 seeded teams, Oakville, Lindbergh, and Duschene respectively, moving on to the quarterfinals, the Wildcats went into their final pool play game against Fort Zumwalt East knowing that they would be the next round’s opponent. It was a close game that went back and forth all night, but a few bounces didn’t go the way of the Wildcats and they dropped the game 4-2.

The quarterfinal round is a three game series with a twist. There are two normal games that will be played out and if there is a split or both games end up tied, there is a “mini-game” immediately following Game 2.

Fort Zumwalt East is an offense-heavy team. They have the leagues top point scorer, Gabe Vierzba, accompanied by a few other talented forwards. But their soft spot comes from the back end. They have one solid defenseman but the depth drops off after that. Another weakness comes between the pipes; their goalie is not the strongest nor does he have the greatest rebound control. Getting as many pucks to the net as possible will be a key factor for the Wildcats this round. It should be a close series with a spot in the final four on the line.