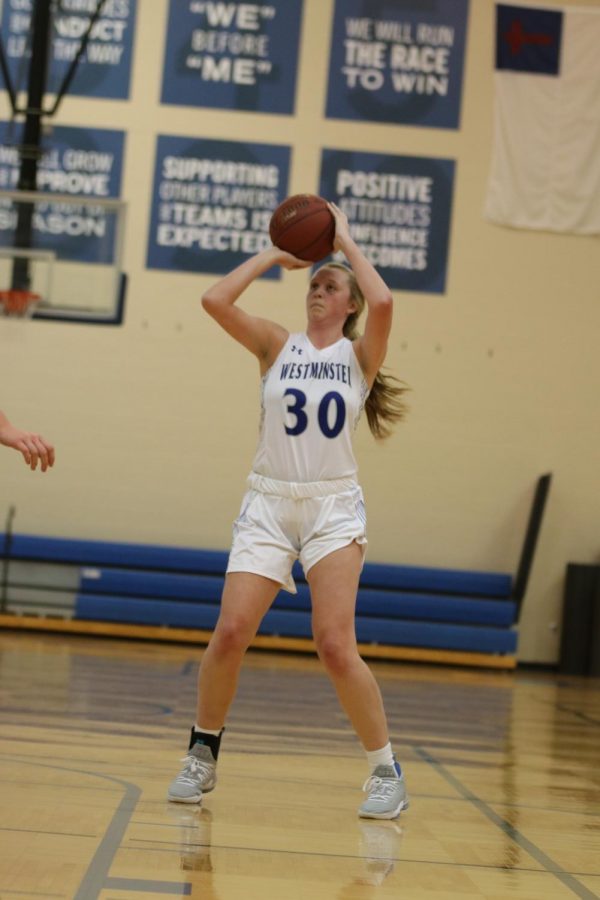 Carlie Vick, the star of Friday night's game against Parkway North shoots a midrange jumper during a game against Duchesne High School.

The girls basketball team pulled off an historic win in a nail-biter against Parkway North with a score of 53-49. The Vikings previously had a 10-4 record including an 18 point victory against last year’s Class 4 state champions, Incarnate Word Academy. The Wildcats have had a prolonged losing-streak to Parkway North, including last year’s district championship game, so the team is elated to finally walk away with the victory.

In the first quarter, Westminster came out with strong shooting from deep range to take a 14-11 lead. In the second quarter, the Vikings went on a run, knocking down shots left and right to regain the lead at halftime 26-24. In the third quarter, the Wildcats had to pay close attention to North’s point guard, Aliyah Williams, whose quickness and three-point range kept her team in the game. The fourth quarter was neck-and-neck as both teams experienced a great deal of adversity. Through strong free-throw shooting, defensive communication, and composure, the Wildcats were able to pull away and seal the game by a margin of four points.

Westminster has not beaten Parkway North in girls basketball since 2006. The teams have played three times since then, all after 2018, and the Wildcats haven’t lost by a margin of more than six points in any game. Tonight was the revenge trip.

Carlie Vick, a sophomore, contributed enormously to the Wildcat’s victory with a double-double including 17 points, 11 rebounds, three blocks, and two threes. It was a career night for the six-foot-one center. Brooke Highmark, also a sophomore, impacted the game as well with 20 points.

The win against the Vikings concluded Westminster’s three-game undefeated week against Carnahan, Parkway Central, and Parkway North, all adding to their current five-game winning streak.

The Westminster girls basketball team has continued to prove their worth by consistently pulling off unexpected victories against large and well respected schools. The team’s combination of skilled veterans and talented newcomers has made the Wildcats a force to be reckoned with. As the untapped potential on the team continues to unravel and players like Carlie Vick continue to develop more and more confidence, the Wildcats are almost certain to have a very successful rest of the season.