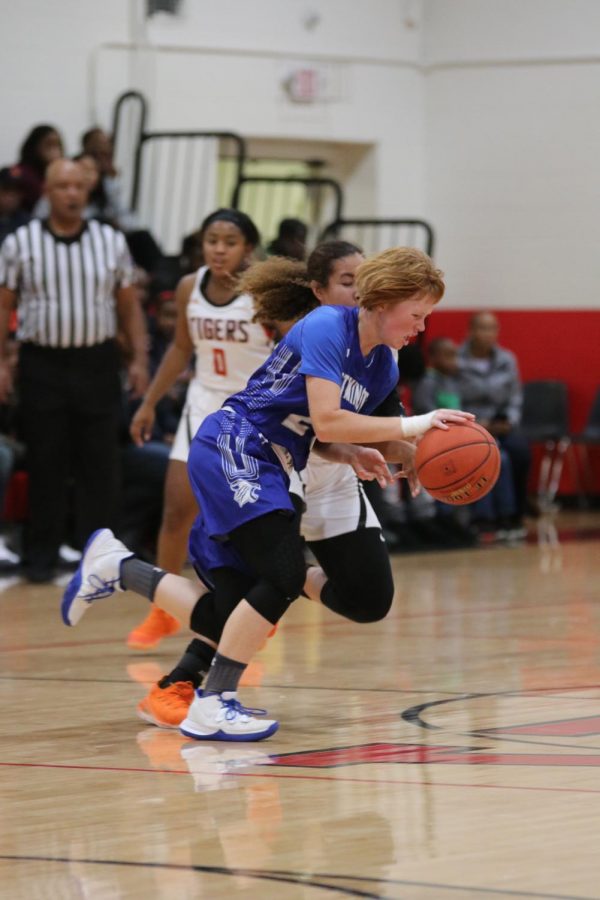 Carsyn Beachy fights to bring the ball up the court during a game against Edwardsville in the Visitation Christmas Tournament.

Every year, Visitation hosts sixteen teams for a highly prestigious invitational girls basketball tournament over Christmas break. This year, the girls varsity basketball team was invited to the Visitation Christmas Tournament for the first time.

“The prestige and opportunity to play in this tournament and the respect it brings not only our program but also our academy is very significant. It allows us, as a very talented team, to play some of the best teams in the greater St. Louis Area and gain great experience to prepare us for our postseason goals,” said Kat Martin, girls basketball head coach.

In the Wildcats’ first year in the tournament, they were seeded 7th and finished in 6th, which proved to the doubters that they belong in the tournament. As a result, they were invited back. Proud of their accomplishments and excited for years to come, the girls were very upset to hear that for the next two years, the second round of games fall on a Sunday. For most schools, this would not matter, but Westminster does not allow school related events to take place on Sunday.

“As a school, Westminster decided many years ago that we would not schedule anything on Sundays. This is much more than just an athletics thing in the school,” said Cory Snyder, Athletic Director.

In order to better understand the dilemma, it is important to understand what obeying the Sabbath means. This policy is rooted in the fourth commandment: “Remember the Sabbath day by keeping it holy,” Exodus 20:8.

“Briefly put, the fourth commandment about the Sabbath is intended for the delight of a follower of Jesus… I don’t think the Sabbath commandment restricts all types of activity… Recreation can give a window into the joy we’ll have in the new heavens and new earth,” said Luke Davis, Westminster bible teacher.

The Sabbath was not created to restrain Christians, but instead Christians are commanded to keep the Sabbath holy for their own good. The right amount of rest is a good thing, and it will end up benefiting Christians in the end.

There have been two exceptions to the observing the Sabbath policy in Westminster history: once for a state championship baseball game in 2013 and once for a musical. The state baseball game was scheduled for an earlier date, but due to a tornado and rain, the game postponed. The last day MSHSAA would allow the game to be played was on a Sunday. After being told they couldn’t play in the game, the team called for an emergency board meeting and received permission to play the game after attending church as a team.

Similarly, the musical was scheduled for Friday, but due to a power outage, they could not perform. Under those circumstances, they were allowed to reschedule Friday’s performance for Sunday. These are the only exceptions ever made to this school wide policy.

“Both of those decisions were made due to factors outside of our control and with limited to no alternatives,” said Snyder.

Coach Kat has made many efforts to make a case that this situation calls for a similar exception, but she is yet to be successful. “Because the tournament is not interfering with Sunday morning service, I believe a game after 12 PM would be appropriate in unique and special circumstances. My hope is to come to a middle ground which respects both the Sabbath and the significant opportunity being presented to our program,” said Martin.

A possible compromise is the idea that Christians can observe the Sabbath on any day, not just Sunday. “I don’t think one has to say one day over another is the Sabbath. One can worship on Saturday, on a Friday night, or on Sunday…the early church was worshipping on Sunday as can be seen in Acts 20:7 and I Corinthians 16:1-2, but Paul also admonishes the Colossians not to be strict about an exact day of the week. The main thing is that if you are a follower of Jesus, you should be intentional about a Sabbath somewhere in your weekly rhythm,” said Davis.

Davis also notes the difference between an individual obeying the Sabbath and an institution obeying the Sabbath. “On the issue of being willing to attend church before the games, I think that is admirable, but I also think the athletic department is on to something here,” he said.

“Any institution has standards and/or policies that individuals may follow or not follow in their personal lives… It also does not mean that one is right and the other is wrong, it’s just the difference between the corporate and the individual,” said Snyder.

“As individuals, we might have our own practice. As a school, we are also called to show allegiance to Christ that is deliberately, distinctively, and delightfully different from the fast pace 24/7 culture around us. An athletic team represents a school, and if the school has a general policy (written or unspoken) in place, then the general principle is to submit to the policy if it does not conflict with Scripture … This is not to say exceptions don’t arise,” Davis added.

“We are not forcing families to denote Sunday as their Sabbath but we are providing them an opportunity to have a day in which they know that Westminster will not schedule anything,” said Snyder.

For students, academics and athletics are their jobs. “As students engage in their academic and athletic activities connected to school, one can argue that is their ‘labor’, their dominating portion of work for the week, and God wants us to take time to rest from labor for our benefit and enjoyment,” said Davis.

Although the fourth commandment is not explicit in its interpretation, as a Christian school, it is important to stand apart from the culture. Davis admires Brigham Young University for keeping Sunday as a Sabbath day by refraining from athletic and academic activities.

“They are willing to stand out from the surrounding culture and be distinct, to pursue what they believe God has called them to do because faithfulness matters more than blending in.”

“We understand that sometimes living out our faith and convictions as a school requires sacrifices that the general culture might not understand, we also want to protect ourselves from being strictly legalistic. There are certainly times and situations that require us to think about our policies… there are other times when we hold the line against cultural pressures and make sacrifices,” said Snyder.

Davis challenges the community with a key question. “The question we need to ask, not just athletically but if one is a follower of Jesus, is this: Do I try to schedule God around the events of my life, or is He the King of the unfolding story of my days? Am I inviting Jesus to speed through life with me, or can I notice Him sitting quietly nearby so I might join Him?”

While there is controversy on what it looks like to obey the Sabbath, Westminster leadership believes that students should not partake in any school activities on Sunday. While it is unfortunate that this policy excludes the girls basketball team from the Visitation Christmas Tournament, as a Christian school, the athletic department believes they must stand firm in their values.