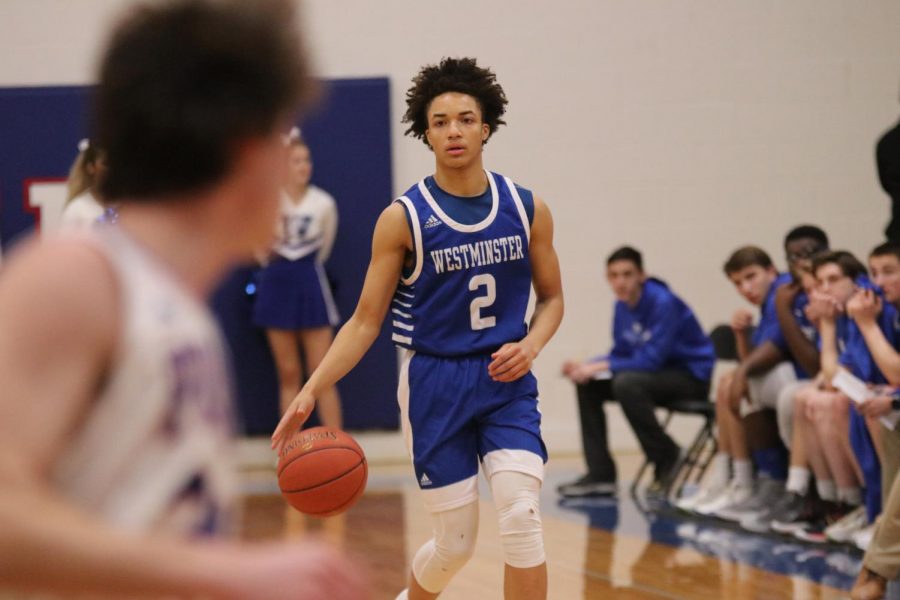 EJ Williams brings the ball up the floor in a game against Priory on Tuesday, January 21.

The boys basketball team earned a statement win on Tuesday night after defeating the Priory Rebels by a score of 54-30. Coming into Tuesday, the Rebels had a record of 11-2, but that didn’t show at all during the game. It was never really close as the Wildcats raced out to an early 14-5 lead due to three triples from sophomore Casen Lawrence. He would finish with 21 points on the night.

Throughout the first half, Priory was stuck in the mud. Their offense, highlighted by 6’8” center Harrison Wilmsen, could do nothing at all. On the other end of the floor, the Wildcats were hot. At half’s end, the Wildcats led 28-10 and Casen Lawrence had contributed 15 of those 28.

The second half belonged to other players, though. Sophomore Caleb Thompson came alive, finishing the game with ten points and seven rebounds. The amazing part of Caleb’s statline is that six of his rebounds were on the offensive side. He was able to give the Wildcats second and third chances to score on each possession. In total, the Wildcats won the rebounding battle 29-17.

The defining moment of the game came in the fourth quarter. The Wildcats were on defense, and Brennan Orf knocked a ball loose on the wing, sending the ball rolling towards halfcourt. Unable to secure possession, Orf laid out and swatted the ball, sending it towards the Westminster offensive side of the floor. Both Casen Lawrence and Caleb Thompson flew after the ball, laying out and landing on the ball at the same time as a Priory player. Play was stopped and a jump ball was called.

This play represented the intensity that the Wildcats played with on Tuesday and have been able to maintain throughout their hot streak in their last five games. The play sent Coach Ribble down towards the baseline clapping and screaming “Get up! Get up!” to his players on the bench.

Another interesting part of Tuesday was Brennan Orf’s play. You’d be hard-pressed to find a game where Orf was actually a “non-factor”, but he actually only scored four points. He contributed elsewhere, finishing with ten rebounds, four assists, and three steals. Even when he doesn’t score a lot of points, his presence is still felt. Priory center Harrison Wilmsen was entirely unable to back Orf down throughout the game. Instead, he was forced to face the basket and shoot jump shots rather than taking a power dribble and having an easy layup.

This was a statement win for the Wildcats. With his 6-9 performance from three tonight, Casen Lawrence now shoots just a tick under 40 percent from beyond the arc on the year. That’ll scare some teams on the film room. Priory will be a district opponent of Westminster come March, and this victory was important for seeding as well as confidence and momentum. What was supposed to be a close team between two conference rivals quickly turned into a blowout and stayed that way until the final buzzer.

On Friday, the Wildcats will take on the 5-10 Lutheran South Lancers. Call it some more revenge for last year’s heartbreaker at the Ark. Call it the prelude to the Spirit Night game. Call it whatever you want, but just know the Wildcats are hot. When you pair good shooting with Brennan Orf, you get a combination like peanut butter and jelly(fam). Like Luke Skywalker and the Force. Like watching TikTok with hours and hours of free time. You just can’t stop it.