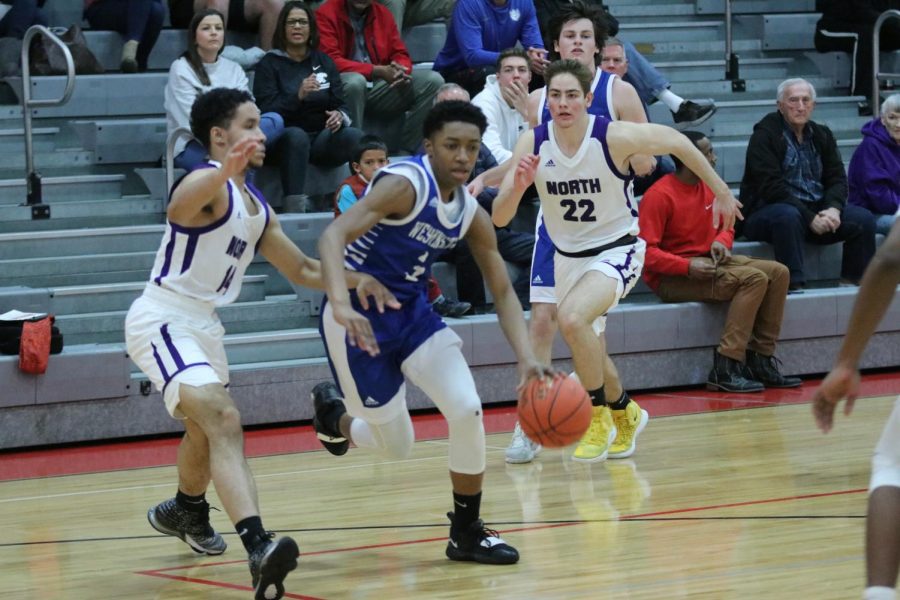 Kobi Williams dribbles through pressure during a game against Parkway North in the Chaminade Christmas Tournament.

Over the Christmas break, the boys basketball team participated in the Chaminade tournament, playing three games in a round-robin style event. The Wildcats finished with a 2-1 record over the three games, losing their first game to Parkway North and then taking wins against Hazelwood West and Francis Howell North.

In the first game, not much went right for the Wildcats. They were 3-19 from three-point range and could not get the ball in the hoop to save their lives. On the defensive side, it was hard to contain the tough Viking offense, who barely missed anything in the first half. Brennan Orf lead the pack with 26 points on the offensive side and collected seven rebounds. Despite the strong effort for the Wildcats, the final score was 64-53 in the loss for the Wildcats.

Brennan Orf collected his fourth double-double of the season, racking up 27 points and 11 rebounds. Matt George and Casen Lawrence contributed the only three-pointers of the game and had totals of seven and nine points in the game, respectively.

The final game was most definitely the most exciting for Westminster fans as the Wildcats took a twenty point win against the “un-un-defeated” Francis Howell North Knights by a score of 62-42. The Wildcats had the lead for most, if not all, of the game and the Knights could not stop the bleeding. The talk of the entire game was the spark that senior Matt George put in the team’s offense, shooting 6-7 from beyond the arc and finishing with a career high 20 points. Also contributing to the team’s offense were Casen Lawrence and Brennan Orf, each collecting 13 points a piece. Lawrence, like George, also had an impressive day from three-point territory, going 4-6 from downtown.

When giving recognition to the two most memorable players for the Wildcats in the showing at the Chaminade tournament, it is clear that the first player to shout out is senior Brennan Orf. It’s hard for any player to beat the numbers that Orf are putting up day in and day out. He’s averaging 19 points and nine rebounds a game. In the tournament, Orf used his height and athleticism to get around almost anyone in the paint, and when he gets in there, it’s going to take more than a train to stop that man.

The second person that 800 Sporting would like to acknowledge is senior three-point specialist Matt George. Matt had decent games offensively against Parkway North and Hazelwood West, scoring six and then seven, but his most dominant affair was in the final game. George was definitely the X-factor in that game, leading the team to the landslide victory.

Casen Lawrence commented on Matt George, claiming how when he is having a good game, the outcome is almost always positive.

“When Matt shoots well we all seem to shoot better,” said Lawrence. “It’s great to see him shoot well because he is such a hard worker and we all know what he’s capable of.”

Overall, it was a solid effort for the Wildcats in the Chaminade tournament. Coach Ribble is continuing to work the boys harder and harder each game and the results from his coaching are certainly paying off. The team has plenty of more success coming in their future and it will most definitely be a good year to be a Wildcat basketball fan.

The next game for the Wildcats comes up Tuesday night at Lutheran North. Then, Friday night, they play the MICDS Rams at 7 pm on the home court as they look to continue their hot three-point shooting run and finally knock down the Rams.