Wildcats Come Up Short Against MICDS in Tip-Off Tournament Championship 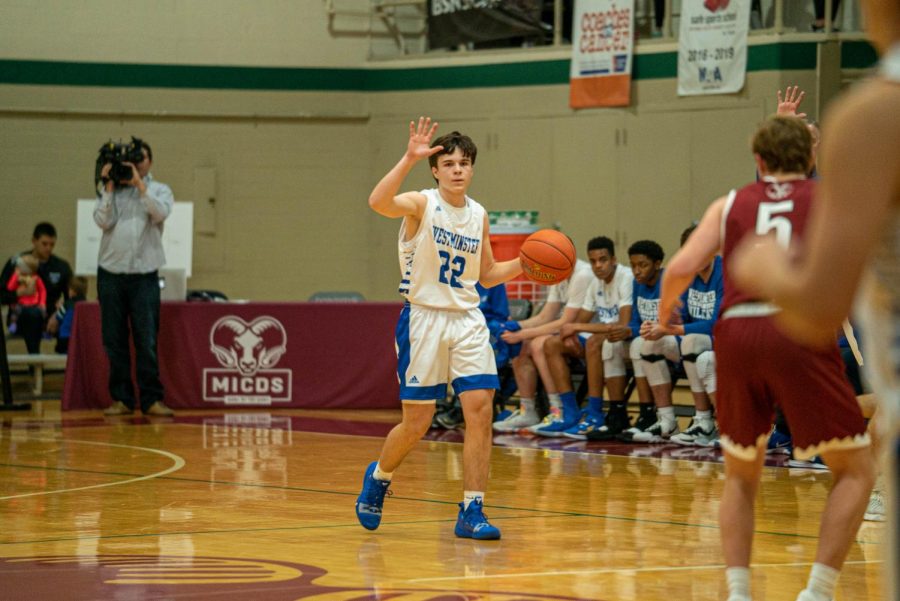 Casen Lawrence brings the ball up the court in the championship game of the MICDS Tip-Off Tournament against MICDS.

The Westminster boys basketball team suffered their first loss of the season on Friday in a highly anticipated matchup with the Rams of MICDS. The game drew quite the crowd as many students from both Westminster and MICDS filled the bleachers to witness the championship game of the MICDS Tip-Off Tournament. Unfortunately, the Wildcats were unable to pull through when the stakes were the highest.

The Wildcats struggled out of the gate. MICDS quickly went on a 7-0 run to put themselves ahead early. The height difference between the two teams was evident in the early stages with Westminster being unable to defend the paint. The offense also had real difficulties scoring early, leading to a 10-3 deficit at the end of the first quarter.

However, the Wildcats finally did find their stride in the second quarter. Senior Brennan Orf energized his team by snagging rebounds, diving for loose balls, and fighting for buckets down low. This effort from Orf allowed the Wildcats to claw their way back into the game, but they still trailed 20-17 at the half.

As the third quarter began, it seemed that points would be at a premium. Unfortunately, this was not the case for MICDS. The Rams got hot from three-point land and went on a huge run in the middle of the quarter, stretching their lead to as many as 14 points.

But the Wildcats were not done. Sophomore EJ Williams scored a couple of buckets down the stretch to cut the lead to as little as five points in the fourth quarter. Despite this effort, the Rams were able to hold off the Wildcats’ attempt at a comeback. They were able to ice the game by converting their free throws late, and thus, take the championship.

While the Wildcats may have come in as the runners-up, there are still plenty of positives to take from these first three games. The Wildcats showed signs of resiliency many times in this tournament, giving hope that they can close games late, something they failed to do for the most part last year. They will also face the MICDS Rams twice more in conference play for two more shots at redemption for this preseason loss.