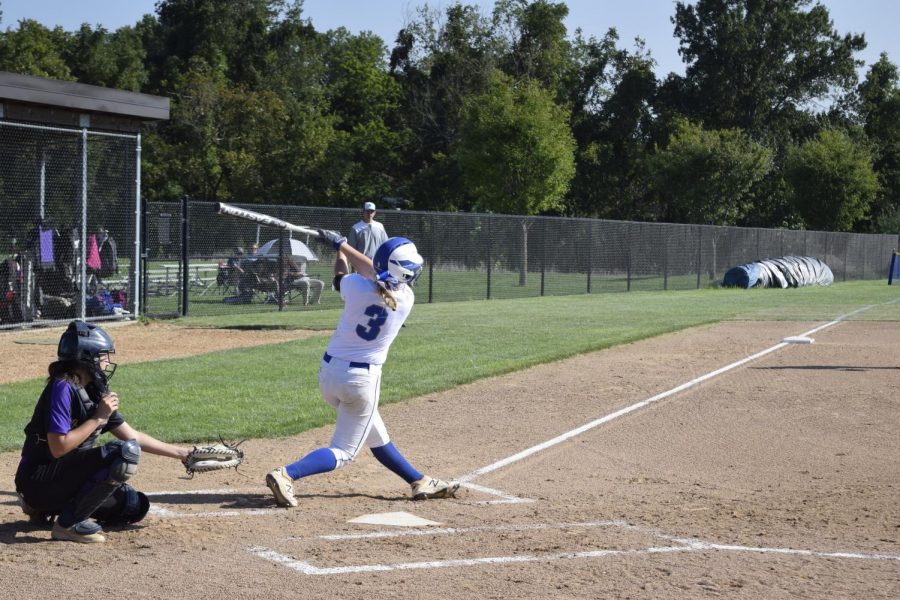 Reese Earleywine at the plate during an early season matchup.

As she rounds third and heads home after tanking a ball over the fence, she flashes a little dance move of her own before she slaps Coach Petke’s hand.

This athlete is one of the most dominant fall athletes that we have seen at Westminster this year. For that reason, it is easy to say that softball player Reese Earleywine deserves to be the 800 Sporting Player of the Month for September.

Reese Earleywine, senior shortstop, has been a part of the Westminster varsity softball team since her freshman year, and even then she was making herself known. She had the third most runs batted in during her freshman season, and that was just the start. Her sophomore season was the one that put her on the map, driving in twenty-three runs and knocking three balls over the fence. She led the team in both categories. In last year’s historic softball season, she had twenty-six RBIs and a .464 batting average.

Thus far in the season, Earleywine has guided the offense, hitting in the three-hole for the 6-6 Wildcats. Statistically, Earleywine is leading the team in almost every possible category. She is looking at a slash line of a .514 average, .583 on-base percentage, and .935 slugging percentage. Also, she’s looking to break her personal records in RBIs and home-runs, having 14 RBIs and already having hit three homers.

On the defensive side of things this season, Earleywine has a .85 fielding percentage from the shortstop position while also rolling four double plays and getting 45 total outs.

Despite her essential talent to the softball team, she also displays leadership towards her teammates that helps them strive towards being the best team that they can be.

“I think Reese is always looking to help people improve and isn’t shy to help people in a constructive way because she really wants to win,” said Marty Briner, junior teammate. “She wants to help everyone on the team succeed.”

Earleywine admits that when she was a freshman and sophomore, Deanne Pfyl, class of 2018, helped her become more comfortable with the team atmosphere and also acted as a mentor figure to her. Because of the role Pfyl had on the team, Earleywine strives to be like her and to be a captain that is a good example to her teammates, especially the younger ones.

“I want to prepare the younger girls for their leadership roles in the future because it comes faster than you realize,” said Earleywine. “My freshman year feels like yesterday.”

Coach Petke, head coach, said that he noticed tremendous growth within her talent and leadership skills on and off the field this season: “[Reese] has provided a huge bat in our lineup, and we can always count on her to come in clutch. As far as her leadership goes, she has been a great role model for the younger players in the program.”

When asked about her leadership role on the team, Earleywine said, “I want to leave a lasting impact on all the underclassmen because they still have not only softball but also a whole high school experience to go through.”

With her final season slowly coming to a close, Earleywine is setting her focus not only on having a season for the books but also having some fun with the season and the girls on the team in order to make it as memorable as possible.

“It’s my senior year and now I want to do my best because it has never been fun when I stress myself out,” said Earleywine. “Mr. Petke has preached to me to overcome my emotions, and if I am hard on myself, it trickles down to the rest of the team. I’m trying to just breathe and have fun with it.”

With her work ethic, personality, and most importantly, talent, there is no doubt that Earleywine will leave a strong legacy for younger athletes to come in the Westminster softball program. She will forever be recognized for all that she has done in transforming the team and also for being one of the most talented softball players in Westminster history.