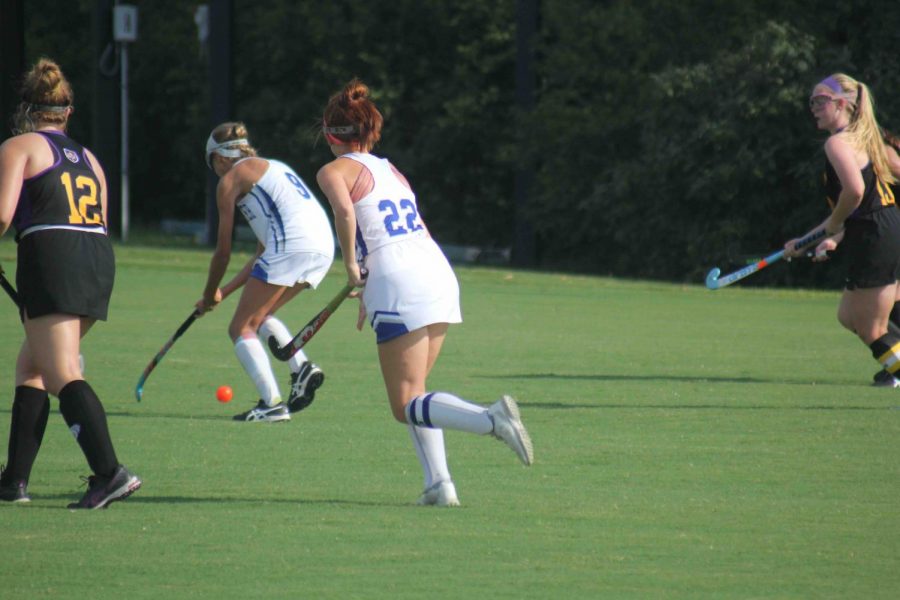 Senior Captain Luci Hillboldt was a key leader of the Defense this year!

In the second week of the season, the Wildcat field hockey team picked up their first two wins of the season in a beatdown at Lutheran South and a shutout against Rosati-Kain.

During week one, the team started with a 1-0 loss to Clayton and then followed that with a 9-0 loss against John Burroughs. Week one was a week to forget about and to use as motivation for the remainder of the season as the Wildcats hoped to bounce back.

Well, they bounced back.

In the first game of week two, they played at Lutheran South. In that game, everything clicked. There was constant ball movement throughout both halves which allowed them to pick up 19 shots on net. In the first half, senior Alyssa Legters knocked in three goals as hats began to fly on the field. All three were assisted by sophomore KK Pruett. After South put one in at the end of the half, KK Pruett ripped her first goal of the regular season after a pass from freshman Elizabeth Clawson. The final was 4-1 in favor of WCA.

In game two, goaltender Sabrina Granata shut down Rosati Kain in the 2-0 victory. The game was controlled by the Wildcats’ offense, who put 19 shots on goal. The ball was in their offensive zone for almost the entire game, forcing Granata to make fewer than five saves. The first ended with a tie at zero, but with 12:52 remaining in the game, KK Pruett slapped one past Rosati’s goalie. One minute after Pruett’s goal, senior Libby Thomas snuck one into the corner of the goal after Alyssa Legters pass was completed.

Granata made seven saves this past week for the team, one of which was a crucial stick save to secure the shutout against Rosati, and she allowed in only one goal.

As the offense controlled these games, the defense was also a force to be reckoned with. Jamie Obertop, freshman, and Luci Hilboldt, senior, tracked down almost every ball and were able to clear it downfield with authority.

This upcoming week, the team enters a tough stretch of games as they take on Villa and Visitation. Villa is coming off of a big 5-0 win against Summit while also beating John Burroughs 4-2. Visitation recently beat Barat Academy 7-0 and beat St. Joseph’s Academy 1-0 two days before that. Pruett and Legters are heating up at the right time as they take on these two powerhouse schools.